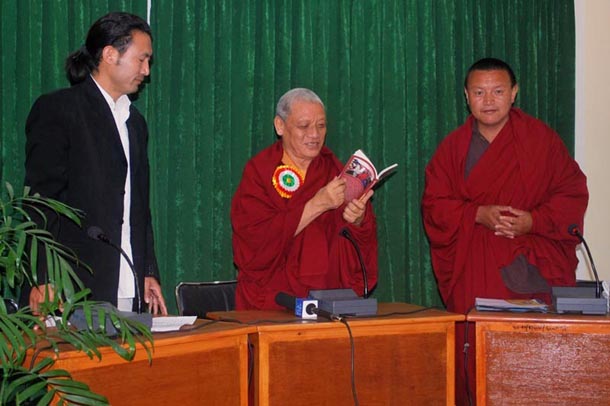 Dharamshala: Kalon Tsering Phuntsok, the minister of the Department of Religion and Culture, Friday launched the eighth book named A Difficult Road of a former political prisoner of Tibet Ven Bagdro. The Tibetan writer said, on releasing the book said he has fulfilled his purpose to come into exile in India which was facilitated by his fellow political prisoners in Tibet.

Ven Bagdro's fellow political prisoners collectively contributed Chinese Yuan 1,500 to send him to exile to appeal His Holiness the Dalai Lama, Central Tibetan Administration, Tibetans and the international community about the plight of Tibet and the sufferings of the Tibetan people.

Despite being away from his dear parents, and facing many difficulties, he is pursuing his important work to tell the world about Tibet, added Ven Bagdro.

The writer on the occasion said in this book he has written about the Great Fifth, Thirteenth and the Fourteenth Dalai Lamas to express his gratitude to them for their boundless blessings to the Tibetan people.

Tsering Phuntsok said His Holiness the Dalai Lama is making his best efforts to resolve the issue of Tibet, to preserve Tibet, and its religion and culture. But Tibetans themselves should take more responsibilities in this task.