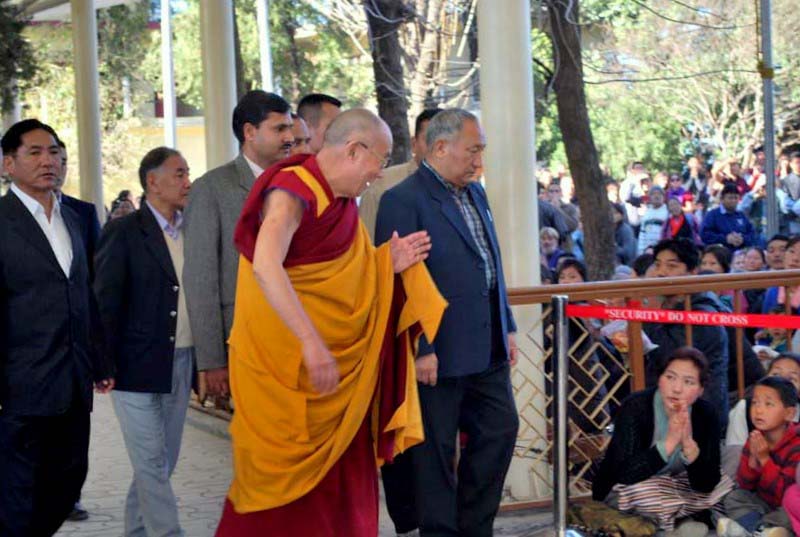 London: - While countries such as Libya and Egypt fight to overthrow their leaders, Tibet are insisting theirs stays in power. The Dalai Lama has ruled longer than Colonel Gaddafi and Hosni Mubarak combined, yet His Holiness's dedication and compassion has left women crying in the streets and politicians pleading in parliament in the wake of his announcement of retirement. For the Tibetan people, His Holiness is understandably considered irreplaceable, however, his announcement has forced people to assess a future without His Holiness the 14th Dalai Lama.

Since the 5th Dalai Lama's move to secular and religious rule in 1642, Dalai Lama's have had complete control over the running of all aspects of Tibetan life. It is unsurprising therefore that the Tibetan people are wary of such a historic shift in ruling. His announcement has not come as a colossal revelation, democracy has been taking supported steps since the 1960s. The Dalai Lama was instrumental in these improvements and has formed the support, which the Tibetan Government in Exile has more often than not used as an excuse to avoid drastic changes, leaving decisions up to His Holiness. Since the creation of the Kalon Tripa role in 2001, His Holiness the Dalai Lama believed that the role of leader of Tibet would be shared, however, in his speech to the parliament following his announcement he was clear that this hadn't happened, "No system of governance can ensure stability and progress if it depends solely on one person without the support and participation of the people in the political process. One man rule is both anachronistic and undesirable."

Despite His Holiness the Dalai Lama's strong aspiration to retire, the outgoing Kalon Tripa is highly apprehensive, stating that without His Holiness the Dalai Lama, the legitimacy of the Tibet Government in Exile might be undermined. The exile community, he said, has been functional largely because its members accepted His Holiness the Dalai Lama's authority. It is critical, as the Kalon Tripa has highlighted, that the Tibet Government in Exile needs public approval to succeed in the future and with the elections yet to take place and with previous poor attendance, its legitimacy remains to be seen. Penpa Tsering, the speaker of the parliament has also voiced his unease, believing that up to 90% of the members of parliament feel there is no way that the Tibetan cause and His Holiness can be separated. The political representatives have yet to make their decision on whether or not they will allow the changes in the constitution to be made to allow His Holiness to retire but discussions are set to rage on until the 25th March.

The changes in the constitution are in essence His Holiness' last will and testament, setting out how Tibet can continue after the loss of its sole figurehead. The change will put the responsibility for Tibetans physical well-being at the feet of secular rulers. He understandably wants to break with tradition and set the hand over of power in motion prior to his death to avoid the likelihood of religious and political chaos. The Tibetan community has been in a constant state of uncertainty since the Chinese invasion and His Holiness the Dalai Lama's aim is to create some sort of stability. During His address on the 14th of March to the members of the Fourteenth Assembly of the Tibetan People's Deputies, he made this

aspiration clear, "it is necessary that we establish a sound system of governance while I remain able and healthy, in order that the exile Tibetan administration can become self-reliant rather than being dependant on His Holiness the Dalai Lama".

The legacy His Holiness is putting into place will outlive him, for that reason he has been so adamant that he be allowed to step down. After the death of His Holiness, there will be no strong advocate for a non-violent movement with the Panchen Lama disappeared and the Karmapa ordinarily shying away from political matter it will be the task of the government to avoid the radicalisation of a generation. If the non-violent approach is not upheld, China will yearn for the stability His Holiness ensure and come down harshly.

A further religious motive for His Holiness' move to retire politically is to avoid religious duplication. There is a distinct likelihood that when His Holiness the Dalai Lama dies in his stead will be two Dalai Lamas both vying for the acceptance of the Tibetan and international community. Much like that of the Panchen Lama and the Karmapa, one will be indentified by the Tibetans living in India, the other will be chosen by the Peoples Republic of China. The Chinese government recently passed legislation stating that the government alone has the absolute say on choosing the future Dalai Lama. Both Dalai Lamas will be chosen via untraditional means, since the 14th Dalai Lama says that his reincarnation will not be born inside Tibet while it remains under occupation and the other chosen by secular administrative means. Isolated from the traditional methods of selection, the Tibetan Government in Exile will pivotal in promoting the true selection to ease Tibetans inside Tibet who will undoubtedly be caught up in the emotions of having a Dalai Lama back on Tibetan soil.

Despite the critical nature of the transfer of power I understand the Tibetan politicians' apprehension. The role of the Kalon Tripa is incredibly new (first elected in 2001) and created in exile thus it has no power or influence inside Tibet. All three candidates are laymen who have spent no time living inside Tibet further adding to their obscurity. The Tibetan Government in Exile is not recognised by the international community and the Kalon Tripa title is only respected in the Tibetan community. The Dalai Lama in comparison harbours vast international respect, meeting with presidents, Prime Ministers, Kings and Queens. Arguably, His Holiness singlehandedly raised the Tibetan issue into the international spotlight and has successful kept it there for over half a century. In contrast, the Uyghur whose plight is equally as harrowing remain in relative obscurity due arguably because of the lack of a media attractive figurehead. For these exact reasons His Holiness the Dalai Lama's call to step down is not only wise, its necessary.

After the death of His Holiness, the entire Tibetan populous throughout the world will look to the Kalon Tripa for direction, however, with the nature of politics unlike religion, not everyone will agree with decisions made by the leader. It is evident that in terms of opinions politics, Tibetan are a split nation. A recent opinion poll stated that 23% say because of Kalon Tripa electoral process Tibetans are more divided now than ever before. The question that lingers in Tibetan offices, restaurants and monasteries in Dharamsala is do Tibetans need a

democracy in exile? With a people who have had change thrust upon them by Chinese invasion, the idea of change is understandably met with fierce trepitation. His Holiness the Dalai Lama has remained a strong and reliable constant throughout the changes offering support, this move has reawoken the fear in Tibetans across the world that stability is not ensured.

His Holiness he Dalai Lama's call to retire has opened up debate throughout the world as to the future of Tibet following the death of His Holiness. The future is uncertain but what is certain that Tibetan politics and religion despite their separation by the retirement, will never be the same again and without a authoritative leader to rely upon the Tibetan cause will never be as strong again.