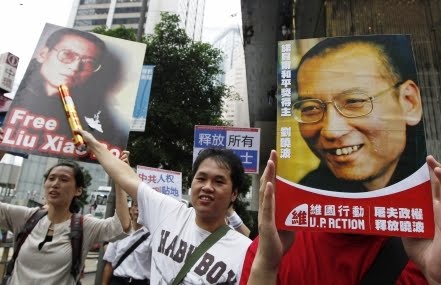 Dharamshala: Ever since the Chinese Communist Party's (CCP) victory in 1949 after years of civil war, the authoritarian one-party system imposed on a ‘united' China has met with public resistance, posing a threat to the ruling party's iron grip on power. China is currently facing a difficult time as it struggles with globalisation and opening up its society and economy to the world, while simultaneously trying to keep control of its large population of 1.3 billion people. Basically, it want to have its cake, and eat it too. To maintain power, the party has relied on the use of censorship and secrecy, and committed a great many human rights violations.

The nation now has the world's second largest economy, after the United States, having overtaken Japan earlier this year. Growth has been fuelled by the abundance of cheap labour and ability of the government to exert control over almost every aspect of development, though much of its enormous population still lives in poverty and all citizens within China still live without access to an objective and liberal education.

The costs of industrialisation and the economic ‘miracle', which has seen a recent boom in the country's manufacturing and export industries and caused unprecedented growth in the past few decades, have been great. There has never been a greater divide between the country's rich and poor, and inflation has risen to 4.9%.

According to the Chinese government there have been a staggering 90 000 'mass incidents' - of public unrest - every year since 2007, and official figures published last year show that the government has spent almost as much on maintaining internal order as on defence. Arrests are common on ambiguous charges such as ‘inciting subversion' or ‘traffic offence', and illegal house arrests of dissidents who have been released from prison are common.

Another issue threatening to fuel unrest is that of forced evictions by the government. Technically under Chinese law all land belongs to the state, making it legal for the government to evict people and sell their land and livelihood to developers for advantageous projects, often offering below-market price compensation and quite often neglecting to pay anything at all. Reports have surfaced of related violence leading to fatalities at the hands of authorities, and one activist has created a ‘Bloody Map' recently using Google maps, in order to illustrate the evictions across the country, forming one of the leading causes of instability in China today.

Perhaps globalisation's largest threat to the CCP's so-called ‘harmonious society' has been the spread of the internet in recent years to more than 400 million Chinese people, providing an ever-expanding source of information and communication against which the ruling party of China has waged a fierce censorship war, blocking many websites using the infamous ‘Great Firewall of China'. Material judged too ‘sensitive' is blocled, with particular attention to social networking sites (following recent organised uprisings in Tibet, Xinjiang and other areas) and foreign media. During times of particular sensitivity, such as the recent pro-democracy demonstrations in north Africa, the government blocks foreign news sources and uses the state-run Xinhua agency to distribute a version of events more suited to incite so called ‘social harmony' under one-party rule.

The theory that capitalist development inevitably leads to political democracy will soon be tested in China, where the ruling party still maintains that its Confucian culture is ‘traditionally authoritarian' and not suited to democratic reform. However as globalisation causes more information to seep into the country and capitalism gives rise to a new middle class, democratic change may just, with a little luck, be inevitable.
Refugees and Corruption in Southeast Asia: China and Nepal
The term ‘refugee' is generally used widely for victims of any situation of violence from which they are seeking to escape, for whom the significance of this label is greater than most people realise. Without it, they could be forced to return to a war-torn homeland or be put directly back in the hands of those they are fleeing. Refugees are displaced people, relying almost entirely on aid.

Since the Chinese invasion of Tibet in 1949 and crack down on Tibetan dissent ten years later, scores of people have fled the region and sought refuge in Nepal and India. These people are mostly poor and travel great distances in harsh conditions, moving on foot through the Himalayas and into Nepal, before often continuing their journey to India. They are received and processed at the Tibetan Refugee Reception Centre in Kathmandu. According to the United Nation High Commission for Refugees (UNHCR), there are currently 20 000 Tibetan refugees in Nepal, most of which are restricted in their movements due to legal and citizenship issues. The Tibetan refugee situation in Nepal is important, as it highlights several key regional issues regarding balances and shifts of regional power and corruption.

The central part of the issue and the aspect which poses the biggest problem for those who enter Nepal is their refugee status. Nepalese officials have in the past defended their actions in sending back many Tibetans by labelling them instead as illegal immigrants, and the distinction can be as vital as life and death for many, who allege that they face imprisonment and torture at the hands of the Chinese, who claim Tibet as their territory. Furthermore, many Tibetans have trouble finding employment due to a lack of refugee cards and official refugee status, though it is alleged that with the right amount of cash special arrangements can be made. Although refugee cards were issued prior to 1989 by the Home Ministry, the issuing of these cards has now become illegal and incoming refugees are now simply labelled ‘persons of concern' and encouraged to leave to India. This has been blamed on current political instability and lack of coordination with the UNHCR.

Nepal has recently been the recipient of an increase in economic and infrastructural assistance from neighbouring China, theoretically in exchange for enhanced cooperation between the two Asian nations. China, who strongly opposes any Nepalese governmental interaction with the Dalai Lama or exile communities in Dharamsala (India) and elsewhere, maintains that there are no Tibetan refugees, only illegal immigrants, and has been training Nepalese forces to deal with them ‘severely'. These events have been a cause for concern for many Nepalese, who believe China is beginning to exercise too much influence over Nepal, with sources also claiming Beijing has been putting pressure on its southern neighbour to step up patrols along their shared border ever since the Chinese government crushed uprisings within Tibet in 2008.

Recent witness reports have made allegations of Nepalese authorities handing refugees back to Chinese authorities, a claim they have denied despite evidence to the contrary. A diplomatic cable recently released by Wikileaks entitled ‘Update on Tibetan Refugee Flow' and sent by the US embassy in New Delhi estimated that 2500-3500 refugees arrive in the Tibetan exile community of Dharamsala in India each year, and that the "Chinese government rewards (Nepali forces) by providing financial incentives to officers who hand over Tibetans attempting to exit Tibet" on their way to India via Nepal. According to the Dharamsala reception centre for Tibetan refugees, 46 620 of the 87 096 refugees processed by the centre between 1980 and November 2009 have since returned to their homeland, with many who stayed being children seeking an education in their own language which they cannot get inside Tibet.

Nepal is not a signatory to the 1951 Convention or the 1967 Protocol on the Status of Refugees, and thus no laws exist there for the protection of asylum seekers or refugees, which means they must move on from Nepal into a third country such as India. With China offering poverty relief, investment in infrastructure and other forms of assistance, Nepal has been caught between treating Tibetan refugees in a humanitarian capacity and cooperating with China out of its own interests. It is an issue that has strained diplomatic relations in the region between the three nations.
Industrialisation and Economic Growth vs. Environmental Concerns
Rise and decline of the Japanese ‘economic miracle'?