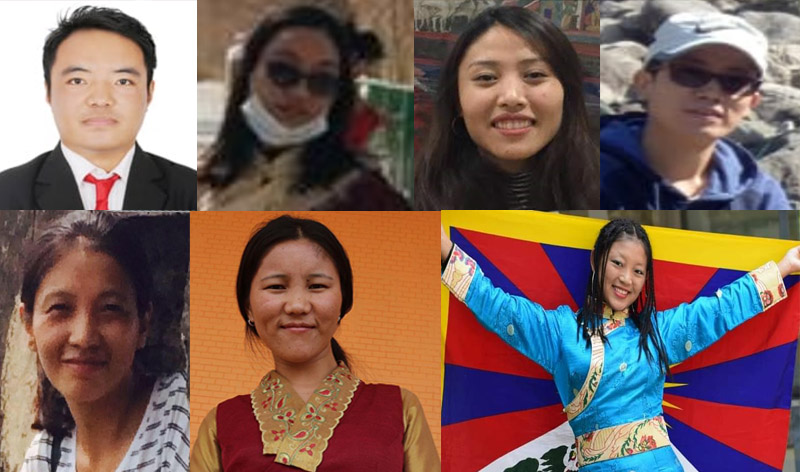 Dharamshala, India — Unlike previous elections, the preliminary candidates for 2021 Sikyong of Tibetan government in-Exile and Members of Tibetan parliament-in-exile are largely discussed in Tibetan communities, using social media platforms. Not to mention the eager, discrete, and interest that young Tibetans show in their soon-to-be-elected leaders. The voices of youths are signs of their concerns in the country’s political affairs and democratic process in-Exile.

TPI interviewed 21 Tibetan youths to share their aspirations, demands, and ideas for the upcoming elections for Sikyong and MP candidates of Tibet. They poured significant, relevant, and resounding thoughts based on the following two questions.

1. What kind of Sikyong you would want in 2021 for the Central Tibetan Administration (CTA)?

2. What qualities do you think should the 2021 members of the Tibetan Parliament-in-Exile (TPiE) possess?

Sikyong-The 2021 Sikyong should be an experienced and well-educated youngster, I think. A young Tibetan well versed in our traditional knowledge. Someone with clarity in vision and manifestos for our country in the future that also resonates with the modern mode of communication and innovation. A president who will be able to strengthen the unity of Tibetans and solve the regional conflicts. Someone who could provide an equal platform of performance for both Middle Way Approach advocates and complete independence fighters. It is also a unique characteristic of a democratic government having different ideals.

Keeping in mind the situation of Tibet, the internal unity in the Tibetan freedom quest is impartial. It will be more effective in bringing the Tibetan issue on international platforms. A leader who could make Tibet issue an international issue by bringing it on the international stage with a focus in direction of world politics. Whoever becomes the president, I think it should be someone who can revise the charters of the Middle Way Approach and bring dialogue with China.

Someone who will be able to keep constant touch with people both inside and outside Tibet while engaging in dialogue with the People’s Republic China (PRC). Like the Panchen Lama and Baba Phuntsok Wangyal’s time, the touch between China was maintained and we have to engage in dialogue. The biggest hope for Tibetans is to reunite in Tibet and the return of His Holiness the Dalai Lama to the homeland. A leader who tries to bring and work towards such changes needs to be elected.

MP- Be it president or members of the parliament in exile, it should be someone educated, experienced, and confident enough to organize activities that will bring focus on the Tibet issue. Otherwise treating the position as something whoever can take and go sort of thing just because it is a right given in the Tibetan constitution will affect negatively to the disciplines of the Tibetan government in exile.

For Chitue in 2021, I am hoping for many young activists since we are political refugees. The new parliamentarians should be very efficient in different languages and could speak sufficiently. People with the qualities of an activist and a leader who lead people and talk to China. We lost many opportunities without knowing the current political situation of the world therefore there is a need to revise the laws in our judiciary.

Members of the Parliament-in-exile Tibetan community should be well versed in terms of international laws and world politics and how they work. Paving a smooth relation between the public and the government, while attending to the public’s concerns are what Chitue should perform. Once they become members of the Tibetan parliament in exile, they should be public servants who could make sacrifices for Tibetan people, not a regionalist. Individuals who could work hard to bring to highlight the sacrifices made by the Tibetan brothers and sisters so far not just for a regional issue but for Tibet and Tibetans as a whole. Minimizing the small regional conflicts that exist in our community and work for the welfare of every Tibetan. Encouraging unity and brotherhood among Tibetans. The members should consist of elders, young and scholars.

Sikyong-The 2021 President should be well qualified in education and sensible in behavior. Someone not invested in religion and region. The new Sikyong should be able to compete and strive with other countries. The upcoming president of the Tibetan government in exile should be able to fulfill the wishes of Tibetans inside Tibet. Enabling progress in education and living conditions of the general public in Tibetan settlements in India.

MP - Properly adorned in education and behaviour. Their main concern should not be invested in religious and regional interests. Considering constitutional laws and regulation of Tibetan Parliament-in-exile above all. There is a great need to have a comprehensive grip on international as well as local laws.

Sikyong- There are many candidates for 2021 Sikyong with lots of experience in working for our Tibetan community. But being a country’s leader is a huge responsibility and people have high expectations for that person. A considerate Sikyong will also help in fulfilling one’s duty better and liberal in outlook. Since a Sikyong represents a whole nation, I think that candidate should be an affluent speaker in whatever language he\she is delivering. A Sikyong needs to have proper visions and manifestos which are practical in practice.

MP - There are a number of parliamentary candidates for 2021 who are young and politically active. Since many of them interact with the general public usually, they are very experienced in understanding what kind of real situations the general public are in. The very purpose of establishing our government in exile is not just to fight against China alone but also to improve the welfare of Tibetans and their perspectives.

We are living in the 21st century and we can’t have a backward outlook. Focusing mainly on politics while disregarding social welfare and thinking, it is not related to politics is wrong. A community faces many problems that are political, economic, and social in nature. If youngsters acquire more experiences, it will immensely help our society in politics as well. They should be socially and politically active. I personally would love to have members of the Tibetan parliament in exile more open-minded and would work for the sake of every Tibetan equally.

Having experienced and young parliamentarians in our government will also inflow new ideas and innovative measures which eventually help our own community. Looking back many of our elder members in parliament had been very conservative and focused so much on regional interest and conflicts. This will not benefit our community and our society will not develop if those above portray such examples.

Finally, to have well-qualified Sikyong and parliamentarians for 2021 in our community, it is the responsibility of every Tibetan especially those above 18 to go and vote. This is our right to vote for Tibet.

Sikyong-A Sikyong should be efficient in seizing international opportunities and in the protection of internal integration. A proficient thinker.

MP- who should be an activist for the Tibetan cause, who can voluntarily carry out activism by his/her own.

Sikong - A person who will give recognition to NGO activists and non-violent activists that could influence China. A person who can deal with new approaches for the Tibetan cause and new ways to reach our main goal. A person who can reach out to Tibetans and provide better job opportunities here in exile in order for the administration to last longer.

MP - People who are not just concerned about inside members only but find solutions for major issues of Tibet and focus more on political situations and activities. Upcoming MPs who are well qualified in being members of the Tibetan Parliament-in-Exile. Need both experience and abilities rather than just being arm-chaired parliamentarians holding the position.

Sikyong - Educated, sensible in behaviour, and other qualifications. A Sikyong should be able to boost relations with any society. Especially our Tibetan communities that should be a unified population and utilizing our energies for the same cause. Especially our rich culture accordant with which we need to form good relations with others. The election of Sikyong for me is very important. Especially, the current youngsters to have awareness and vote.

MP - The 2021 Tibetan parliamentarians are very important. MPs should not involve in conflicts of region, religion, and provinces. Well qualified in education and well equipped in behaviour. They should be deep thinkers. They are the nation's representatives and must be patriotic, selfless, and faithful in their duty towards their people.

Sikyong - Since we are political refugees, a Sikyong should have proficient modern education. Enough resolutions to brood and converse Tibet issues with China shoulder to shoulder on international platforms.

MP - parliamentarians are part of legislation and they need to work with the insight of both modern and traditional knowledge. Expert in strategy and tactics. Having such qualified Sikyong will benefit in the equality of Tibetans and the prevailing truth of our cause. We could walk hand in hand with other nations.