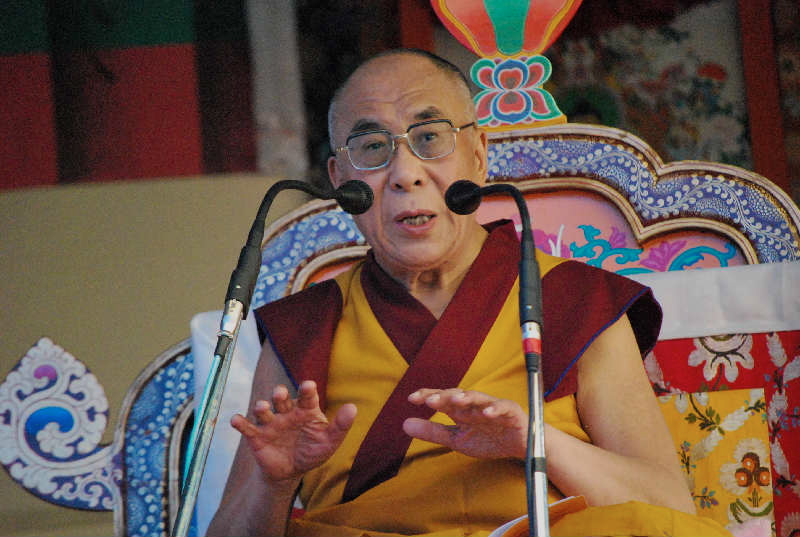 Tibetan spiritual leader His Holiness the 14th Dalai Lama (HH): I have nothing to say! Only I am very much happy, very much. Last few days [I have been] touring different places and met quite a number of people - very faithful, devoted. So I have opportunity to explain what is Buddhism. That I really feel is important. Number of people claim to be Buddhist but without knowing what is Buddhism.

Question: Your Holiness, what is your vision of the world in the next few years?

HH: Oh, that is good question...Until the mid-part of the 20th century, the concepts of 'my nation' and ‘other nation' were very strong...a clear demarcation between ‘we' and ‘they'. That's the basis of violence and war. Now, in the later part of the 20th century, with global economy and also environmental issue, the demarcation between ‘we' and ‘they' reduced.

This is one thing. Second thing is that people everywhere are really fed up with violence. Of course, hateful people always exist and in the future will always remain but, [regarding the] whole picture, judging by changes and development of a more civilized way of thinking, there are big differences between the early part and the later part of the 20th century.

For example, some of my friends - top, respected, well-known scientists - they consider my explanation about Buddha dharma as a science, not a religion. So science and spirituality become closer and closer. Now this is 21st century. Of course, there are some unhappy events here and there, but the future is the continuation of the later part of the 20th century. So therefore, I believe that the 21st century will certainly be a more peaceful century. There's no doubt.

Question: And India will play a very major role in this?

HH: No question! In the 70 years since this country has got indepencence, compare living state. Despite millions of Indians still not [being] very educated, democracy is deeply rooted in this country. And, moreover, I consider myself as a messenger of India. Two factors. Number one: a thousand years in this country Ahimsa (the avoidance of violence). Is not newly invented - last 1,000 years, 2,000 years, 3,000 years. That is still an important Indian concept - Ahimsa.

Second - religious harmony. Today, I think all major world religions exist in this country. In ancient times, I think more than 1,000 years ago, besides home-grown religion - Hinduism, Jainism, Buddhism and, later, Sikhism - came from outside Zoroastrianism from Iran (Parsi), then Christianity, then Islam, and Judaism in Cochin area and Kerala. So whole major religious traditions live together in this country.

Of course, in the philosophical field, there are some arguments, disagreements. For example, in Hinduism and Buddhism. However, basically, they are like twin brothers, sisters. The religious harmony is part of India's tradition. Wherever I go, I always carry the message of Ahimsa and the message of religious harmony. So these two things are very much relevant today.

The Shiite-Sunni conflict and Catholic-Protestant conflict - when I see these kind of things, then I think India's real tradition [of] religious harmony is very much needed today. So India can take important role. Now, I want to tell you, my Indian friends, you need more effort - hard working! Like the Commonwealth Games - it indicates we are not always so efficient!

Question: Your Holiness, on your Twitter site you have recently said that your middle-way policy has been somewhat criticised by your own community, especially by the Tibetan Youth Congress. So what do you see in the future, after you? Do you see the Tibetans denouncing the middle-way path?

HH: Good question. I'm often telling people - the Buddhist community - not only Tibetan but also Chinese, Japanese, Korean - all Buddhist brothers and sisters - that now we should be 21st century Buddhists. That means use all the...modern facilities and be a modern person - full of knowledge about modern science [but] in the meantime preserve our own traditional religion - Buddhism.

A number of scientists, including medical scientists, are seeking methods to prevent illness and recover more quickly, and to make better concentration. They are seeking for some Buddhist methods. They are not Buddhists but they recognize Buddhism...as a science of the mind. As I mentioned before, if Buddhists carry Buddhism as a ritual or some kind of ceremony, it won't remain and the superstition...will not remain.

But if you know what is Buddhism - it's utilising our human intelligence in the maximum way and transformation our emotions. There are two kinds of emotion. One category of emotions is spontaneous, without reason - like anger, hatred...fear, attachment, pride. Then another emotion - genuine compassion, genuine altruism. These emotions do not spontaneously come, but through training, through reasoning.

So in order to develop a calmer mind, these positive emotions are a very important factor - not thinking about next life or Buddhahood [but] simply in order to become a happier person, and happier family, happier community, happier humanity. I think this training of mind, which comes from Hinduism and Buddhism...is very relevant today.

If the people - for example, Ladakhis - just practice without knowing what is Buddhism, then it goes away. I noticed in the early '60s, in Ladakh, those modern educated people's attitude towards the monasteries was quite critical. Now, it has changed, because I've asked them to study Buddhism. You must have full knowledge about Buddha dharma. So now these educated people, including government officials, whenever they find the time, organize...the class for Buddhist studies.

So...for the last 40 years, at least 5,000 to 6,000 monk students come from Ladakh to Arunachal. They carry out studies in our monastic institutions. These people who study thoroughly for 15 or 20 years, when they return to their own monastery - much improved. In the '60s...a lot of monks often drunk! Now that's gone. Discipline improved, knowledge improved. As a result, respect from educated people has now developed - sufficient.

Therefore, modernisation, globalisation, is necessary. Nobody can escape and in fact it is very useful. Because of modern technology, within one week I had the opportunity to visit this large area. Without modern technology, we would have used mules or horses! That's terrible! So I don't think the material development and genuine spiritual development can't go together. No problem.

Question: Can Buddhism help fix the problem of loss of altruism in the social community?

HH: Like any other major religion, Buddhism has the same sort of advice - practice of love, compassion, altruism. Then differences: Buddhists, in order to promote these things, use our intelligence. So those scientist non-believers like [the] Buddhist approach. They find it difficult to believe [in a] creator...According to Buddhism, oneself is the creator.

I think all major religions can make an effective, significant contribution for a better world, if we sincerely practice. Like Christian brothers and sisters - they say the true teachings of Jesus Christ, if implemented in daily life, are very helpful to bring inner peace, harmony in the family, in the society. Islam also. Sometimes we get a different impression, but actually those Islam practitioners who genuinely practice, they extend love to all creatures. Same like Buddhists.

The problem is, like in many other fields - economy, business, politics - the religious field also carries some hypocrisy - saying nice things but not being concerned with real life. That's the problem. So that's why religion itself sometimes becomes instrument for additional problems for society. Not properly follow religion - just use the name of religion for one's own interest.

Question: Yesterday, our Foreign Minister Krishna said you are an esteemed guest of India but you should refrain from making any political statements, and that Tibet is an integral part of China. Do you think this is a statement of a helpless friend or is India going for a double standing?

HH: No, no, no. In 1951, we developed direct contact with Chinese government. Meantime we also appealed to the United Nations. Then India suggested that, since direct talks with China have continued since 1951, it is not necessary to raise the issue at the UN. Then in 1954, the agreement between the Chinese government and the Indian government clearly mentioned Tibet as an autonomous region. Since then, continuous - same, same. But Indian government supports.