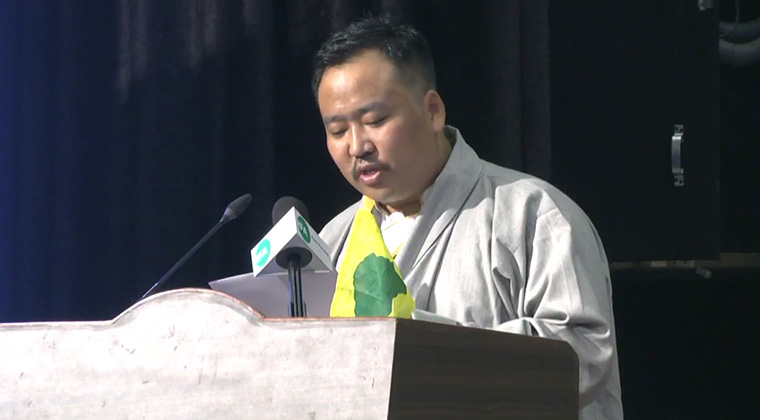 Dharamshala, India — An exclusive interview with Gonpo Dhondup, the president of Tibetan Youth Congress (TYC). He shares with Tibet Post International(TPI) the working structures of TYC and its contributions in Tibetan freedom movement. He also talks about the Wuhan virus and how the irresponsibility from China’s side had caused the whole world a huge and pricey inconvenience.

TYC is the largest non-governmental Organisation of Tibetans in exile-communities. Boasting over 38,000 members in India and abroad, the TYC has been one of the pillars of Tibetan society since its inception in 1970.

TPI: Could you please introduce yourself and talk about your work in the organisation?

Interviewee: My name is Gonpo Dhondhup and I am the current President of Tibetan Youth Congress.

TPI: What are the goals and contributions of TYC to Tibetan freedom movement?

Gonpo: The Tibetan Youth Congress is the largest non-governmental organisation in the exile- Tibetan community. We have 88 chapters and over 38,000 members around the world. So, for the past 50 years, we have been actively contributing to the Tibetan Freedom Movement. The organisation was founded in 1970 and we celebrated the 50th Founding Anniversary of TYC in 2020. So far, we have made contributions in terms of political activity by organising grassroots political campaigns, protest campaigns, peace marches, hunger strikes. We have also been involved in political lobbying and many other activities to advocate and highlight the issues of the Tibetan people in India and throughout the world.

In terms of social service, the TYC is very active across all segments of social groups, particularly to those in need of help. The Tibetan Youth Congress is the first organisation to extend a hand in support of our Tibetan communities whenever and wherever it is needed. We also volunteer our services during the Kalachakra Empowerment, which attract massive crowds from all over the world. The TYC organises a variety of services including, but not limited to, a public announcement system, first aid centres and security and organising the event. The TYC is also influential in training and providing political and social leadership for the Tibetan society. A lot of members of Central Tibetan Administration (CTA) had served as members of the Tibetan Youth Congress in some capacity, either as leaders of regional chapters or as members of the central executive committee. Leaders like the current president, Dr Lobsang Sangay and the current Chief Justice, Sonam Norbu Dagpo had all been associated with TYC previously. Finally, the Tibetan Youth Congress is actively working to promote and preserve the Tibetan culture, language and tradition. We organise special sessions about Buddhist culture and Tibetan lifestyle as well.

TPI: About your campaign #MakeChinaAccountable2020 that you launched in June of this year 2020, how do you feel about the impact it made?

Gonpo: It was primarily a digital campaign, as opposed to a variety of on-ground campaigns that we organise, but due to this Chinese virus or Coronavirus, we saw the whole world go through a lockdown to curb the spread of the pandemic. That is why we initiated a digital campaign by the name of #MakeChinaAccountable2020 in the month of June. We had initially planned the campaign to be some 10 days long, and had estimated a reach of nearly 1,00,000, through likes, shares and promotion across various social media platforms. The responses we received however, was beyond all expectations and our movement had reached over 1,70,000. We received tremendous support for the campaign not only in India, but also from abroad. There is immense hatred for the Communist government in China among the people and we tried to provide a digital platform for people to publicly speak out their grievances.

TPI: If you had to pick out one highlight for the year, what would it be?

Gonpo: As I mentioned earlier, we are celebrating our 50th Founding Anniversary this year, and we plan to have an entire year of celebration for our Golden Jubilee. I would say that is the highlight of the year.

TPI: With the celebration of TYC’s 50th Anniversary this year. What would you say about your journey as an organisation so far?

TPI: What are your objectives and expectations from the new year of 2021?

Gonpo: In this new year, the first aim is to end the pandemic with all its deaths and destruction and to hold China accountable. Secondly, we would like greater support from the global community. Year 2020 helped us see through China’s lies. For the last six decades, our movement has been about ‘China Lies, Tibetans Die’. This year however, the movement evolved into ‘China Lies, World’s People Die’, mainly due to China’s negligence when reporting the spread of the disease in early stages. This is why we need more support from the global masses to make China accountable for all the deaths and miseries the Communist government of China has caused throughout the world.

TPI: In what has been a difficult year for everyone, how would you say your organisation has grown in 2020? Did it live up to your expectations?

Gonpo: This year, everyone suffered at the hands of the pandemic. Be it politically, economically, socially and in other ways as well. This has caused the Tibetan issue to gain the limelight in many more countries, and therefore has helped our organisation get more support in the international community. In the 1970s and 1980s, people considered China a means to benefit economically, because of its low costs of production, etc. The pandemic has helped the global community to realise that the CCP government is not as trustworthy as they originally believed and has massively helped our Tibetan Freedom Movement. So overall, the pandemic has been a boon for the Tibetan Freedom Movement.

TPI: Any message for the general public or any particular group?

Gonpo: My message to the general public and the global community at large is that it is high time we make China accountable for all its mistakes. Firstly, we must boycott Chinese goods and services. Secondly, we must isolate China politically as well as economically till it steps up and accepts responsibility for all the deaths and destruction it has caused in the entire world. This year we learnt to social distance from one another because of this pandemic, now we must hold the Chinese government distant in political, economic and cultural areas and isolate them from the global community.