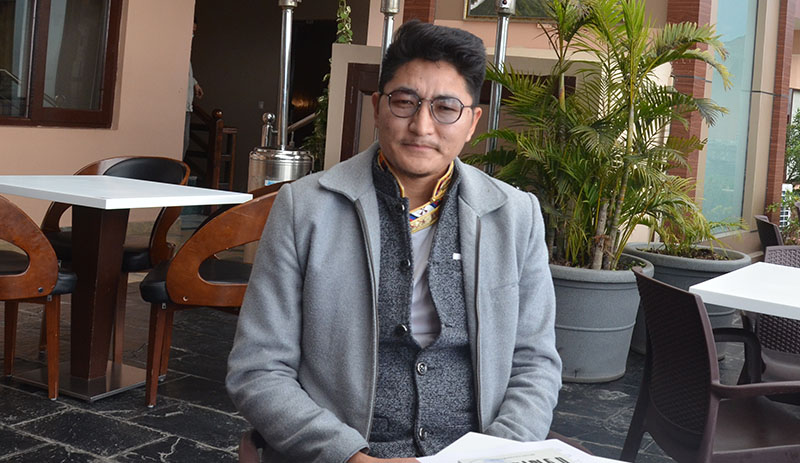 An exclusive interview with Sonam Tsering, general secretary of Tibetan Youth Congress (TYC). He shares his experiences of escaping towards India as a young child. His hopes of returning and longing for home in Tibet. He portrays his ideas and feelings of home, life in exile, the struggling Tibet cause and many more themes through numerous poems and writings on his blog 'silent songs of sonsnow'. He also talks about what it feels like to live in a free country as an unfree man.

TPI: Can you introduce yourself and what you do currently?

Interviewee: My name is Sonam Tsering, I was born in Tibet and brought up in India where I studied under the great guidance of His Holiness the 14th Dalai Lama. I escaped from Tibet in 2003, walking day and night for thirty days. I was too small to know what it meant and that I would not see my parents again for so many years. I completed my MA in Public Policy from O.P. Jindal Global University and currently serving as the General Secretary of the Tibetan Youth Congress, the largest Tibetan NGO.

TPI: What caused you to leave Tibet and come into exile?

Sonam Tsering: I was too small to understand why I have to leave behind my parents, but later I realized that my parents wanted me to be educated under the guidance of His Holiness the 14th Dalai Lama of Tibet.

TPI: How did you manage to escape to India and what are the difficulties you faced on the way (Shigatse or Indo-Tibet border)?

Sonam Tsering: The first and foremost challenge is that, a stranger was introduced and told me that he would take care of me and my cousin brother throughout the journey. Then we started our journey and it took almost thirty days to get to India. We bore every hardship that we had faced on our way and finally were able to get to India. We slept under the sun when we thought of the galvanized gun of the Chinese. We step out like an owl at night when the enemies are not in our sight. When we think of far behind bars we crept and crawled like victims of war. We escaped through the crest of hills and the chill winter wind. We crossed the rivers in its coldest stage and managed to cross the border by leaving behind the boundaries of the Great Wall. Our foods were finished in the last minute of our arrival at border areas and had to bang the doors and beg for bread to save our last breath. We exchanged our clothing for food and managed to reach Nepal after crossing countless mountains and rivers. I could only think of a film when I look back at those escaping experiences.

TPI: What is the most dangerous, life-threatening challenge you faced on the way?

Sonam Tsering: We were almost caught by the Chinese police on one fine evening. A shepherd boy must have informed the police of our whereabouts. Our elders felt suspicious of the situation and told us to pack our bags immediately and abandoned the place where we were supposed to stay that night. When we were at the neck of the hill, we saw police vans marching towards the spot. One of our girl companions was missing that evening and didn’t find her back, although our elders searched everywhere. Much later I heard that she returned safely back home without the Chinese police knowing about her intended escape to India.

TPI: Do you enjoy freedom in India and what is the most challenging situation for you in an unknown land?

Sonam Tsering:  Yes, I am making the best use of the freedom I was bestowed, but still I am trying to find the freedom of returning to a free country. I am an unfree man in a free country. The saddest and most challenging situation in a free country is that there is nothing around you that you own and even the heart deep down under my chest chooses to run away every now then towards the homeland.

TPI: Any message for the public?

Sonam Tsering: Each of us has a responsibility of being a voice for voiceless and voiceless Tibetans buried behind the boundaries of high standing Himalayas. Because of which I feel that I have more time for the cause of my country than for myself. I believe that each of us is capable enough to contribute something to somewhere in this most difficult time of struggle for our common cause. I know that it is high time for us to put our potentials into performance and visions into action so as to see our snowy mountains before they melt out of mining and marketing.

Therefore, I wish all my countrymen to act more like an activist who calls and campaigns against the agony of the enemy by raising the fist of freedom higher than their heads. My heart pains in great depth seeing them acting more like professional politicians, politicizing every small thing while sitting silently on bigger issues and seeking safe space and soft sits. I wish them all to stand together and speak in solidarity with the ones who fight for our common cause.