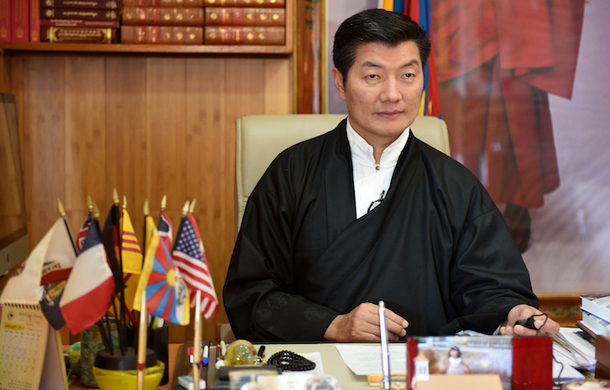 Dharamshala, India — The authoritarian communist regime in China will claim ownership of all, except for Wuhan-originated COVID-19 pandemic, Tibetan President said in this week, in response to questions raised by India Today about the current Indo-China border conflict, P. Stobdan’s remarks and the support for Tibet Policy Act in the Senate.

The President of Central Tibetan Administration previously known the Government of Tibet, Dr Lobsang Sangay was invited at India Today to speak on a range of issues from the India-China border conflict at Ladakh, the incendiary statements from former Indian diplomat P. Stobdan and the support for the passage of the Tibet policy act bill in the Senate.

In the 20-minute long interview with host Geeta Mohan, Tibetan President reasserted his stance on the border conflict, stating that throughout the thousand years of shared Indo-Tibet border no conflict had arisen, and ever since the occupation of Tibet, India has had to spend billions to secure its borders, pointing out that the core issue here is Tibet, according to the CTA official media.

To ensure permanent peace between China and India-the world’s two largest populated nations, Tibet has to be demilitarized and made a zone of peace as proposed by His Holiness the Dalai Lama, he stated. The McMohan line which is India’s preferred border with China was signed by the then Tibetan Prime Minister which China does not deny, needs to be recognised by India, Sikyong noted.

On the question of the territorial definition of Tibet, Sikyong explained that the Tibet Autonomous Region as defined by China constitutes only central Tibet and not the Kham and Amdo provinces from which His Holiness, Sikyong himself and many Tibetans originate.

In reference to the bill introduced by US Representative Scott Perry recognising Tibetan Autonomous Region as a separate nation, he clarified that a mixup had occurred concerning the territorial definition of Tibet which has been notified to the Representatives and would be amended at the markup.

In response to P. Stobdan’s statements about His Holiness the Dalai Lama, Sikyong expressed his disappointment with the former diplomat’s undignified manner and irresponsible nature of the remarks, adding that the people of Ladakh have a strong bond with His Holiness who visits the state frequently as India’s guest and furthermore, conducted the sacred Buddhist Kalachakra teachings on three occasions. He dismissed the former diplomat’s remarks as a marginal view and not shared by the majority of Ladakh’s people.

Sikyong was asked for his views on China’s affronts amidst the Wuhan-originated pandemic crisis, towards India, Taiwan, Hong Kong, and the US. He responded, that the world has a trust deficit with China and are calling for investigations into the origins of the pandemic, information which China had suppressed until the situation was beyond salvageable, unleashing inconceivable suffering and havoc on both man and the economy.

Tibetans have been telling the world for years about China’s deceptive tactics and expansionist ambitions since its violent occupation in 1959 and continued oppression to this day. He quipped China will claim territorial ownership of Tibet, Taiwan, Hong Kong, and Xinjiang, with the exception of the origin of the COVID-19 outbreak in China.

He explained that the passage of the Tibet Policy Act comprehensively lists the US policy towards Tibet in terms of history, environment, spiritual matters like the reincarnation subject and acknowledges the Tibetan administration in exile as a democratic setup, including funding provisions for Tibetans in India, Nepal, and Bhutan.

Concerning the human rights’ violations, the US will not allow China to open a new consulate there until the US is allowed to establish one in the capital city of Lhasa in Tibet. The bill is expected to pass in the Senate, after which it will reach the President’s desk who signs it into law, Sikyong expressed optimism in that regard.