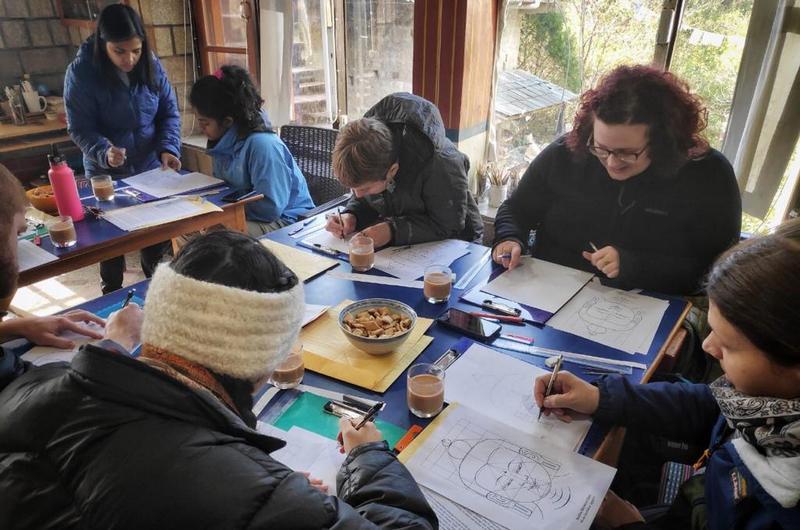 A group of students from the University of Denver in Colorado, U.S.A., was recently on a two week trip to Dharamshala, India. Photo: TPI/Zach Chrisman

Dharamshala, India — A group of 13 students from the University of Denver (DU) in Colorado, USA visited Dharamshala for two weeks in December 2019. The trip was part of a winter break interterm course lead by two Religious Studies professors.

The students heard from Tibetan government institutions and local activists in the mornings and volunteered at Tibetan NGOs in the afternoons. Throughout the trip, they had the opportunity to experience both important events and the everyday culture and environment of Dharamshala.

His biggest impression of Dharamshala was the resilience and kind gestures that the Tibetan community in exile extended to the student group. As he worked with the Tibet World staff and the participants in their programs, he took in part many conversations with Tibetans who were forcefully displaced from their homeland. He took special notice of the enthusiasm and camaraderie amongst the staff and others he encountered.

He and other students were glad to participate in ceremonies and natural wonders around Dharamshala. The student group witnessed the 30th-anniversary celebration of the conferment of the Nobel Peace Prize to His Holiness the 14th Dalai Lama. The colorful dances, official speeches, and temple grounds were all inspiring sights to behold.

Hanna is a master’s student in International Studies who volunteered with the Tibetan Center for Human Rights and Democracy (TCHRD). This institute provides data about the state of human rights in the Tibet Autonomous Region and promotes the democratic rights of the Tibetan people.

She helped create an informational pamphlet displaying the achievements of TCHRD. She also worked on an annual report detailing China’s repressive actions against Tibetans in Tibet. The survey is based on international laws with which China agreed to cooperate. Particularly, she observed how China has blocked freedom of speech and cultural education in Tibet.

What impacted her the most from this work was how enormous the oppression of the Tibetan people in Tibet is and how little information is being spread about it. “China is systemically denigrating the Tibetan culture,” she asserted. For instance, she noted how the Chinese government is replacing local Tibetan instructors with Chinese teachers and the Tibetan language isn't allowed to be spoken in schools.

She was astounded at how aggressively China is erasing the Tibetan culture even though Tibetans pose no threat to them at all. Even activists who just barely reacted to these policies ended up imprisoned. To her, the idea that China has turned the Himalayan peaks into open prison bars is incredible and preposterous.

Asiya is another undergraduate student who also served at TCHRD. She described her overall experience of Dharamshala as “eye-opening.” Beforehand, she was unaware of how huge international powers like China “play a role in determining the future of the world and of other peoples and minority groups.” She was glad to see the Tibetan people and allied countries organizing to stand against these powers.

Throughout the trip, she noticed similarities between Tibetans’ struggle in exile and the experiences of the African-American community. She recognized how the Tibetans have likewise been forcefully uprooted from their homeland and represent a minority diaspora community. She appreciated the Tibetan systems of healing that she observed. She noted that the community appeared hopeful, and she enjoyed seeing how religion played a significant role in many individuals’ lives. To her, Buddhism seemed to be a healing force and a guide for orienting life in exile.

She also esteemed the governing bodies and official assemblies such as the Central Tibet Administration which the Tibetan community has established. Other scattered cultures, she noted, have not always reached the point of creating these structures. She found that these Tibetan institutions are powerful forces that help keep their culture alive.

During her volunteer placement at TCHRD, she particularly remarked how the Chinese government broke international laws without remorse or consequence. This observation has led her to believe that “human rights seems to be a universal understanding, but it’s actually not practiced as universal.”

This has led her to think about how power influences the beliefs and morals of those in seats of authority. She is also asking herself what the point of international law is in the first place if it is not followed when agreed upon or enforced when it is broken.

Asiya and others understood that they were experiencing “history in the making” during their stay in Dharamshala. All of them were honored to contribute to part of that history through their volunteer assignments in local schools, NGOs, media outlets, and traditional art centers.

For me personally, this course has been an incredible treasure in so many areas. Living in the Himalayan area has been breathtaking. The snow-laced foothills and brilliant towering peaks are an absolute wonder to wake up to every morning. The branching evergreen trees, the kites swooping by our balconies, the ocean of clouds covering the Kangra valley and the distant hills breaching through this morning mist like whales are not common spectacles even for us Coloradans.

My favorite event was Thubten Samphel’s book launch at The Other Place gallery. The discussion between this experienced recorder of Tibetan stories and the many young Tibetans gathered there was so moving to hear. Samphel’s concerns about China’s actions illustrated the challenging nature of the future of the Tibetan issue. Still, the young audience’s sharp, critical insights about the current political situation was enough to stir hope in me as a foreign attendee. Because of this, it was hard not to have positive aspirations for the strength of the Tibetan cause and flourishing of the Tibetan identity.

This has further been an invigorating and purposeful encounter. As I hear the stories of our friends, neighbors, and community organizers, as I learn about the importance of Tibet’s position and China’s ongoing cruelties, and as the Himalayan breeze stirs my heart like the prayer flags strung about Dharamshala, I feel more and more solidarity with Tibet. After being here, I cannot help but advocate to my friends and family back home when I describe my experiences here. I am thankful for the opportunity to become a friend to Tibetans and to the Tibetan cause.

The students will continue on through north India to Amritsar, Delhi, and Agra to complete their educational trip before heading back to the United States. Time spent here will certainly linger long in every heart, hearts now and forever full of compassion for the Tibetan people.