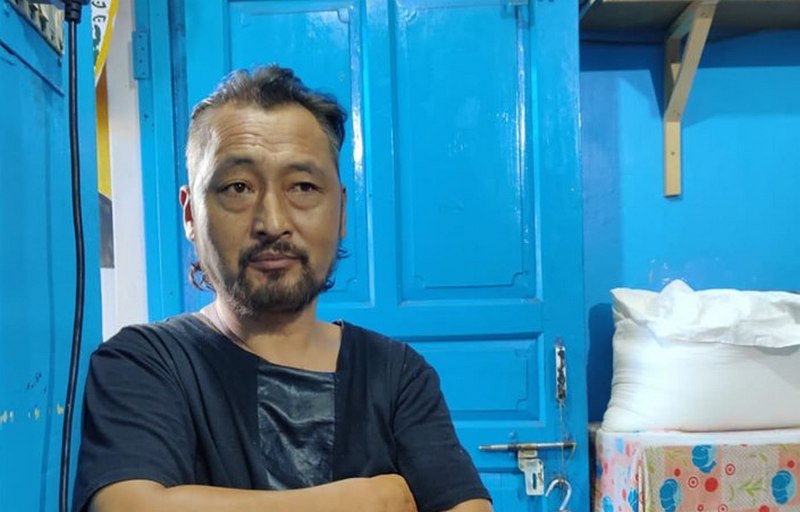 Dharamshala, India — Anisha Joneja from the Tibet Post International conducted an interview with Tenzin Chondup a child of Tibetan refugees, now owner of Rewa Café in McLeodganj. The 44 year-old veteran of the Special Frontier Force of the Indian Army shared his own personal stories and why it is important to maintain a humble life in-Exile.

When did you come to Dharamshala?

I was born in Arunachal Pradesh, my parents got separated and that’s why I came here with my mother in 1981. I studied in a boarding school, a branch of the TCV School near Manali, till class 9 after which I joined the Indian Army. My parents hail from the Kham province in Tibet.

How did your family get by when you arrived in Dharamshala from Arunachal Pradesh?

I was very young then, and quite soon after I arrived I joined the boarding school near Manali. Since there were a lot of Tibetans here then doing odd jobs requiring physical activity, in the evenings, after work they needed some tradition Tibetan barley beer or chhang. My mother brewed and sold chhang to these people and even other local Indians, the Gaddi community who are natives of this area. My stepfather was a carpenter who worked on the furniture and interiors of His Holiness’ Tsuglagkhang Temple here. He was one of the few people then who had a solid knowledge of the trade, and he took a lot of people from the local Gaddi community under his wing and taught them. That’s why I have a very good rapport with the locals here because I knew their fathers who worked with my stepfather.

Since when have you been running this café?

I have been running this place since 2005. I retired from the forces in 2003. Back then, the café culture was still new here, people didn’t know much about it. Back then we had a lot of Tibetans living here, that number has gone down now, as may have moved abroad and some have returned to Tibet. What I like about my venture is that I have never had to depend entirely on tourists; we have strong links within our community here and with local Indian people as well so I get a lot of Tibetan and Indian customers alike.

How did you get recruited into the SFF?

The division of the forces I was in, the Special Frontier Force had been instituted by Pandit Nehru after the ’62 India-China War, with intent to perform covert operations behind Chinese lines. The Indian Army suffered huge losses because of high altitude. Wartime recruits from the plains say from Bihar or Punjab had trouble dealing with the low temperature and altitude sickness, thus China had an advantage there.

In ’1962, our community had just arrived from Tibet; we were newcomers in this country. Young men from the community, who had been employed in odd jobs such as construction in places like Spiti Valley owing to their resistance to high altitude and cold temperatures, got recruited into the SFF. The promise of facing the Chinese who had driven us to put of our country was lucrative to many. Many young monks also joined. However, there was no significant military confrontation with China after that.

However, in ’1971, Indira Gandhi put the SFF to use against Pakistan in the ’71 war. The division had been well trained by people from the CIA in guerrilla warfare and proved to be massively successful against Pakistan then along with the Mukti Bahini forces. I heard stories from my seniors about that war. It is said that after a few initial failures of the other divisions the army had sent in, our division was deployed, and the results immediately improved. The Pakistani POWs from that time said that we weren’t even visible to them in the night when we attacked. I believe that’s because of the amulets we wear; they are sacred and meant to protect us from harm, like the Gorkha regiment has their ‘khukri’. I got recruited straight from school and felt honoured to be a part of the force.

Where and how did you receive training? How was it?

I was trained in Chakrata, the home of our regiment. I underwent three months of guerrilla warfare training, three months of army training, and three months of outstation training comprising of rock climbing, para-jumps, swimming etc. It was very strenuous, when we were in training we didn’t know how much we weighed, it was like our body went numb after enduring all those hours of physical activity.

What key operations did you participate in as a part of the SFF?

I was in Operation Meghdoot, Operation Vijay and a host of other operations in Assam.

Did you get any allowance while in service? What benefits did you get after you retired?

We had a meagre allowance of 300 rupees in ’1998. But what troubles me more is that soldiers who retired before January 2009 haven’t received any pension. And that too was only given because another Nepali division with us filed a case. They could do that because they have a country of their own, we don’t. If we go and protest in Jantar Mantar, nobody will listen to us. Also, the only people who receive this are people who have completed their 20 years of service in full.

Anybody who retires due to medical reasons does not get anything. Like me, I joined the SFF at the age of 17. I suffered a bout of tuberculosis, which is why I could not progress to a higher category owing to lung defects and had to retire early to be with my family and support them by other means. I did not get a single rupee in pension. I have a canteen card but that doesn’t account for much. There is a case still in the courts. The country is mostly concerned with OROP, but problems like ours rarely get any attention, if at all. I am content that I can feed myself and my family by myself.

But the ones I am concerned about are my seniors who served in the ’71 war. Many of them are 75-80 years old now. Many of them are monks who have no family to take care of them; they deserve something for their service to help them in their old age. They have contributed so much to the Indian Army in its nascent stages after Indian Independence. The young generation doesn’t know about their heroic deeds. I don’t think it should take a court case to give them the credit they are due.

Can you tell us more about your involvement in Operation Vijay?

I cannot tell you much about how we operated because of obvious reasons of security. But I can tell you that things turned out would have been very different had we not been there. Fighting on Tiger Hill is not an easy thing to do. But like I said, I cannot share much about it.

How do you feel about China’ occupation of Tibet in 2019?

It is absolutely wrong and illegal. I have unshakable faith in His Holiness the Dalai Lama, till he’s around, I think we will be okay, we still have a chance to return to our country. I don’t see anything happen to him in my lifetime. But I worry about my children and the younger generation. I don’t expect anything from the NGOs and other organizations.

We talk about Rangzen and Umaylam sitting here but China is unwilling to talk to us or discuss anything diplomatically. Had they said that Rangzen is not possible but we will talk about Umaylam, we still would have felt hopeful, but there is no response from their side. They continue to oppress and torture our people in Tibet. But I know for a fact that the spirit of the Tibetan people is not weak, we still feel as strongly about Chinese occupation as we felt when we first had to come to India more than 60 years ago.

We should continue to foster this spirit of resistance and opposition to the Chinese. We do demonstrations and marches on the anniversary of the 1959 Uprising Day every year, people give speeches, articulate our demands. The next year we do the same thing again. We don’t hear about any new developments. We should ask what progress is being made. We should make sure people listen to us and put pressure on the Chinese.

What do you think is the role of the Indian Government in all of this?

We owe a great debt of gratitude to the Indian Government. They let us live here, free from any oppression, free to articulate our demands for genuine autonomy in Tibet. You can’t do this in Nepal or Bhutan, even though there are Tibetan settlements there. There are countries where you can’t wear t-shirts to show support and solidarity with the Tibetan cause. I read that this year Nepal banned the public celebration of His Holiness’ Birthday. But we could celebrate it with no interference or restriction here. Because of what happened to us, we know the value of this freedom.

Tell us about your life now and your family.

I was posted at various locations in Northern India when I served in the forces, but one of my last postings was in Arunachal Pradesh as a part of the Signal platoon. I was in charge of the wireless telephone and sending and receiving messages in Morse code. I met my wife there and we got married. Our children were born there and we moved here soon after my retirement in 2003. I have three children, one son, and two daughters. My son is studying in South India, while my daughters are here. We live a simple life off what we earn from the café and I am content as long as I can put my children through school while imbibing in them our Tibetan culture and the importance of our struggle.

I consider my time in the Army as an integral part of my life. Whatever I am today is because of what I learned from my time in the service. I have no shame of doing any kind of job for my society or any petty material concerns. I worked in the army kitchens for a while. I enjoyed cooking for my brothers and learned a lot there as well. That’s where I got the confidence that helped me open a café here and serve good food to my customers.