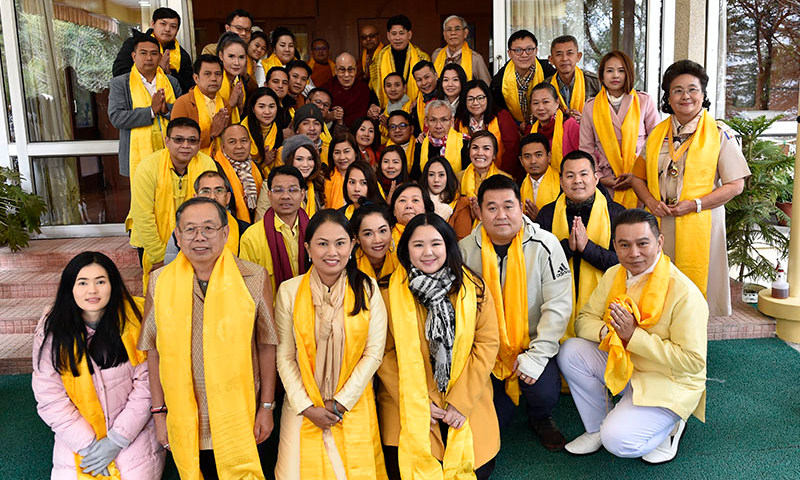 A group of 50 devotees from Thailand led by Dr Aphinita Chaichana visited His Holiness the 14th Dalai Lama at his private residence in Dharamshala, HP, India, on March 4, 2019. Photo: TPI

Dharamshala, India — Spiritual leader of Tibet, His Holiness the Dalai Lama met with a group of Buddhist devotees from Thailand and asked Thai and Tibetan Buddhists should stand up all united in order to promote world peace.

During the meeting, the Nobel Peace Laureate told them that all Buddhists should be united in order to promote world peace. ”We have to follow the Buddha’s teachings and We are all the same as human beings, we all want to lead a happy life to support and love each other,” His Holiness told the group.

Dr Chaichana shared with the Tibet Post International (TPI) how she felt visiting the spiritual leader of Tibet in Dharamshala. She responded by saying, “we came here to visit our most respected His Holiness the Dalai Lama, as he is the icon of world peace. When we meet the Dalai Lama, we feel very peaceful and happy, so many people wanted to meet him, but not everyone can meet him, we had really good fortunate this time.”

This time, our delegation is comprised of 50 important people from Thailand- mostly government officials and community leaders as well as people from Thai educational society. Today, we feel very happy to have the special audience with His Holiness the Dalai Lama. His Holiness blessed us and offered Buddha statues to all our delegates and we found that His Holiness feels very close to us and he is very peaceful.

Dr Chaichana said that His Holiness told them that they should follow teachings of the Buddha to promote world peace, while respecting all the world's major religions.

The Buddhist leader also talked about his pilgrimages to Thailand and his meeting with the leaders of the country. Explaining Thailand and Tibet shared a special relationship that connecting the two people; His Holiness suggested a Thai and Tibetan student exchange for study the teachings of Buddha and Tibetan and Thai culture. He expressed his hope that our group will support this program. We told him that we are ready to be part of this program. “He is very outstanding champion of the world peace and he is the best one we can trust.”

The Supreme Patriarch was a friend of His Holiness Dalai Lama of Tibet, who called the Thai monk "my elder brother." His Holiness paid several visits to Thailand since his first state visit in 1967, and each time he would visit the temple where the Supreme Patriarch resided to have a discussion. “I am deeply honored to meet His Holiness and I have great respect for him, he never has time to himself and he is always doing for the others, when I saw him this time looks very old, therefore, now our new generations have more responsibility and should work harder for the world peace and for a better world,” Dr Chaichana stressed.

Geshe Tsering Choephel, a monk from Drepung Monastery told TPI As already requested several times by Dr Chaichana, the group of 50 Buddhist devotees from Thailand have got a really good opportunity to meet His Holiness and received his blessings.

His Holiness told them that ‘Both Thailand and Tibet are Buddhist nations, but we seemed staying in long-distance relationship, therefore, now the Thai and Tibetan people should keep the ongoing good relationship healthy and should have more direct interactions in the future. His Holiness also expressed his hope that there will be more cultural exchange programs between the two communities.

Ven Choephel told TPI that His Holiness usually encourages harmony among the world's religious traditions. Despite philosophical differences between them, all major world religions have the same potential to create good human beings. It is therefore important for all religious traditions to respect one another and recognize the value of their respective traditions.

His Holiness the Dalai Lama made his first visit to Thailand in 1967 while meeting with religious leaders and government officials including Prince Dhani Nivat, president of the Privy Council, and Prime Minister Field Marshal Thanom Kittikachorn. He last visited Thailand in 1993 when a group of Nobel Peace laureates held a solidarity meeting for fellow Nobel laureate Aung San Suu Kyi.

Dr Chaichana, a multi-awarded Peace Icon and Buddhist event organizer, is president of Namo Buddhaya Groups (Thailand) and President of We care for Humanity Thailand. She is also Peace Ambassador at International Women’s Group.