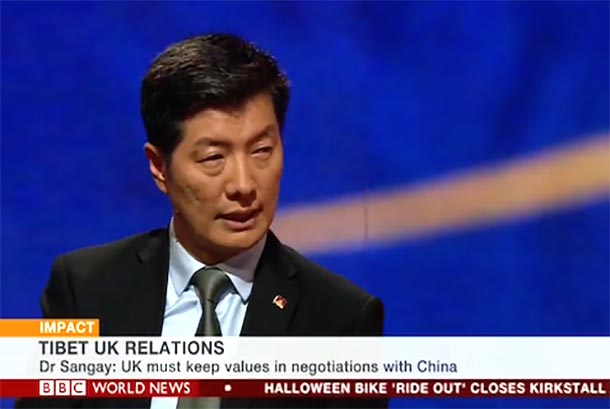 London — The ultimate goal of China is to turn Tibet into China; Make Tibetans into Chinese, that's their cultural assimilation drive," , Sikyong Dr Lobsang Sangay said in an interview with Yalda Hakim of BBC World News.

"That's true, that's their cultural assimilation drive. But Tibetan civilisation is old; Tibetan identity is deeply rooted," Sikyong said while responding to BBC 's question about the threat that looms over the freedom and recognition of the Tibetan people as China gains more prominence and dominance on the global stage.

"We have sense of pride that Tibetan people will be there on the Tibetan plateau for long time to come. In sixty years, they destroyed 98 per cent of the monasteries and nunneries. They disrobed 99.9 per cent of monks and nuns in 1960s. If you look back, in sixty years, most of the major monasteries are already rebuilt and revived in Tibet," he said

"Thousands of monks and nuns are practicing Buddhism. In that sense, from almost a complete destruction of Tibetan tradition, the revival is going on, so the revival is so strong. As you might know the Larung Gar case, where estimated 20, 000 monks, nuns and laypeople, including thousands of Chinese are there following Tibetan Buddhism," Sikyong told the BBC World News, on Tuesday, November 1, 2016.

"But now Chinese government has destroyed part of Larung gar Monastery in 2001, they are destroying again. Three nuns committed suicide just recently. If you go to YouTube, you will see that many of the monks and nuns are bundled up and put in trucks and buses and sent off," he further added.

During his hour and a half long interaction with the TSG representatives, Sikyong emphasised on the need for unity and better coordination among the different support groups to achieve the desired results. He clarified that the Administration's appeal in 2005 to the TSGs and the Tibetan community to help create a conducive environment in the wake of the dialogue process has been lifted in 2008.

Urging them to proactively undertake campaigns on the three guiding principles of conducting it peacefully, legally and with dignity, Sikyong emphasised the need to have a clear action plan for all their campaigns, especially in the wake of Chinese leadership changes in 2017 and the 60th anniversary of Tibetans in exile in 2018.