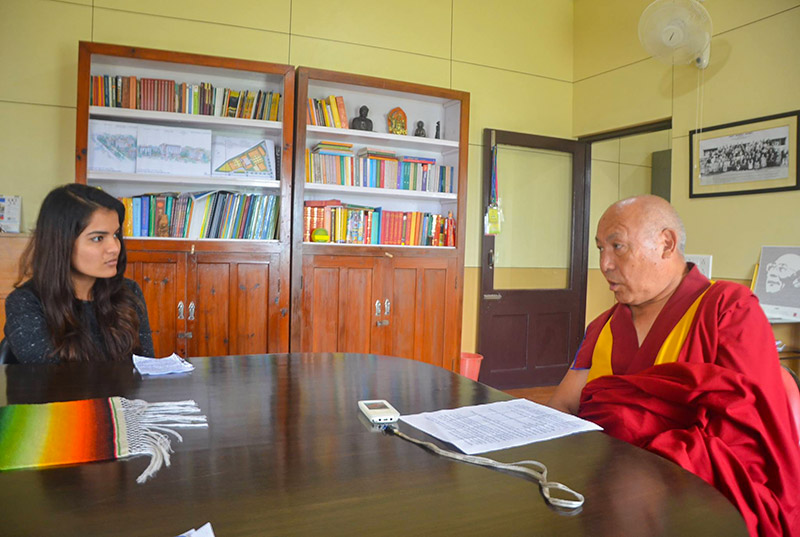 Dharamshala — "The real success can be accomplished by Tibetan people themselves. It's basically in the hands of the Tibetans," said Geshe Lhakdor, Director of the 'Library of Tibetan Works and Archives' (LTWA) during an Exclusive Interview with the Tibet Post International (TPI). Ven Lhakdor thinks it is wrong to think that Tibet will be supported by any other foreign country.

TPI had a privilege of interviewing the director of the LTWA and one of the former senior translators of His Holiness the Dalai Lama. Geshe Lhakdor was born in Tibet and escaped Tibet when he was quite young. He had his schooling from different schools and did his higher studies from Delhi University and Chandigarh University.

After completing his education he went down to Tibet house to work as a research scholar and a translator. Because of his hard work and determination he was further invited to work in the office of His Holiness the Dalai Lama. He worked there for a term of 16 years and then in year 2005 he became the director of Tibetan library of works and archives.

On being asked about the main work and the areas of focus of the library, he said that "The main work is to save the Tibetan culture.'' According to his viewpoint in Tibet itself there is not enough scope to preserve the authentic Tibetan culture and religion. The main problem that arises here is that the ruling Chinese directly or indirectly discourages Tibetans from maintaining their culture as they see this as a threat for separation and the Chinese also believe that two sources of separating Tibetans and Chinese is His Holiness the Dalai Lama and Buddhism.

After this question, TPI asked him about the number of departments that the library has and the work allotted to each department. The magnificent library has 10 departments divided into many categories. Like any other institution there is an administration department, audio visual department, Science department, Tibetan cultural department and non-Tibetan section. His viewpoint on the Tibetan situation was quite interesting.

According to him as long as Tibetans are under the rule of an oppressive regime, it's natural that they would not get peace and opportunity to preserve their own culture and religion in Tibet. He said that, "For those of us who are in exile whose population is not big so it's our task and responsibility to preserve it and I have been telling people that the real success can be accomplished by Tibetan people themselves, so it is wrong to think that Tibet will be supported by any other foreign country." It's basically in the hands of the Tibetans.

He is doing his best to save the Tibetan culture by organizing classes where young Tibetans can improve their language skills and he thinks that young generations today are mainly distracted by material resources so it makes it very difficult to preserve the cultural norms and values. His future plans for the library also includes preserving the Tibetan culture and opening Tibetan library in different parts of India. They have already identified a land in Bangalore.

TPI also asked him about the uniqueness of the magnificent library, he said that the library is unique because it is made primarily for preserving the Tibetan culture and language. It has ancient texts, images, scriptures, stupas and other artifacts. Not only do they have them but they also teach Tibetan language and culture on the regular basis for the whole year. It's not just a library but an archive where ancient texts and scriptures are preserved and disseminated.