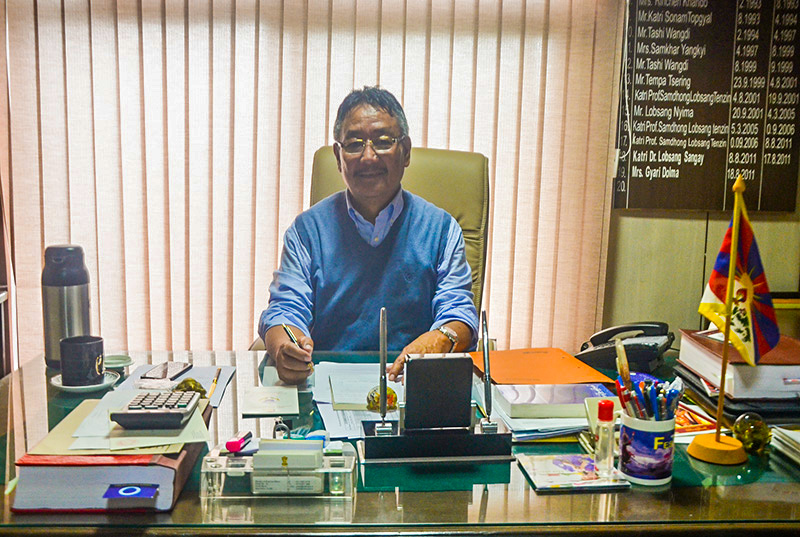 Dharamshala — "The rehabilitation is of topmost priority for the home ministry right now," said Sonam Topgyal Khorlatsang, Kalon or minister of the Department of Home, Central Tibetan Administration during an Exclusive Interview with the Tibet Post International (TPI). Mr Topgyal was kind enough to spare some time to answer a few questions the TPI had for him.

On being asked to tell a little bit about himself, there was quite a lot that the Kalon had to say. Being a self-made man he had a long journey ahead of him before he came to the prestigious position of the Home Minister. And he attributes a lot of it to His Holiness the Dalai Lama and the government of India.

Born in Tibet, Kalon came to India when he was three years of age at the same time His Holiness happened to escape to the country along with his followers sometime in 1959. Given an opportunity to have a formal education, he got admitted in a school in Mussoorie, Uttarakhand. After a diploma course, he finally got selected in the CTA staff in 1979, Orissa being his first place of posting. He moved on to being the welfare officer and managing director for one of handicraft centres. Due to a sudden influx of young Tibetans who on meeting His Holiness expressed their wish to have a formal education, His Holiness instructed that an adult education centre be opened up at Bir. Kalon then became the director of the school. Later he did his public administration at the prestigious Stony Brook University, only to come back and start his journey in the Home department in the year 1991. Starting of as the deputy secretary he slowly rose to the position that he is in today.

Listing the work that has been put in and is being put in by the Tibetan Home Ministry, he said that, "We have quite a large number of Tibetan settlements now, though. The Indian government has been very helpful. For example 45 percent of the total exiled population has settled down in the state of Karnataka. Tibetans who came from Tibet in the 1950s-1960s are mostly farmers. The government of Karnataka has been so kind to provide one acre of land per head as the main source of their livelihood. There are twelve different major settlements based on pure agriculture and these in the south are five of them."

"We have also raised a fifteen point programme in front of the Indian government", he continued. The major points of the program still pending on the table are the ones regarding the Protected Area Permit and the tax exemption. On the Protected Area Permit he explained that foreigners weren't allowed to enter Tibetan settlements without an authorised permit. "Under this point we've requested the government of India to abolish the system. If not at least simplify the whole tedious process." A lot of Tibetan refugee income also comes from tourists and foreigners. Currently, if foreigners don't have the said permit, they cannot enter the Tibetan settlements. "I'm sure the Indian government has its own practical reasons for the law. But I think it's time it was relaxed. The government has said that they will discuss this. They're already in the process of simplifying these methods." The second major point raised was the tax exemption. "Since Tibetans in India are all refugees, when the Indian government asks us to collect taxes from them, it becomes financially very hard for them. So we requested the Government of India to exempt [them] from the taxes. However, they said that is impossible for them to do." This point thus came out to be non-negotiable. He stresses though, "Nonetheless, the government has agreed to the rest of the thirteen points. The government of India (MH) has held several rounds of meetings with all the ministers and discussed all about the policy as to how it should be framed and what feedbacks are needed."

"After several rounds of having discussions whatever drafts of the policy they make are sent to the different states of India wherever there are Tibetans and send copies to all the states in the name of chief secretary with an instruction to go over thoroughly with the policy and give suggestions whatever the state government might have and have it sent back to the Central government", he said explaining the process.

"It took a little time but after all the discussions the policy was launched on the 20th of October in 2014." Kalon was the then home secretary. Telling us further about the policy he said, "In that policy, we have a lot of things to do. In terms of religion and culture, preserving it, education and a lot more other things. There's a lot of schemes too that have come up because of the program; Jan Dhan yojna, Rajiv Gandhi Awaaz Yojna, and many more schemes. All these schemes were made available to all the Tibetans."

In answer to what he'd do in his tenure as Home Minister he had quite a lot of interesting things to say. "We've formulated a policy. Now, what is a policy? It's a set of writings. Hence, it's our moral duty to approach it and get things done. The policy shouldn't just be kept as it." So his main plan of action during his tenure is to execute the program and the already formulated policy. Adding detail he said, "As I mentioned earlier, we have a lot of new arrivals every year, their rehabilitation is our responsibility. So the next home minister will have to continue the work where I left off. For example we bought land at Bir, where we've constructed 75 family quarters. The second round of construction is going on in the south of India in Belakuppe where we have around 80 families and in Mundgod where we have 60 families. We have bought lands, construction developments are on the way, and once it's done we can then see how we take up the structures further. The next round of construction will take place in Uttarakhand. There are a lot of families out there who've been living in rented houses since the 70s and 80s. It's a big problem to live on rent for so long, and we've seen quite a large number of arrivals in Uttarakhand." Emphasising on the role of funds he added, "It's totally dependent on the availability of funds you know".

On his role during his tenure he said chuckling, "I think four years for all the said things to get done is a very short time. If the entire policy materialises in that [given time] I think that's more than enough." Adding humour he went on, "And I really want my successor to do something. If I do everything he might not have anything to do. I should leave something for him to carry on."

When asked if he had any complaints with the Indian government the answer was a very prompt no. "Not at all, not at all. India has been so kind. Recently I was in Japan for His Holiness' birthday celebrations, and they asked me there how I felt about India. It's great to be in India, you know. There is no other country like India, who've been so sympathetic and have done so much for the Tibetan community. The fact that we're here today is all due to the people and the government of India. Had they not supported us, my position would be something completely different. Tibetans all over the world feel great about India. It's a great nation."

Concluding the interview when asked if he'd like to say anything to the readers of the Tibet Post and the supporters for the cause of Tibet, "So far the people and the government of India and all the well-wishers have been very supportive [of] the just cause of the Tibetan land. We'll just request them to continue doing whatever they've been doing in the past and we hope they will continue to support us in future too. Once we get our country back, we might at a time invite all our friends from around the globe to come to the Tibetan capital Lhasa and celebrate at least the birthday of His Holiness", he said smiling, with a far reaching twinkle of hope in his eye.