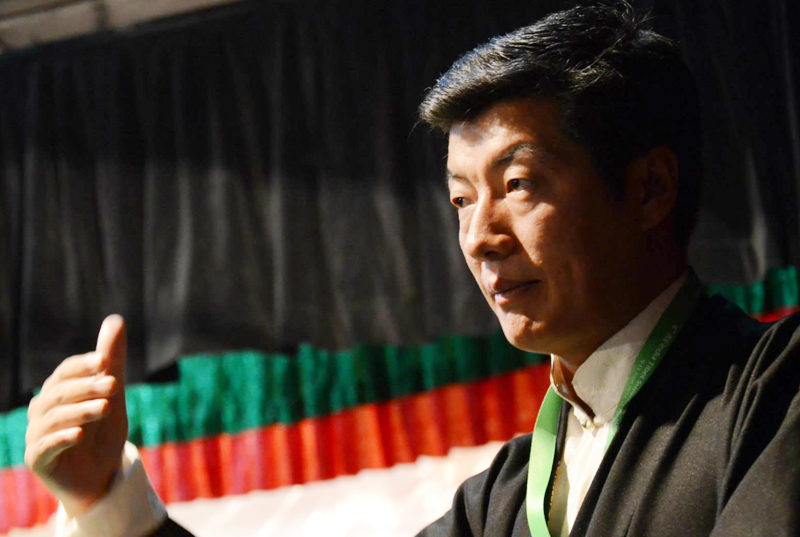 Dharamshala — "As Sikyong, I open my doors to everybody. I don't think anyone should say that I didn't get to see the Sikyong because of ideological reasons," said Dr Lobsang Sangay, Dr Lobsang Sangay as Tibet's democratically elected political leader during an Exclusive Interview with the Tibet Post International (TPI). Dr Sangay, the current Sikyong of the Central Tibetan Administration, completed its five-year term in April 2016.

1) In the past four years during your tenure as Sikyong, what were some of your most memorable moments?

The day of my inauguration, His Holiness kindly graced the occasion and he said a memorable line. Sikyong Tara Rinpoche bestowed the political power to him when he was young, and today he is transferring that power to Sikyong Lobsang Sangay. That he said is long cherishable. And the elections. And the first few months, lots of anxiousness, traveling, meetings, it's a new position and it's a political position. So it's hard to know how people will respond, how people will react. And now, hectic travels, but we have made contacts, so those are good.

So traveling-wise I have visited all the settlements, all the schools almost all elder homes. Literally I've been to almost all elder homes, shook hands with every elder in the room, been to every school, to spend time with children to tell them my story, to encourage them, inspire them. So over the past five years, since the elections until now, the public response has been very positive. Everywhere I've been people show up in large numbers; the airport, train station, or public gatherings, rallies, places like that, so that's been a bit gratifying; you work hard, people will support you.

2) You just had a three day conference on education where you spoke about the need for parent intervention and support. Could you elaborate a little more on the priority for education and the efforts CTA has taken during your term?

This was the first ever parents' meeting, so it's a long speech. If you google that you'll find a lot of speeches, because education is the number one priority. And we have invested a lot. The results can even be found in the class 12 results. 127 students getting 75% above four years ago, last year 321, this year 443. That's a 250% increase.

Scholarship has increased from 9 million rupees ten years ago, to 40 million rupees now a days. So we have found that almost 84% of teachers and staff members didn't have training, within the last 5 years, so in the next 18-24 months everybody will get workshop trainings, NCerts, everything. So we're investing quite a lot of energy and resources in education, and it's getting some results.

3) Could you tell me a little bit more on the challenges you've had to overcome? Do you have any unfulfilled efforts or regrets?

First, I think is this: When His Holiness the Dalai Lama announced he was devolving his power there was a lot of anxiousness and anxiety which kept people very nervous. But as you can see, over the past 4 years it has stabilized, everything has calmed down a lot. People say ok we can do this, we can take responsibility. That I think is the greatest collective achievement, because 400 years of the institution of Dalai Lama changed. It's a major shift in Tibetan history.

To make a smooth transition is the greatest – not mine—collective achievement. Unfulfillment, yes. Because I still meet some poor people, some divorces, a husband and many wives, maybe the husband has passed away or left them, there are two or three kids. And they come to me, and I try to help them, send their son to school here, or to college with a scholarship. We do the best we can to help them. So seeing those people is quite painful. My family is also from a humble background.

I always put myself in their shoes, I can visualize it clearly. Had my father passed away early my mother would have suffered, and if they don't give any help to my mother, I would be in deep trouble. So we always do the best that we can. Still I meet people and this is tragedy, tragedy. Death happens, sickness happens. But we have to confront it. And often when they come to me it's almost like their last solution, this is it. If I can't solve it, then what? So, these are still there. And ya know lots of people send me messages through Facebook and I wish I could respond to all of them, respond on time. So those are still there. Still lots of things to improve education upon. I'm never satisfied.

4) In terms of Tibetan women, what efforts are the CTA taking to help the progress of women?

Our society was a patriarchal society in Tibet. There was discrimination, there is no denying that. When we came to exile initially, we were patriarchal. However that has evolved over time, for the better. For example in high school there are more girls than boys, more girls graduating from class 12 than boys. Pass percentage, girls are better, going to college girls are better. Especially graduate. Almost 55%-45%, I think. Education wise, girls get more scholarships, proportionately there are more. In terms of staff members—new recruits – there are more or equal number of women joining CTA. But unfortunately its seniority—senior level, in terms of bureaucracy, who gets promoted based on seniority, there are very few women. They have to work longer.

Then they become additional secretaries' secretaries. Now we have a few additional secretaries, several joint secretaries, many under secretaries. As they get into seniority there will be more women. In the Kashag, I appointed two women. Not because they are women, but because they are capable. They are handling two of the largest departments: International relations, both largest in funds and staff; and home, large due to the large number of settlements she has to run. So we're doing the best we can. Now there is also the mother child project. Before, it was 45 days maternity leave, now it's three months. We have made it universal. Also the after school programs and things like that, so we have made some improvements. These days there is no discrimination, anyone can join CTA, education wise they are doing better.

Of course. As soon as you give birth, you are given certain amount of money, milk, things like that. The mother child program is a big part of the department.

6) Your manifesto stated 'Innovation, Unity and Self Reliance' as the vision for your four year tenure as the Sikyong. What were the practical implications and the noticeable achievements that you saw in the community?

As Sikyong, I open my doors to everybody. SFT, National Democratic Party, Women's Association, they bring their groups here, if they want to come, to bring students, I say come. When I say unity I don't distinguish between what my ideological stance and their ideological stance, we can have a good debate. The door is open to anyone. I don't think anyone should say that I didn't get to see the Sikyong because of ideological reasons.

Innovation for example, Tibet Corps. We have extended opportunities for Tibetan youth around the world, including in India, people with skills to come and work with CTA for 3-6 months to a year. We provide a stipend, everything. They get exposure to CTA, they go back enriched, become better ambassadors. And then as I told you education being number one priority, we increased the scholarships. In a way that's our biggest contribution. The youth are our future leaders, and they ought to get good education. RC renewal— 5 years. It has made their lives a lot easier.

Through high school they had to go to the police station every year to renew. Now, it has become very convenient, even for college kids. Now they have 5 years. They can go to college for 3 years, masters degree and then come to renew. We have made it convenient. Now we have launched an entrepreneurship program so we are giving them incubation, pre-incubation training, loans to run a business. This is open mainly to the youth. So this and the computer training, lots of skills. In fact we have one program, if you go we give any data feeding, skills and funds to run your own business. So for unemployed youth, we are giving them training and skills.

7) During your four years, what is the progress made in the China-Tibet talk? How possible is a return of His Holiness the Dalai Lama?

In terms of possible dialogue with China, at the highest level, in 2011 the White House released a press statement after President Obama met with His Holiness, applauding the Middle Way Approach; they applauded, they supported. Just recently Donald Tusk European Council President told Chinese premier Xi Jinping in the press conference that through dialogue they have to solve the issue of Tibet.

And the foreign minister of the European Union went to China, met her counterpart and told them also. So you can clearly see the level of support for the Middle Way and for resolution through dialogue. As far as the return of His Holiness, if you look as far back as the '87, '89 protests in Tibet, the universal slogan has been we want to see the return of His Holiness.

142 self immolators. It's the common aspirations of all Tibetans. So I say the same thing. The return of His Holiness is our universal and main objective. And if you don't say it, if you don't believe it, then you are not being a leader. It has to remain our aspiration. I said it before, I say it now, I will keep saying it. It should remain our ultimate goal.

And then as far as dialogue, there are a lot of things that keep happening, before it was dialogue with envoys, now it is dialogue without envoys. So all that is going on, efforts are being made. But then it's just that dialogue is such that we would share, and we should not share. It's very delicate and sensitive. Otherwise I don't think there's any lack of effort on our part. As long as His Holiness is there, efforts will be there. So now there is no lack of efforts.

His election in 2011 marked Dr Sangay as Tibet's first democratically elected Sikyong, and Dr Sangay supporters recently have helped to collect a "10 outstanding accomplishments" achieved under his leadership. His supporters request the Tibetan people across the globe to re-elect Dr Sangay, outstanding leader, eminent scholar, and dedicated Tibetan.