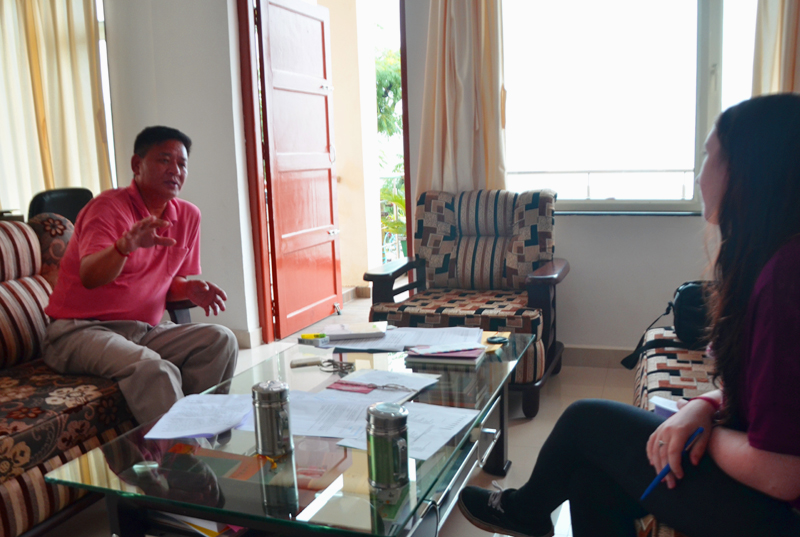 Dharamshala — "I can be the people's Sikyong," said Penpa Tsering Sikyong Candidate during an Exclusive Interview with the Tibet Post International. Mr Tsering is the current Speaker of the Tibetan Parliament in Exile, who recently announced his candidacy for 2016 Sikyong election.

1) Mr. Speaker, can you brief us on your decision to stand for Sikyong in the 2016 elections?

As I always say, first there has to be a decision from that person's mind that I have to do this. That is most obvious. Then you need the ability to do it, but that alone is not enough. You need peoples support. In my case, there has been a nomination by the National Democratic Party of Tibet along with Lobsang Sangay, and then the Tibetans from Central Tibet decided to support me, so that was added incentive. Also there has been a lot of individuals approaching me saying please don't say no this time. Also you need a karmic destiny to reach that. So if all those come together then there is the possibility to become Sikyong. Right now, I can say these three seem to be coming together, but no one can say for sure.

2) What are the main aims and objectives of your candidacy?

The overarching effort or what is of most priority is to take all the Tibetans with me; all three provinces, all religious traditions, and I think I have the skills to do this. I have managed to do this in the House as well. His Holiness has worked so hard in the past 60 years and we always had differences in opinions among provinces, which has calmed down a lot in the past 10 or 15 years. That has to be maintained. So irrespective of people who work for me or don't work for me, it will be my job to make sure any differences of opinions, big become smaller, smaller become reduced to nil.

The Tibetans inside Tibet are looking at us for inspiration, we are looking at them for inspiration, so it is essential that the administration is maintained in a democratic manner, and in a way that people appreciate for having the administration; make it more inclusive, rather than exclusive. So I know if I am Sikyong I am sure with my experience here as speaker and member for the last 19 years will serve me very well to work together with parliament on certain issues, and separate on administrative matters, because you know separation of power checks and balances.

Then of course there's the issue of Tibet, but of course that is not something we can decide independently, we are dependent on China for how the process goes on. Therefore our effort should be from every angle whether it's through politicians, or whether it's through business people, or whether it's through intellectuals that we reach out to Chinese leadership and make them aware that solving this issue is in their benefit. And the situation inside China is changing rapidly; politically, economically. So we should be in the position where when the opportunity strikes we are able to take that opportunity. Until that time it's our job to keep the Tibet issue alive.

Of course then for every department, I have my own ideas about what needs to be improved or changed.

3) And in the same vein, if you were to become Sikyong in 2016, how would you go about unifying the Tibetan community?

It all depends on how you react or take up situations. Whenever you act on certain things, if you don't differentiate on the basis of provinces or religious traditions, reach out to all the provincial leaders, religious leaders. Including all those Tibetans, as there are now quite a number, who are expert China watchers. Seek their guidance, their expertise in terms of improving our policies and programs. So my ideas can make it all inclusive, so in that way we can move forward.

4) What sets you apart from other candidates?

I am a very normal person. In whichever post I have been or am, I have always been with the common people, very approachable. I have this whole lifetime of experience, starting from growing as a farmer, having worked on a farm, living in hard conditions, coping with difficulties, working for the cause at a very young age. And now in the last 10-15 years, particularly as director of Tibetan Parliamentary and Policy research center having so many workshops, conferences, both internationally and in India.

I have reached out to-- except for maybe a few I have visited most all of the settlements to organize workshops, addressing their local problems. So in that way, I think I have the maximum experience. My personality is also such that I get along with people, I don't try to play hard to get and I'm not that kind. So, I can be the people's Sikyong.