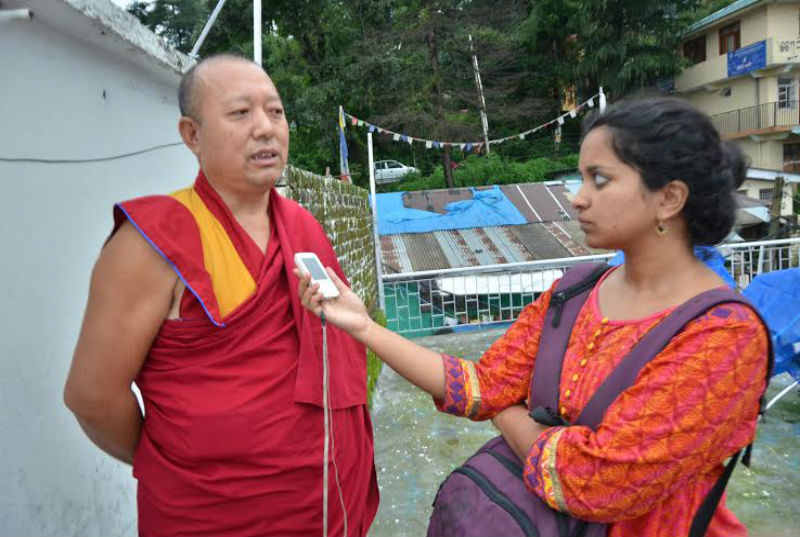 Dharamshala — On July 12, revered Tibetan monk and political prisoner Tulku Tenzin Delek Rinpoche died in a prison in China. The Tibet Post International spoke with his cousin, Geshe Nyima, a monk from Drepung Gomang Monastery in South India on the case and its aftermath on the family and the Tibetan community.

1.       Could you elaborate on the significance and role of Tulku Tenzin Delek Rinpoche in the Tibetan struggle?

Ans: Tulku Tenzin Delek Rinpoche was highly respected around the world. For several years, the Tibetan culture and religious practices had been restricted by the Chinese government. However, his efforts helped in recognizing and preserving the native Tibetan culture. He worked towards the upliftment of nomadic communities, poor people and orphans by providing them access to education. He also established nine monasteries near Lithang in Tibet. He also worked towards the protection of the environment and the Tibetan habitat. He strictly condemned hunting and any harm on animals. During his lifetime, Rinpoche spearheaded several movements that tied together Tibetan art, culture and life.

2.       Over the past 13 years, ever since Tenzin Delek Rinpoche was forcefully imprisoned by Chinese authorities, what kind of struggles did the family go through? He kept proving his innocence, but the Chinese authorities did not pay much heed.

Ans: Ever since Rinpoche was falsely framed in a case by the Chinese administration, the family has been having a harrowing time. Over the past 13 years, the family was not allowed to meet him often. They were allowed access only six times. Despite repeated pleas and demands, the Chinese authorities did not give them any permission. The last time they managed to meet him was in 2013, when he was already very sick and frail. Based on his condition, they also sought his release on medical parole. However, their requests were not acknowledged. In fact, they were also trying to arrange for their own lawyers, who could defend Rinpoche’s innocence. Again, this request was not considered. Moreover, the entire family was constantly under the police scanner and all their movements were closely watched. This was a big setback for them all.

3.       There have been reports about the ill-health of the 65-year-old Tibetan monk even while he was in prison. Despite repeated please, the Chinese refused to budge. Finally, the authorities said that he died of a cardiac arrest. You think anything could have been done earlier to save his life?

Ans: The last time Rinpoche’s sister met him was in 2013. After their last meeting, it was identified that Rinpoche had a grave heart condition. Despite the family’s demands, the request for release on medical parole was rejected. I personally think that the police deceived us. We had been informed that Rinpoche was lodged in a very well equipped prison and looked after well. In reality, however, he was living in a place that resembled a dungeon. It was very small and suffocating. On account of such poor care, his condition further deteriorated.

4.       Two weeks after your Rinpoche was reported to be dead in Chinese prison, there remains no clarity on the nature of his death. The Chinese authorities also refused to hand over the body to the family and disciples for performing the final rites. There have been reports that he was “poisoned and murdered”. What has been going on in your mind?

Ans: Yes, even as the Chinese police authorities continue to claim that Rinpoche died because of a heart condition, I am hundred percent sure that it is not a valid claim. For, during the guarded funeral that was carried out by the Chinese authorities on July 16, some of the disciples who attended it said that they were suspicious of the nature of his death. They informed us that his nails and lips were black, which clearly indicates that he was poisoned and murdered. It was certainly not a normal death. Another reason to question the Chinese ploy emerges from the days leading to July 12, the day Rinpoche was declared dead by the Chinese prison authorities. Exactly ten days before the incident, Rinpoche’s sister and niece had been granted permission to meet him. However, for ten days, starting July 2, the duo were made to endlessly wait with no sign of the meeting. On July 12, the police announced, “Rinpoche is dead”. Also, when his disciples reached the Luding Bridge for dissolving his ashes in the water, the police authorities seized it from their hands almost immediately after the funeral. These events are clearly not adding up together.

5.       Even your family members were detained by Chinese authorities when they went to seek his body. Similarly, protestors have been grievously injured and beaten up. What do you think about this form of oppression?

Ans: Yes, a day after the funeral, Rinpoche’s sister and niece were detained by the Chinese police. We have no information about them ever since. During the same time, the police launched gun attacks and bombed areas where peaceful protests were organized. The Tibetan protestors were unarmed. As a community, we were deeply hurt. However, in reality, attacks on innocent Tibetans by the Chinese has become a part of their everyday struggle.

6.       Cases of prison deaths of Tibetan political prisoners have become very common in Chinese prisons now. What is the kind of action that needs to be taken, in your opinion?

Ans: The case of Rinpoche is high-profile and has been discussed even in the international media. We hope that these discussions shall eventually ensure that several thousands of Tibetan political prisoners in the future do not meet with a similar fate in a Chinese prison.

Ans:  The solution to the existing struggles that Tibetans and Tibetans-in-Exile are facing today lies in unity. It is very important for them to unite and spearhead political movements that will define freedom for the people, who have been braving severe oppression for several decades now.