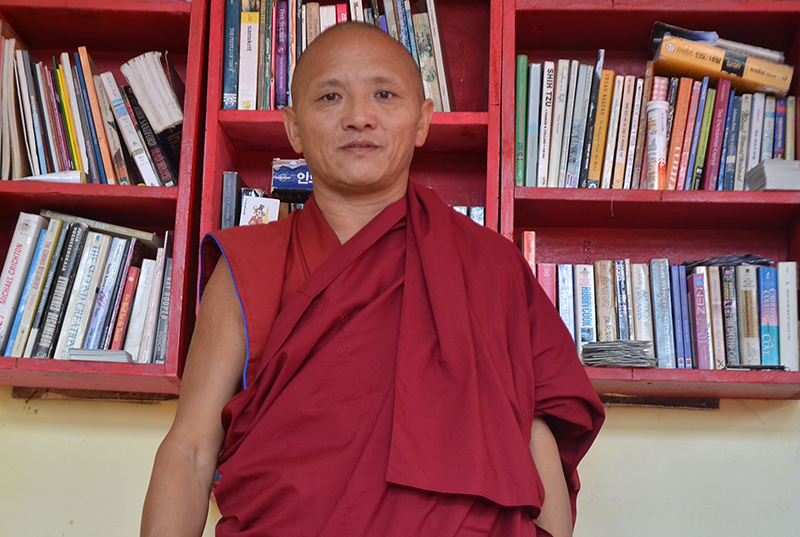 Dharamshala — "Tibet was a free country and the Chinese occupied it, I slowly came to realize. So, 21 monks decided to start the struggle for our freedom. On September 27, 1987, we began the struggle."

It was a Sunday. 21 monks processed from Drepung monastery to Barkhor, the center of Lhasa. His Holiness the Dalai Lama was traveling extensively to western countries, speaking about peace and compassion. Meanwhile the Chinese media was using this as propaganda, calling His Holiness a separate on the news, on the radio, and on television. There had been no protests, no uprisings in Tibet since 1959, almost 30 years prior. But on this day, Nawang Wombar and 20 of his counterparts' demonstration, unknowingly snowballed into some of the largest and most significant uprisings that occurred in Tibet. Today, September 27, 1987 is seen by Tibetans as an inspiration to continue the struggle for Tibetan independence through non-violent and peaceful means.

After four months in prison, during which time great protests swelled within Tibet, yielding the imprisonment of hundreds more monks and nuns, the 10th Panchen Lama negotiated the release of all political prisoners, with the promise of quelling the uprisings.

"In the same day four different jails released all the political prisoners. All the Sera and Drepung monastary monks and Chupsong nunnery nuns were released in addition to other lay people. On our day of release, Chinese police met with all the political prisoners, during the meeting they said all of you are only temporarily released. If you are arrested for protesting a second time, you will serve double the time."

It was only after one short year inside the monastery when Nawang and 46 other monks were abruptly expelled from their monastery by Chinese authorities in April 1990. Expulsion of monks and nuns from monasteries was and continues to be a common practice by Chinese authorities, as an effort to weaken the religious institutions of Tibetan Buddhism.

Only shortly after, Nawang and his fellow former monks began distributing Free Tibet material and continuing to protest. "After Losar, I heard that the Chinese police were going to arrest me. April 21st, 1991 all of us escaped to India. I was prepared to temporarily stay in India, take audience with the Dalai Lama and return back to Tibet. I talked to the Dalai Lama and told him my plan to return to Tibet, but the Dalai Lama said 'you will stay here and begin studying.' So I remained in exile."

Today, Nawang Wombar is known as one of the founders of the Gu Chu Sum movement. Gu Chu Sum are the Tibetan numbers 9, 10 and 3, standing for September, October 1987 and March 1988, months which saw three massive pro-independence rallies in Lhasa. Many of those who took part were imprisoned, savagely beaten and sentenced to hard labor. Several demonstrators were killed and many seriously injured. In Dharamshala, Gu Chu Sum provides food, shelter, financial help, medical attention, education, job and psychological support to former prisoners who have arrived in India.