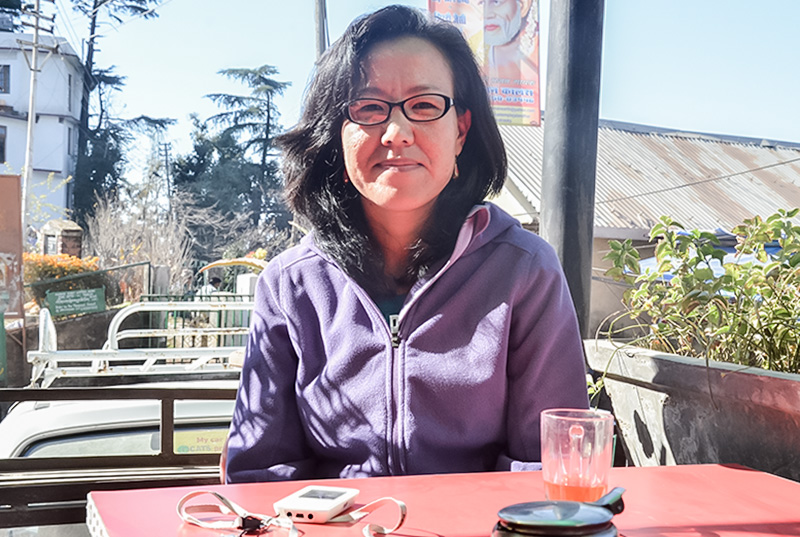 Dharamshala: - In an exclusive interview, Choneyi Sangpo, editor for Tibetan version, the The Tibet Post International (TPI) discussed with Kunsang Dolma on her Book- "A Hundred Thousand White Stones."

Kunsang Dolma: I am from Amdo, from a village called Maktangcun near Guinan. I only went to school up to 3rd class. After that I had to leave school to help my mother with work on the farm. At age fifteen, I went to become a Buddhist nun.

Three years later I escaped into India in 1999. I studied at the Tibetan Transit School for four years and was no longer a nun when I left school. After 2004 I met my husband, Evan, then in 2005 we married and went to America, in Maine. I didn't see my family in Tibet again until 2010.

Kunsang Dolma: I didn't plan to write a book, but after I my daughters were born I thought if I wrote down my story they would learn form it. Because I am a woman I had experience with sexual violence, so I wanted my kids to be able to learn from that. With each story we wrote down, I felt releif from no longer holding these things back. I had never told anyone about my experiences before that. I starting thinking about how many women in our community are in the same situation, and thought it might help them let go of the pain they've been holding in too if my story came out.

Tibet Post: When will the Tibetan translation of your book be ready?

Kunsang Dolma: A Tibetan in Australia, Gonpo Sonam, is translating it. He has finished four or five chapters but I don't know when he is going to be finished.

Tibet Post: What do people in the West think about your book?

Kunsang Dolma: In the West, not so many people know much about Tibet. A lot of people don't even know China is controling Tibet, that we don't even have our own country. My book starts with my parents' experiences during the Chinese occupation of Tibet, goes through how I escaped into India, and talks about refugee life.

Many Western people are happy to learn about Tibetan culture and what is happening in Tibet. Some Westerners who do know a little about Tibet only know the Shangri-la image, that everyone is a spiritual Buddhist and a great person just like the Dalai Lama, so they are glad to find out the whole story about both the good and the bad.

Kunsang Dolma: A lot of people are supportive, the people who support my book think it's good for the whole truth to come out. Other people are against it, they say I'm letting out Tibetan secrets that will make Tibet look bad to Westerners. They don't want the West to find out anything different from the Shangri-la image.

My book talks about violence and sexual abuse, which these people want to hide, but if we pretend these things aren't going on we can't cover up the truth forever. When Western people figure out that we are hiding the truth from them it will only make us look worse. For example, if we are good friends and I found out you are hiding something from me I wouldn't be happy with you.

Tibet Post: Why is you book named A Hundred Thousand White Stones?

Kunsang Dolma: Two of my brothers are twins. Just before I left home, one died and the other one became very depressed. After 2010 when I went to visit my family a lama said the living twin needed to collect a hundred thousand white stones for a special ceremony to improve his life. The whole family worked together picking up tiny white stones for days, that story is in the book. I thought it was nice, and also for me my journey has been like this, slowly getting closer to my goal one tiny piece at a time.

Tibet Post: Do you plan to write a second book?

Kunsang Dolma: Yes, I am working on a second book. The first one is only my story coming out. I didn't put much emotion in the first time, it wasn't easy for me to let the story out at all. In the second book I'm looking at dealing with my emotions and the healing process after trauma. Hopefully people can learn something useful from my experience.

Tibet Post: Is the book in more of a Western style or a Tibetan style?

Kunsang Dolma: Western memoirs are more honest and straightforward, we don't have much like that. In my book, I include experiences like my father being an alcoholic and beating us often. Some Tibetan readers think I slapped my father by bringing up these things in the book.

People see that and just focus on the negative details, they're shocked and can't even see the whole story because they aren't used to straightforward memoirs like in the West. Also, some people think I married a Western person then turned around and made Tibetan men look bad. Really, my book is my own personal experience, there's nothing in it about making anyone look bad.

I've heard people say my family must have no idea I wrote this book because it has both the good times and bad times, and I guess people think we are supposed to hide the bad times. Actually, when I was originally thinking this could be a book I asked my family what they thought. At first they were confused, they didn't have any experience with this kind of book.

After I explained the details they were happy for me to have a book, my brothers kept asking me if I was able to get it published or not. I am very excited that one day they will be able to read it in Tibetan. When my father listened to my interview with Radio Free Asia him and me both felt sad and cried. Later, he told me everything I talked about was the truth and that's all that matters.