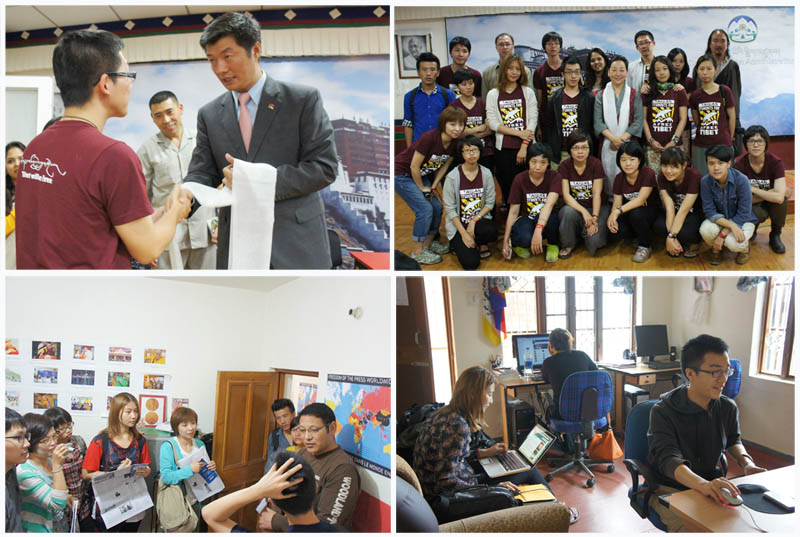 Dharamshala: - Volunteer journalist Yushuan Nyima from the exile Tibetan news agency "The Tibet Post International" discussed with three members of SFT Taiwan (Students for A Free Tibet-Taiwan) on their two-week experience in Dharamshala. After visiting several Tibetan organizations based in Dharamshala, India and meeting some Tibetans friends with the help of SFT India, they have built a deeper understanding about Tibetan community in exile.

Concerning what is the most impressive part in Dharamshala so far, the National Director of SFT Taiwan, Xiao-feng remarked, "what impresses the most after I came here is the experience at TIPA (Tibetan Institute of Performance Art). In Taiwan Kalsang Chukie is a renowned and respected singer, whose performance, as I presumed, should be in a grand, spacious auditorium where audience are as silent as the dead, with full attention to the beautiful sound said to be like the singing of a "nightingale."

"But this was not the case at all" he said. The audience was so noisy, as if her voice was almost drowned. At the beginning I thought they were being rude to the performance—not until did they start following the song did I realize this is their way to show enthusiasm. Different from the quiet scene in Taiwan, the opportunity gave me quite a new aesthetic experience."

Another SFT member, Yu-wei, who majors in Drama, shared her experience with us about the Tibetan religion. "I made a blunt admit about my suspicion on religion in a conversation to a Geshe here: it is difficult for me to be convinced by any religious doctrine. I thought this would have been rude and offensive—but, instead, the Geshe encouraged me to question and be skeptic!" said Yu-wei, surprised.

"He believes that only through profound reflection and dialectic process can we trust the truth that the world gives us and what Buddha would like to tell us. The more we question, the better can we understand truth. This concept is so different from other religions or that in my experience," said Yu-wei, alongside with Xiao-feng being touched as well.

Speaking of cultural differences, Yu-wei also talked about what makes her most comfortable. "The honking horns. In Taiwan, if someone honks at the other, it might provoke a race or fight on the road; therefore, when I first arrived here, I was really uncomfortable with the annoying sound," she said.

"But this was changed after an incident. On the way back to guest house, in extreme pain due to physical reason, an Indian insisted on giving her a ride. She continued, "honking was all the way down to the destination. But after that, I realized that people here honk out of no spite but warning pedestrians of the danger of being hurt, which is actually their unique way of being considerate, I think.," she further added.

Because three of the interviewees all come to Dharamshala for the first time, I asked them if there's anything have changed after they came here. "Before I came to Dharamshala, I thought Tibetans would be very shy, introverted, and uneasy at speaking of their own experience or talking with people from other places;" said Yu-wei,"but as it turns out, most Tibetans are generous about sharing their stories with us. More active and optimistic than I thought, Tibetans gave me a new impression of perseverance and optimism, even though in painful struggle."

Ping-ling Lu, a senior student majoring in Law also talked about the cultural differences and how her impression on the people here changed. "After visiting some organizations and making friends with several Tibetans, I realize that culture and religion are really essential to their lives,"she said.

"Unlike us, in Taiwan, religion might just account for merely a small part in our daily lives, but it is not the case at all here. Every word they say and the ultimate goal they wish for are always about or under the influence of Dalai Lama. The culture shock, a mild one though, really changed my original knowledge about Tibetans," said Pin-ling.

Having been concerned with Tibet issues, the National Director of SFT Taiwan also has deeper feeling for Tibetan community visiting Dharamshala. " Someone told me that Tibet issues are not so much about human rights but about their culture and religion.At first I did not quite understand—until I really came to know Tibetans in exile and be here in Dharamshala," he said.

"The reason is that Tibetans' life is so closed to their religion and culture, both of which are essential to their whole value system and philosophy. This is difficult for others to understand unless they have experienced it for themselves. I wake up every morning after I came here, and saw all similar faces on the road to the main Tibetan Temple (Tsuglakkhang); it takes real experience and seeing to believe how intimate culture and religion are for Tibetans," he concluded profoundly.