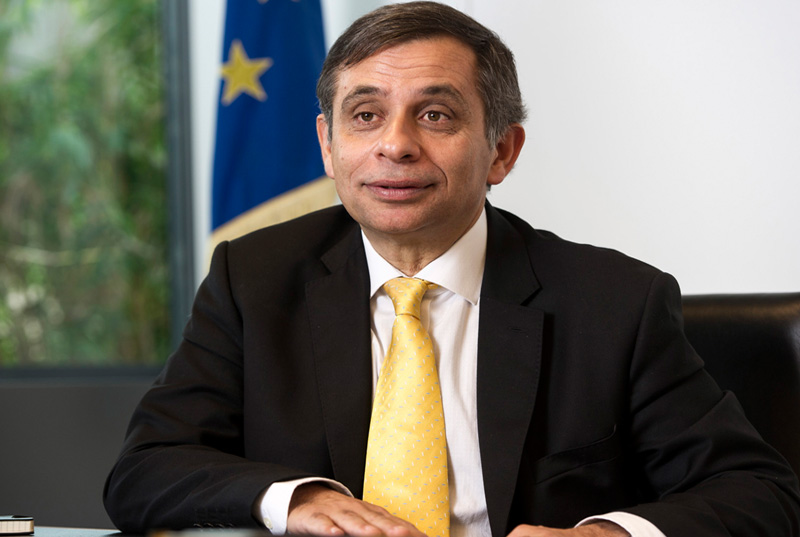 Dharamshala: Elected as the new president of the European Economic and Social Committee (EESC) on 17 April 2013, Mr Henri Malosse – a French national with a vocal stance on Tibet, has an enormous role to play in the European political field. Set to adopt a strong stance on Tibet, and having been present at events such as the Tibet Solidarity Rally on 10 March in Brussels, Mr Malosse is unafraid to speak openly about both the human rights situation in Tibet, and of his priorities as EESC president.

In an exclusive interview, The Tibet Post International (TPI) discussed with Mr Malosse his new role, and his position on Tibet.

TPI: 'It is clear that you take a strong stance on Tibetan issues, as you demonstrated at the March 10th solidarity rally in Brussels. Are you willing to continue to speak candidly about Tibetan issues, now that you are president of the EESC?'

HM: 'I'm a defender of European values, the ones that have built the European Union, everywhere I go. His Holiness the Dalai Lama himself expressed admiration for the work of Europe's founding fathers and admitted that he had once had similar hopes for Asia. The European project is an example that gives us a responsibility to convey the values of freedom, democracy and solidarity loudly and clearly across the world. I won't betray them now that I'm president of the second Assembly of Europe'.

TPI: 'The human rights crisis within Tibet continues to deteriorate, with the majority of European leaders and organisations remaining silent on the issue. If the economic crisis in the Euro-zone continues to deepen, would you be willing to remain an advocate of Tibetan issues, and what steps would you take to ensure those issues are brought to the table?'

HM: 'I have the certitude that we won't find an exclusive economic solution to the recent crisis. The sustainable answer must be economic and social – and the people's opposition in Cyprus or Spain shows that I'm not wrong! So I'm certain that we have never needed the voice of the civil society so much. And I'll be willing to fight for freedom in Europe and everywhere it is in danger'.

TPI: 'Funding for Tibetan NGOs is a pressing issue in Dharamshala and India more generally. Many small Tibetan organisations find it extremely difficult to engage with or even understand the funding application processes of bodies such as the EIDHR, and are also lacking in organisational and administrative experience. Would you propose any reforms to facilitate funding applications, such as sending EESC delegates to India to work with Tibetan NGOs? Does the EESC have any plans to send a delegation to Dharamshala in the foreseeable future?'

HM: 'As the representative of civil society, the EESC has a strong policy to develop relations and help economic and social stakeholders wherever possible. We'll be at their side to hear and work with all the actors of the social and economic world, in and outside Tibet, because our committee is convinced that no development is possible without the involvement of civil society as a whole'.

TPI: 'Would you agree with the sentiment that Europe is 'Feeding the economic dragon' of China itself, and is failing to heed human rights abuses by China, because of its own economic interests? If so, how what role would you propose that the EESC takes in addressing this issue?'

HM: 'I invited Mrs Dicki Cheyang for the inauguration of my Mandate, and this is the best signal to China and the other institutions. In my answer to Chinese Authorities which try to apply pressure against this invitation, I have reiterated my openness to a dialogue with China on values. My engagement in favor of the Tibetan people is not at all a hostile act against the Chinese nation. On the contrary, my doors will be always open for what is needed to solve this conflict – as with all the others – DIALOGUE'.