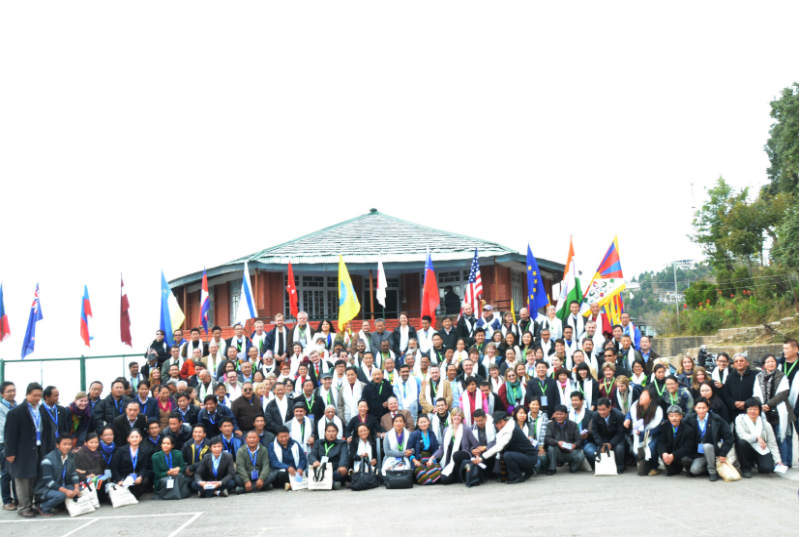 Dharamshala: - A 3-day emergency meeting of the international Tibet Support Groups (TSG) concluded in Dharamshala, India with an urgent appeal to the international community to press the Chinese government to find a lasting and mutually-agreeable solution to the problem of Tibet.

India based Tibetan news agency, The Tibet Post International has interviewed minister Dicki Chhoying and five delegates of TSG, asked them to express their opinions and thoughts on agendas they discussed in the special meeting.

"I am satisfied Yes and No, yes, because, there is a good international support. And no, the agenda of these kinds of meeting remained very limited, said Mr Vijay Kranti, a prominent journalist and a long-time friend of Tibet, when asked if he was satisfied about the issues that are being discussed in the special meeting.

"As an Indian participant and Tibet supporter for last 40 years, I sincerely believe that Tibet should have total Independence (Rangzen) from China," he said.

"Nothing less than Rangzen will help Tibet, because we have already seen Tibet with Chinese for over past 60 years, the way they treated Tibetans; kind of assurances they have been given and walking back-on-back," he added.

The Indian journalist said "Tibet deserves independence, it is the only solution to bring peace to India, Nepal, and to the rest of Asia."

He said that Tibetan self-immolation protests are "very unfortunate. Its really shameful that after 76 self-immolations in the country, the rest of the world is still keeping quiet and Chinese government shamelessly blamed that they are terrorists," he added.

"It is a shame that the international community and members of the United Nations are still keeping quiet. It's also shame on anybody who believes the value of the democracy, and Human Rights; claimed to be civilised that we have done nothing to stop the situation which leading the self-immolations," he stressed.

"Last two days, we had a very fruitful introduction, people from over 40 countries were participated the special meeting, but, we all have same feelings; how can we make difference, show our solidarity with Tibetans inside Tibet and and support them," said, Phuntsok, a popular singer from Ladakh.

"China should be pressurised by the international community to address the regime's suppressive and inhuman activities in Tibet. China should know that if Tibetans can burn themselves, they can burn China one day," said Phuntsok.

He said, Chinese leader should realise that over last six decades they couldn't win the hearts and minds of the Tibetan people. "They will never win, because, we are not the Chinese. Tibet has a very different religious and cultural identity from China."

The singer also said, the world is inhuman and cynical toward the tragic situation in Tibet. "Its very sad and unfortunate that the world is turning its face away and insensitive toward the tragedy of Tibet. Because no nation has said, China has murdered over 70 Tibetans. The international must act now, keeping quiet is not the option nor good for the world peace."

"After concluding this meeting, we are more optimistic and became more energetic. One of the most important things is now; we will go back to our own countries with energy and empowerment to do more as Tibet issues are always being critical. Because, the Tibetan self-immolations of the last three years, specially, its became more desperate in last couple of weeks," Telo Rinpoche, the spiritual leader of Kalmykia Republic, said during the final day of the meeting in Dharmshala.

"We must have to take desperate measures to make our voices heard, behalf of all Tibetans inside as well as those who are living abroad. Now the main key thing is, we should not waste the time and we must act fast. Every day/month of the coming years have to set-up even more pressure on China than before," Rinpoche added.

He said that the international governments and the world leading news media are not doing enough about the present tragic situations happening in Tibet. "Of-course, they are doing not enough. There are too much diplomacy and bureaucracy involved, the governments emphasized more about economy development, rather than developments of Human Rights."

"Therefore, I think, the Human Rights issue should be priority. The issue of liberty, freedom and democracy should be the key priority of any democrat and free country. So, right now, its very unfortunate that the the economy is even more important than Human Rights, Rinpoche further said.

"Nevertheless, we are currently in the 21st century, we can change the situation and attitudes of the governments and politicians by involving/carrying-out campaigns and outreaching the media, including using the all tools of the social networking media to reach the messages across the world," the Buddhist leader said.

"I have been attending this meeting since past twelve years, The style of discussions and meeting agendas are not changed much from the pasts, of-course some changes happened as quite slide," a participant from Europe stressed, with fear of the Chinese authorities' pressure on him, regarding his involvement the meetings.

"I think the main goal of this meeting is to promote the situation of Tibetans inside Tibet, as far as Sikyong Dr Lobsang Sangay pointed-out at other day. It is not archived when I think, he pointed-out. I am not fully satisfied, because, my point of views, there are more important issues to address," he said.

"To give you a single point, which I consider as a very important, is support for the victims or families of those who have committed self-immolation." He said "its an extremely tragic and undesired as increasing day by days."

"There should be deep humanitarian aspects to those families; including fathers and mothers who left their children behind. Already very difficult everywhere, particularly in Tibet, these families will be even more marginalised in future," he continued.

"Therefore, I think, one of such priorities should be to raise a kind of international fund and secondly a way such funds reach the families, this is much important than discussing unrealistic campaigns," he said.

"We came here with urgency this time and with a background of so many Tibetans, who have self-immolated in past two years. The situation has became more intensified in recent months. Those participants from all parts of the world concerned freedom in Tibet and the current situation in the region," said Dr. Yang Jianli, a Tibet supporter and democracy advocate from China currently based in US.

"We have worked together, come-up with ideas, how to carry-out the projects we have have chosen. So, we are recommitted ourselves to the efforts to help and empower the Tibetan people to chose their own future," he added.

"And we worked together to push the western governments to act collectively, responding to the crisis in Tibet. So now, we are refreshed, also re-in-charged and we will go back to our respective places to continue our efforts," Dr Yang said.

"This time, one special occasion that really touched me deeply by having a brief meeting with His Holiness the Dalai Lama. He hold my hands, we talked about the self-immolations, I saw tears in his eyes twice, this really have made a great impact on my heart and also recommitted to me, ever strong to the cause of free Tibet," he further added.

"Today, I called for a campaign of truth, which will be targeted the democrat governments and the Chinese people. I think, the western media not cover enough about the current crisis in Tibet, their governments are being too silence on it and the Chinese general public is too apathy on Tibet. These are things, we have to address, because, silence is no longer an option for today's world," Dr Yang stressed.

"Many indigenous peoples in Nepal, including Newa people want to see His Holiness the Dalai Lama in Nepal, it is not easy, because our government face a strong Chinese pressure. But, it is not the whole story of Nepal, people to people and heart to hearts, Tibet and Nepal very close friends each other," said Prof Badura Shakya from Nepal.

"Representatives of 45 countries have participated the meeting, they all strongly expressed their concern over the issues of Tibet, we are all one as one team that Tibetan people have been suppressed and dominated. There is no Human Rights, freedom of speech and religion in the region," Prof Badura added.

"Over 200 members of the Tibet Support Groups (TSG), including 20 Chinese delegates, from 43 countries carried out extensive discussions to find ways to end the self-immolation crisis in Tibet during their three-day special meeting in Dharamsala," said Ms Dicki Chhoyang, Kalon or minister of the Department of Informational and International relations, CTA.

The minister said that "they had two days of discussion and action plan, which finalized today. In the action plain, they agreed to work on four issues;

1. To create multilateral contact groups of different countries to address the issue of Tibet and its current situation.
2. To expand the Lhakar movements (White Wednesday Movement) to more 25 countries.
3. To lobby, so that China is not renamed as a member of the UN Human Rights Council due to its Human Rights track records in Tibet and China.
4. To form a coalition with the groups in the eight downstairs neighboring countries are effected by water-managements issues in Tibet."

The TSG meeting also issued a statement on the conclusion day, they expressed solidarity with Tibetans inside Tibet for their unwavering determination and commitment to non-violence in resisting China's policies to undermine Tibet's culture, language and religion.

"They said the responsibility for this crisis lies with China's past leaders and their failed policies over the last 60 years. Social and economic marginalisation of Tibetans in their own land are contributing factors in the escalation of self-immolations and must be urgently addressed, they added.

They called on China's new leaders to take immediate steps to address the legitimate grievances of the Tibetan people, recognising that a peaceful resolution is in the best interests of both the Tibetans and the Chinese people.

They urged the governments take urgent and coordinated action at the United Nations and in other international for a to press China to change its failed policies in Tibet.

"We renew our commitment to work together and in cooperation with Tibetan organisations and Chinese human rights defenders around the world in pursuit of a political solution to the Tibet issue consistent with international human rights standards," the TSG members said.