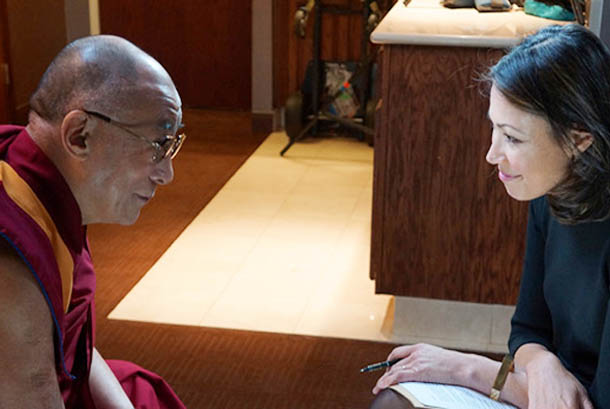 New York: - The spiritual leader of Tibet, His Holiness the Dalai Lama was interviewed by NBC's Ann Curry during his October 2012 Visit to Syracuse, New York, USA. The interview was originally broadcast on 11 October. Excerpts:

Ann Curry, NBC: More than sixty Tibetans have set themselves on fire in the three years, expressing a desire for greater religious freedoms and a desire to be able to speak their own language? Their deaths have brought no change from the Chinese. Have they died for nothing?

His Holiness the Dalai Lama: It is difficult to judge whether these kind of methods are right or wrong. They are expressing in a non-violent way regarding the Chinese policies [in Tibet].

Ann Curry: One young Tibetan set himself on fire two days ago left an online statement that read: "If we reflect on the past we can see nothing but signs of defeat, anger, anguish and tears." What should your people do to express these feelings? Do you support their decisions to set themselves on fire? Do you want them stop setting themselves on fire?

His Holiness: I always consider myself as the free spokesman of the Tibetan people, and not their boss. My boss is actually the six million Tibetans in Tibet. I am in free country and quite comfortable. But they are passing through a very desperate situation, so they take these decisions. I am quite certain that those who sacrificed their lives with sincere motivation, for Buddha dharma and for the wellbeing of the people, from the Buddhist or religious view points, is positive. But if these acts are carried out with full anger and hatred, then it is wrong. So it is difficult to judge. But it is really very sad, very very sad.

Ann Curry: Through out history, the least powerful are repressed by the powerful. And in some cases, the powerless fight.

Ann Curry: In the region of Tibet how long they might ask is this going take their setting themselves on fire out of desperation?

His Holiness: Six million Tibetans and so long the Tibetan people remain, the Tibetan spirit will carry on. Now judging the past 60 years' event much has changed in China. I think the next 6o years will see more changes. The world's trend is towards democracy, openness and freedom. Now matter how powerful the People's Republic of China, it cannot go backward, it has to go along with the world trend. The basic human desire from the birth is that every human being has the right to be free, and not force can stop this. Ultimately the People's Republic of China become a more open society, more democratic institution, with freedom of press. 1.3 billion Chinese people have every right to know the reality. Once they know the reality, they also have the ability is judge what is right and wrong. Therefore censorship on their own people is immoral.

Ann Curry: You can speak to world leaders, you have influence. If there is one thing you can do for your people, what would it be?

His Holiness: Just one word - freedom. Complete freedom, with meaningful autonomy, about matters of religion, culture, and education among others. The defence and foreign affairs are up to the Chinese central government.

Ann Curry: Next month there is going to be a change for China, it will have a new leader, Xi Jinping. How are hopeful?

His Holiness: It is difficult to say. I do not create some kind of speculation. Better wait for six months, one year or two years, then we will see.