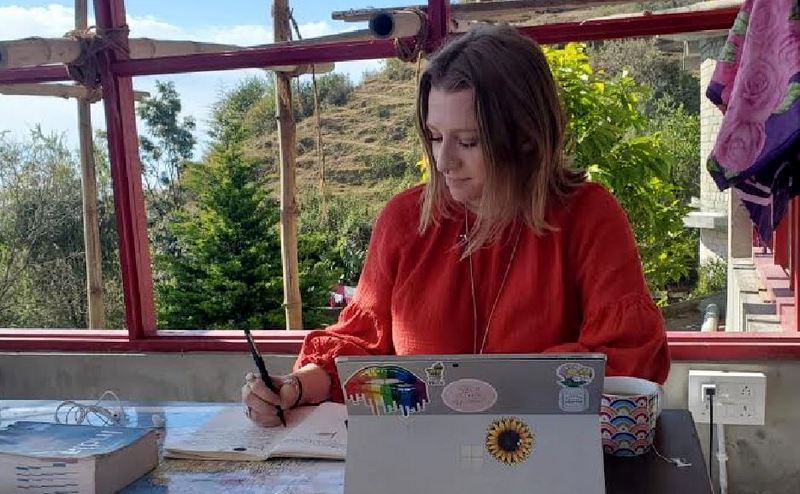 For the last 20 years, in December, students from the University of Denver have arrived in Dharamshala for a fortnight with the hopes of better understanding the Tibetan exiles that have made the city their surrogate home. Vibrantly mounted on the verdant side of the Himalayas, for many foreigners Dharmashala represents the home to a peace-loving, passive Tibetan community.

In the West, popular media often depicts Tibet as a society of tranquil monks adorned in red and yellow robes. Although the Buddhist religion plays a crucial role in the cultural traditions of Tibet, the Tibetan community cannot be defined by one identity and likewise cannot be confined to the stereotype of a mild-tempered monk. Pervasively romanticized, the true suffering of the Tibetan people is neglected in favor of the accepted image of an environmentally friendly, pacifistic community. Westerners too often find refuge in a false image of Tibet while ignoring the great agony of the dislocated people they love to praise.

Because Tibet's cause is largely ignored in the West, very few students taking part in the University of Denver’s Dharamshala programme had prior knowledge of Tibet. In light of this, the experience of living in Dharamshala, even for such a brief period of time has proven significant for many of the visiting students, including myself.

Before arriving in Dharamshala, I was ignorant about the full truth of the Tibetan narrative. During my time here the stories of the individuals who I have spoken with have both enlightened my views on the Tibetan cause and humbled me.

For the service-learning portion of the programme, we were given the opportunity to volunteer with various local organizations. We also visited important Tibetan sites and listened to speakers who helped acquaint us with the community.

Liz, a student with the programme, was one of many who found the experience to be invaluable.“I feel simultaneously humbled and awakened being here in Dharamshala. Although I knew about Tibet and their situation, having such close contact for two weeks has helped me deconstruct the stereotypes about Tibetans. The reality is that they are a people in exile,” she said solemnly. Although Tibetans in exile are united in their ultimate aspiration of returning home and attaining genuine autonomy, she reflected, they do not have only one identity as Westernized stereotypes may suggest.

Liz has been working at the Gamru Village School where several other students also volunteer. “It has been really fun,” she grinned when asked to describe her experience. “The children are so intelligent and polite, and well behaved,” she praised with a gleam in her eye. “It’s so refreshing to see young students so engaged in school”.

She also enjoyed visiting other schools in the area, citing the group trip to the Tibetan Children’s Village School as one of the most personally impactful experiences. “Going to the Tibetan Children’s Village was amazing,” she began reverently. “The fact that they have 16,000 children that live there… It makes you reflect on your own experience. And seeing such a beautiful community able to raise their children with their culture intact, it makes me consider my own culture.”

Liz’s sentiments were echoed in the statements of her colleague Courtnie. She said that through her encounters with the speakers and visits in Dharamshala, her “eyes were opened to what was happening in Tibet.”

She similarly found the Tibetan Village School visit to be heartwarming. To her, it illustrated the admirable ways in which the Tibetan community has survived even in the midst of oppression and exile. She was pleased to learn that the system fostered a family-like atmosphere that continued on after primary school years. It “creates a lifelong Tibetan community for them,” she observed, smiling. “They’ve found a way to hold on to their culture.”

Courtnie also finds great joy in her volunteer work at The Center for Living Buddhist Art. Two years ago, Courtnie was introduced to Tibetan art during an educational programme in New York. She was inspired by the historical nature of thangka paintings there. She is immensely proud that she was able to contribute to the continuation of this endangered practice. She was also glad to help make the tradition “accessible” to people interested in learning about this historic Tibetan custom.

My time in Dharamshala has been spent reflecting on the advantaged position that I have in society. Liz put it best, remarking, “I’ve been recognizing my privilege, but it’s been beautiful.” From my home in the United States, ignorance about disenfranchised groups across the world is everywhere. Citizens have little awareness of the situation in Tibet. Because of this, I believe my time in Dharamshala has put me in a unique position to dispel false narratives spun by Western society about Tibet.

This trip has allowed me to begin to understand some semblance of the intolerable conditions that the Tibetan people have been forced to endure for decades. It is only through this experience that I have been given the opportunity to hear how Tibetan lives are systematically oppressed by the actions of the Chinese government and persistently neglected by the international community.

During my time here, I was introduced to not only the history of Tibet but also the possibility of a future Tibet free from past torment. The gift of knowledge that I have received from the many Tibetan speakers who graced our class and kindhearted friends of the programme is incomparable. I believe that the programme has great potential to benefit both Denver University students and the Tibetan community, who deserves the genuine autonomy that they and their allies abroad so seek.