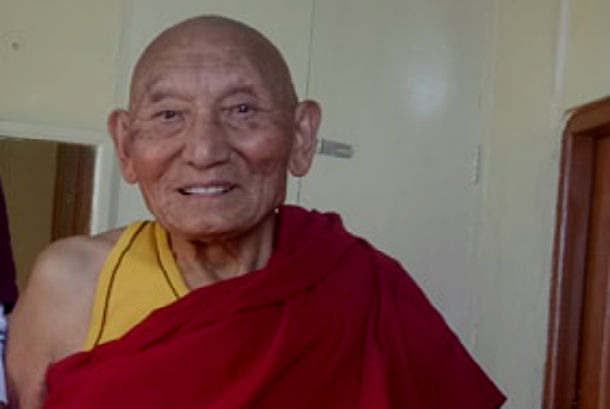 Dharamshala — "Everyone has a history," he said, "and mine is special." Even at 87, Palden Gyatso's piercing, infinitely deep blue eyes and wrinkled hands displayed the history of which he spoke.

It turns out, despite his extensive international activism, Palden Gyatso was not the easiest man to find. I finally found an older Tibetan woman who pointed to a door not 20 feet away. Thinking the resident of the small, sun-filled corner apartment, one I had passed dozens of times in the weeks before without much thought, might know where the man I sought lives, I knocked. The man and his story that my sequence of knocks opened was one for which I had not been prepared.

Every Tibetan living in exile has a story. That is one of the things that I have learned from my work with the large Tibetan community in exile in Dharamshala, India. Home to the Dalai Lama and the Tibetan Government in Exile, Dharamshala is often referred to as "Little Lhasa," the name of the Tibetan capital city. Many Tibetans treacherously trekked through the Himalayas to reach the solace of the city and other parts of India after the Chinese invasion in the 1950s. Since fleeing to India in 1992 after spending 33 years in prison, Palden Gyatso is perhaps the most well-known freedom fighter and political activist other than the Dalai Lama himself.

Born in 1933 in Tibet, Palden Gyatso became a monk at the age of 10. In 1959, at the age of 28, Gyatso was arrested and imprisoned for protesting against Chinese occupation. He had no idea he would imprisoned for the next 33 years. Since 1992 Gyatso has traveled extensively throughout the world to lead protests to highlight the human rights abuses and political oppression in Tibet.

When asked about what lead him to such extensive activism he replied, "I made a promise." He went on to describe an intimate relationship with one of the eight men with whom he had one point shared a cell. The man was begging for water. After being repeatedly denied any by guards, Gyatso, who repeated the motion for me as he told the story, moved his tongue around to produce enough saliva to pass to the man. After being relieved of his thirst the man asked Gyatso to one day, if he survived, "please do something for Tibet." After making this request the man passed away. Gyatso had it in his mind that he would never cease fighting for the freedom and human rights of Tibetans should he ever reach sanctuary. That promise is why he has made a point to travel, tell his story, and bring the world's attention to the cause of Tibet.

At parts of the interview he wept. Often before my translator could tell me what he said I too found myself in tears. His pain, evident by his body language, was of unending depths and needed no translation. He wept out of the pain he endured, the pain he saw inflicted on his friends, and the pain that still exists for many Tibetans. As he spoke I could tell he was reliving a level of suffering no human being I have ever encountered has endured. Honestly, I was glad he did not discuss the specifics of the torture he suffered. Simply looking at him that I knew that I will never truly be able to comprehend or imagine the atrocities his body and soul have bared.

Through these episodes of pain he often laughed and made jokes. By no means had his spirit been broken. His faith in Buddhism has helped him maintain a life of peace and his hope in the younger generation of Tibetans is strong. Inspired by those who are getting educated and taking up the fight for Tibet despite have little or no memory of their homeland, Gyatso feels optimistic that the spirit of Tibet is alive. He recognized that he might not see the day when Tibet is free but has faith in the power in will of the Tibetan people and the new generation.

To achieve freedom, he explained, he advocated for Tibetans, particularly the youth, to appeal to international organizations that seek to promote peace and protect human rights. He believed the legal approach should be taken first as the young will soon be the leaders of the world and change will be possible. Being a monk, he said, "I could never directly advocate for the use of violence." While not endorsing violence he acknowledged, in the fight to take back his country, the last method is to pursue freedom through a more direct means like employing UN peacekeeping forces.

Often as he spoke I found myself angry. I was angry at the Chinese, under whose command his suffering was inflicted. More so I was angry at our global political system, under whose watch the genocide, a word Gyatso felt was accurate, of more than 1.2 million Tibetans has occurred. Though the CIA briefly sponsored a Tibetan rebel program it was discontinued in the 60s as the might of the Chinese was realized and the relationship between the US and China improved. Today, in the context of our globalized world, the cost of sacrificing economic and diplomatic ties with China is a cost to high to bare for most powerful countries. Until we recognize the price of a human life is higher than that of a materialistic lifestyle, Tibetans will continue to suffer.

Gyatso concluded our conversation by stating that "if the world is not a peaceful place, Tibet will not be a peaceful place." Palden Gyatso has experienced the pain of an entire nation and has devoted his life to making sure no other Tibetan be forced to carry a similar burden. His fight for human rights and freedom for Tibetans and all oppressed peoples is a cause we, as members of the international community and as beings capable of inspiring peace-loving forces, should also fight for.