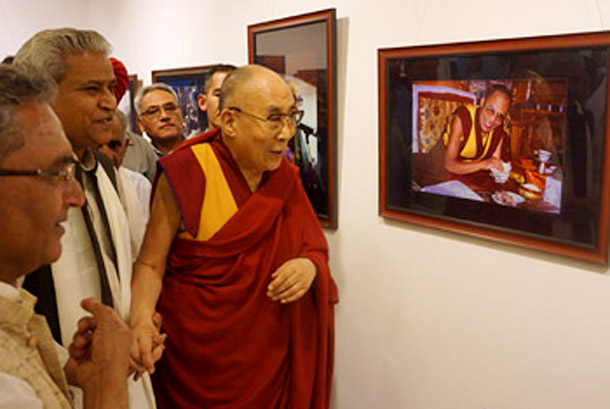 The renowned journalist and Tibetologist Mr Vijay Kranti told the Tibet Post International (TPI) that as the supreme leader of Tibet, HH the Dalai Lama has had many options before him to tackle the Tibetan issue. “Using this right he decided to start with his famous 'five-point' plan that was focused on 'Middle Path'.  Under this five-point plan he offered to the Chinese leaders that he was ready to forego the demand of Tibet's independence provided China offers 'genuine autonomy' to Tibet.”

Mr Kranti told TPI that his views and stand on the controversial issue of ‘Middle Path – Umaylam- Rangzen are abundantly clear to the Tibetan leadership, Tibetan community, Tibetan journalists and Tibet supporters and he has even been affectionately called “Mr Rangzen”.

The Tibetologist said that, “Had it been so perceived by the Tibetan society in general, there was no need of the interpretation or 'misinterpretation' of the 'Middle Path' policy of HH the Dalai Lama which unambiguously implied acceptance of Tibet as a 'part of China' and Tibetans agreeing to live within the bounds of constitution of Peoples Republic of China (PRC). One had only to support it or just disagree with it -- as the 'Rangzen' followers did. But in their over enthusiasm the pro-Autonomy lobby attempted to convert this autonomy-vs-Rangzen divide into 'pro-Dalai Lama' and  'Anti-Dalai-Lama' camps.”

Mr Kranti remarked that, the pro- autonomy lobby was still not satisfied by this that they hijacked the Dalai Lama’s political concept of ‘Middle Path’ and tried to paint it as Lord Buddha’s religious doctrine of ‘Umaylam’. This was to deprive HH the Dalai Lama from probing any other options if this fails.

“Unfortunately some unimaginative utterances by a few individuals from the 'pro-Rangzen' groups only made it easier for their rivals to paint the entire 'Rangzen' movement as blasphamy and 'anti-Dalai Lama'. In my over four decade long association with the Tibetan community I've never seen the society divided so bitterly on any other issue.”

After China’s shocking rejection of this concept Mr Kranti told TPI that an event like this evoked hope that the Tibetan community would find an alternative to the Middle Path and would undo the social divide. “But unfortunately the Tibetan exile community failed to live up to the occasion.”

After these chain of events Mr Kranti told TPI that, “Now that the Chinese government has unequivocally rejected the Dalai Lama's offer of giving up the demand of independence and accepting Tibetan autonomy within the  framework of Chinese constitution, the Tibetan society is left with only two extreme choices of either giving up the Tibetan struggle completely or to win back Tibetan independence viz. 'Rangzen' through any means including violence. In this given situation whether one invokes Lord Buddha's Umaylam or Dalai Lama's Middle Path policy, the only 'Middle-Point' one can reach between these two extremes is to strive for Tibetan independence through peaceful means.

This choice is surely going to look very difficult or even 'impossible' to those who have been hoping for an easy and immediate 'solution' of the Tibetan problem by complete surrender of Tibet's independent personality into the sea of Chinese geography and constitution. They might try to reject it simply because this approach may require to wait for much longer time than the span of their personal life. But we have examples like India and Israel who lost their freedom and had to wait for centuries to see the dawn of their 'Rangzen'."

Mr Kranti’s views indulge in the view that the Middle Path seems difficult or even impossible to those who have been hoping for an easy and immediate solution of the Tibetan problem by the complete surrender of Tibet’s independent personality. He also adds, “A sympathizer like me would like to respectfully ask these proponents of quickie solutions a simple question: “How intelligent it is for a nation to lose one thing (viz. Rangzen) and fight for an altogether different thing (viz. Autonomy)?”

My experience in Dharamshala, interning with the TPI, I think those who have understood the Middle-Way Approach correctly have recognized it’s latent potential. In recent years voices have been raised regarding the same, the US, European Union and even many Chinese scholars are included in these voices. Misunderstandings regarding what the Middle Way Approach stands for are a result of Chinese government propaganda. While the spiritual leader of Tibet has frequently asserted that separation and independence is not the purpose, instead he wants genuine autonomy.

The views and opinions expressed in this article are those of the interviewee and author and do not necessarily reflects the editorial policy of The Tibet Post International.

Tahhira Somal is a 1st year BA at Jindal School of International Affairs, O.P Jindal Global University. She currently interns at the Tibet Post International. You can reach her at This email address is being protected from spambots. You need JavaScript enabled to view it.