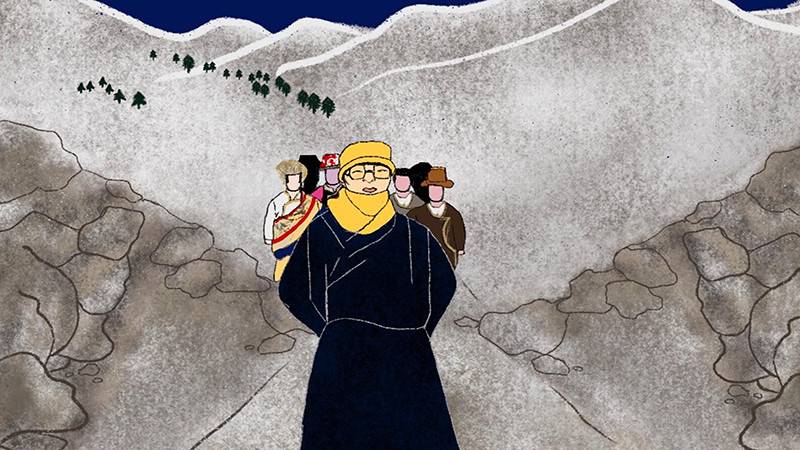 His Holiness the Dalai Lama and Tibetans crossing the Himalayas in 1959. Representative image: Meghana Nair

According to data by United Nations High Commissioner for Refugees, 27.1 million people across the globe are refugees. World Refugee Day, observed every year by the United Nations on June 20, is a day to commemorate the strength and courage of the refugees worldwide. They are people who live through harsh circumstances, having been forced to flee their home country because of conflict, war, persecution or terror.

Refugees fortunate enough to have access to resources, made their way up in different fields like science, psychology, music, films, literature, sports and so on. Bob Marley, Freddie Mercury, Sigmund Freud, Victor Hugo, Fritz Lang, Albert Einstein, and the Dalai Lama are among the well-known refugees around the globe.

Amidst the refugee crisis that plagues the world today, the plight of Tibetan refugees should not leave sight. Forced Chinese occupation of Tibet in the 50s, led to immense suffering of Tibetans forcing many of them to flee their homeland and seek refuge in the neighboring countries of India, Nepal and Bhutan. But why and how were they forced out of their homeland where they once lived harmoniously?

In the context of the current global refugee crisis, the plight of Tibetan refugees should not be lost sight of. The forced occupation of Tibet by China in the 1950s caused immense suffering to Tibetans, forcing many to flee their country and seek refuge in neighbouring India, Nepal and Bhutan. But why and how were they forced to leave their homeland where they once lived in harmony?

The forced occupation of Tibet by China

His Holiness the 14th Dalai Lama took power in Tibet in 1950. Due to isolation, lack of support for Tibet from the international community and the imminent threat of a prolonged invasion of the Tibetan capital of Lhasa by the Chinese People's Liberation Army (PLA), the 17-point agreement was signed under threat from the Chinese government. Later, in March 1959, a Tibetan national uprising took place, in which thousands of Tibetans from all three provinces (U-Tsang, Kham, Amdo) gathered to demand Tibetan independence. Violence followed and the uprising was harshly repressed, with many casualties. His Holiness the Dalai Lama along with 80,000 Tibetan escaped from their homeland. Then Indian Prime Minister, Jawaharlal Nehru, granted asylum to His Holiness in India.

Many Tibetans had followed the footsteps of His Holiness and sought refuge in India. The onerous journey to India was mentally and physically vexing. Most of them had to leave behind their homes, loved ones and possessions they once deeply cherished. In a land foreign to them, Tibetan refugees felt alone in their struggle. They had no money or shelter. Many lived in refugee camps and got themselves involved in road construction work with very little pay. With longingness for their homeland lingering in their hearts, the only thing many refugees found a semblance to their native land was the sky and the soil.

The Tibetan people, both in and outside Tibet, look to the CTA as their sole and legitimate representative. This and the administration’s commitment to truth, non-violence and genuine democracy as its inviolable principles mean that it is now being recognised increasingly by parliaments and general public round the world as the legitimate and authentic representative of the Tibetan people.

Tibetan Refugees around the world

The cultural genocide of Tibetans who were denied the freedom to practice their religion, culture and assertion of their identity, made them escape and settle in neighboring countries of India, Nepal and Bhutan. Their migration continues even today as Tibetans are tortured by the CCP. The Tibetan diaspora is also found in the United States of America, Canada, the United Kingdom, Switzerland, Norway, France, Taiwan and Australia. The Tibetan exile population numbers over 130,000, of which 80,000 are based in India.

After escaping from Tibet, crossed the rugged terrain and faced the brutal cold of the Himalayas to seek refuge in India. Over these years, His Holiness the Dalai Lama, who came in India as a refugee, became the face of the Tibetan cause and worked to gain international support for his homeland, Tibet. His Holiness the 14th Dalai Lama was only 15 years old when he took over the reins of power in Tibet. Charged with heavy responsibilities at such a young age, he had to make the tough choice of leaving his homeland behind and seeking refuge into India. The escape of His Holiness from Tibet marked the start of a new era in Tibetan History. With the influence of His Holiness who has always advocated for non-violence and peace, the cause and issue of Tibetan has been brought to light on the international stage.

Over the past 60 years, Tibetan refugees have lived in different parts of India and, with the support of the Indian government, Tibetans have been able to revive and practice their rich heritage, culture and religion, which were and continue to be suppressed by the Chinese in their homeland. His Holiness and the Tibetan refugee community have repeatedly expressed their desire and aspiration to return to their homeland, the land of snow.

World Refugee Day 2022 is about treating refugees with dignity whoever they may be. Wherever they might be from, they should be welcomed and protected whenever they are forced to flee their home country under any circumstance because everyone has the right to seek safety. This World Refugee Day, we remember and honor the struggle of Tibetans for freedom of their native land which has been going on for more than six decades.