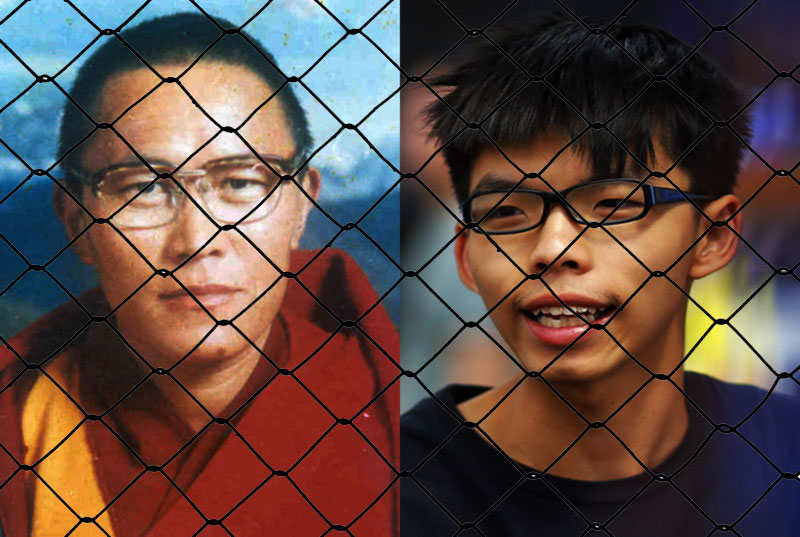 Dharamshala — The deteriorating situation in Hong Kong sends a strong diplomatic signal to the international community that there's no future for people who worship the "one country, two systems" framework. Beijing has failed to adhere to the rule of law by denying ethno-religious minorities the rights and freedoms originally promised. Hong Kong people reacted with shock but little surprise to China's decision to bar a British activist and vocal critic of human-rights abuses in China.

Benedict Rogers, a prominent British activist and vocal critic of human-rights abuses in China and south-east Asia, was blocked from entry into the former British colony on Wednesday, October 12, 2017. The arrest sends a strong signal that Beijing will continue to tighten control over the Island City. 'If China is now in control of Hong Kong immigration, it means that the idea of Hong Kong people running Hong Kong is dead, and if China decides to deny entry to Hong Kong to a person simply for wanting to meet people who have a range of political views, it means the basic rights of freedom of expression and freedom of association are undermined,' says Rogers after he was barred from entering the city.

When Britain handed over control to China in 1997, Hong Kong was a beacon of freewheeling prosperity – but in recent years Beijing's grip has tightened. Is there any hope for the city's radical pro-democracy movement? One country, two systems was meant to allow Hong Kong to remain a vibrant and unique place in the world.

China has rebuffed criticism of its decision to bar a prominent British activist from Hong Kong, declaring itself unshakably opposed to foreign interference in the former colony's affairs. Speaking a day after the Conservative human rights campaigner Benedict Rogers was refused entry to the financial hub, Hua Chunying, a spokesperson for China's foreign ministry, said decisions about who was allowed to enter were a matter of Chinese sovereignty.

Fiona Bruce MP, Chair of the Conservative Party Human Rights Commission Chair, has today made the following statement, after Benedict Rogers, Vice-Chair of the Commission, was denied entry to Hong Kong by Chinese authorities: 'It is extremely disturbing that Ben Rogers has been refused entry to Hong Kong, after he gave a detailed and specific statement several days ago that his proposed visit would be an entirely private visit, where he would be meeting old friends and personal contacts, having lived in Hong Kong for five years previously, and after he undertook not to do any media or public engagements whilst there.

'I have today raised my grave concerns about this incident with the responsible Minister at the Foreign and Commonwealth Office and sought an assurance that he will take appropriate action to address these concerns with the relevant Chinese authorities as a matter of urgency,' he added.

"This is another audacious blow to Hong Kong's autonomy. I am shocked and saddened that the Chinese government is warning foreigners about who they can meet in Hong Kong and then openly admitting complicity in barring Benedict Rogers from entry to the city," said US Congressman Chris Smith, Chair of the bipartisan Congressional-Executive Commission on China, About Benedict Rogers Being Denied Entry Into Hong Kong.

Protests erupted during Chief Executive Carrie Lam's Q&A session at the legislature on Thursday over labour and welfare issues, education, as well as Hong Kong's autonomy. Pro-democracy lawmakers did not chant slogans as they did on Wednesday, when Lam read out parts of her first policy address. "Long Hair" Leung Kwok-hung of the League of Social Democrats, heckled Lam as she entered the chamber. Leung was one of the six lawmakers disqualified by a court after a government legal bid to oust him – however, he returned to the public gallery at the Legislative Council as a private citizen.

After the 2014 Occupy Central protest movement — several popularly elected Hong Kong lawmakers known as pro-democracy lawmakers" were removed from the territory's parliament recently in a move that will worsen growing fears the city's freedoms are under serious threat from Beijing. Former Umbrella Movement protest leader Nathan Law was among the group barred by the High Court judgement in a case brought by the city's Beijing-friendly government.

According to reports, the incident was yet another blow to the idea that Hong Kong has control over its own affairs. Just a year earlier, five publishers and booksellers had been secretly whisked away to China for interrogation. From unknown places of detention, where most of them remain, some were forced to make crude televised confessions.

As Hong Kong marked the 20th anniversary since its return to Chinese sovereignty with a blow-out US $80m celebration, its government has stepped up its campaign to oust localist politicians critical of the government from the legislature. This follows China's intervention in a court case regarding the oath-taking in November by interpreting Hong Kong's mini-constitution, the Basic Law.

Although Hong Kong's Basic Law guarantees it a "high degree of autonomy" for 50 years after its return to Chinese sovereignty, Beijing is making it clear — through actions and rhetoric — that it will take whatever action it deems necessary to impose its will on the territory. It is very clear that "One China Two System" has no future, —is now drawing parallels with Beijing's treatment of other restive regions such as Tibet, East Turkistan and South Mongolia.

The Conservative Party Human Rights Commission report, entitled: "The Darkest Moment: The Crackdown on Human Rights in China 2013-2016" which launched in Westminster last year, documents what it says is an "unprecedented" crackdown on freedom.

China has intensified control over Tibetan peoples movements by denying and recalling passports in contravention of Chinese law, and connected to the Chinese authorities' political agenda of undermining His Holiness the Dalai Lama and seeking to assert their control over Tibetan people. The updated version of rules put in place in 2005 passed by the Chinese government recently should be assessed against the background of a series of laws that can be viewed as a systematic development of a security architecture. The revised regulations on religious affairs passed by the State Council this week intensify controls over religious activity and present a further threat to Tibetan Buddhists.

Among those are the 2015 Security Law, the NGO Law (in force January 2017), the 2016 Counter Terrorism Law, and the Cyber Security Law (in force May 2017). These laws represent the Chinese Communist Party's will to gain maximum control over every aspect of people's lives. While announcing the passage of the regulations, the official Chinese media said: "The regulation prohibits the use of religion as a tool to sabotage national security, social order or China's education system, or to damage ethnic unity or carry out terrorist activities."

This reflects China's intention to add ideas and notions of "state security", "religious extremism" and "terrorism" to the law, thereby linking religious activity directly to politically charged crimes. Thus, in conflating the law with these, the regulation will give scope for the penalization of almost any peaceful expression of Tibetan identity, acts of non-violent dissent, or criticism of ethnic or religious policies.

China has already been clamping down on normal Tibetan religious activities by maintaining that these are separatists or that they disrupt social order. This regulation will lead to an even more repressive situation — particularly in Tibet — that violates international human rights standards. Given the far-reaching scope of the restrictions stated in the updated rules, the international community, United Nations bodies, governments and parliaments, must urge the Chinese government to bring this unacceptable legislation into conformity with international human rights standards.

Tibet was invaded by Communist China in 1949. Since that time, over 1.2 million out of only 6 million total Tibetans have been killed, over 6000 monasteries have been destroyed and acts of murder, rape, arbitrary imprisonment, torture, and cruel, inhuman and degrading treatment have been inflicted on the Tibetans inside Tibet. Beijing continues to call this a 'peaceful liberation,' and claims that the 'Tibetans are living in a Maoist socialist paradise.'