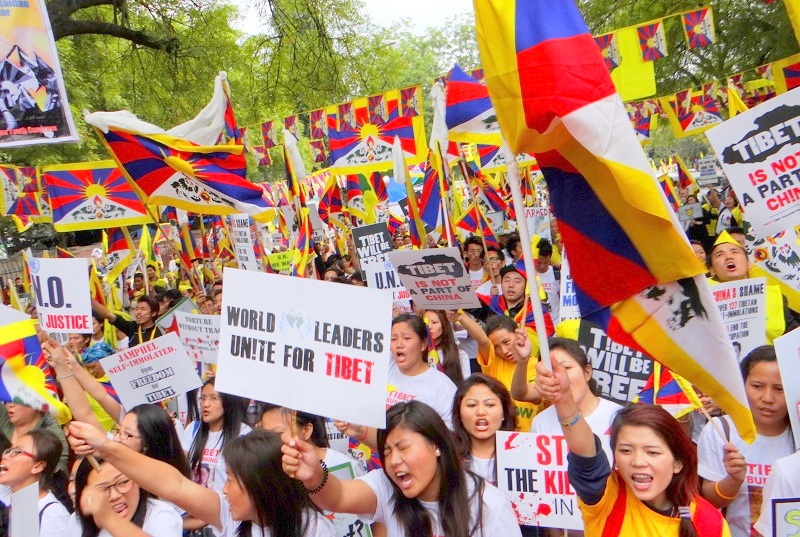 Hundreds of Tibetans and Indian supporters protesting at the Jantar Mantar in New Delhi on the 55th Tibetan National Uprising Day on March 10, 2014. Photo: TPI/Yeshe Choesang

Dharamshala: - Many argue that there are two important reasons for China to invade Tibet: The first being the ability to access the vast amount of natural resources from the Himalayan region. The second is to have a buffer of land separating China from every possible threat.

Although many people still struggle with these reasons they also do not understand why China is not treating Tibetans in Tibet as they do the Chinese in China. Recent historical facts show how the Chinese regime tries to erase the Tibetan cultural identity. Does China see the Tibetan religion and culture as the main threat to the leadership of the Communist Party?

Tibetan people may find it difficult to keep the international community interested in their freedom cause. A couple of weeks ago we witnessed another Tibetan man, who set himself on fire to protest at China’s repression of Tibet. China occupied Tibet in the 1940's and still considers itself a liberator of Tibet. China’s colonization of Tibet was hastened by railways which brought an influx of settlers and bolstered the architecture of political and military control.

Many world experts however question the new Chinese leadership led by President Xi Jinping about the current policy on Tibet. Is it a threat to the image of China or are they really leading their campaign on the right footing as per the wishes of the 1.3 billion Chinese?

China’s practice of colonialism is the greatest threat to its credibility and ultimately its continuity in Tibet. Colonialism is not limited to physical boundaries, theft of resources or even military aggression. In fact, it extends far beyond what we see, hear, and touch to what we do not. And the latter is equally perilous to say the least.

It seems that colonial powers present the colonized not only with the illusion of the so-called "one country, two systems," prosperous economy, and social justice, but also with an ever-imposing dictionary of words and world map of lines that slowly becomes entrenched in their daily interactions and systems of thought. Domestic colonizers, i.e. the local beneficiaries of colonialism such as politicians, government officials and businessmen, are usually the first to adopt such dictionaries, maps and all official documents.

The regime in Tibet offers itself as a stunning example through a series of behaviours and generalizations that have become the 'norm' to the extent that it is becoming smaller not only physically and geographically, but also in the language and mentality of the Tibetan people.

Recently, the office of His Holiness the Dalai Lama appealed to Tibetans, particularly Tibetan journalists to practice their own standard lingo, including cities and towns in cultural Tibet, when they are reporting or broadcasting, instead of using Chinese lingo.

During the Chinese occupation, thousands of Tibetan towns and cultural landmarks were not only destroyed but also renamed with Chinese names. This is a tiny example of how China is trying to convert Tibetans into Chinese, forcing by territorial division and restricting or surpassing the use of the Tibetan culture and language.

To stop this ongoing attempt to systematically wipe out the Tibetan identity, language and culture we must tell ourselves and the world, by asking China and top search engines, including Google and Yahoo to put Tibet and it’s heritage back on the map. We must tell them that they might censor the voice of the people, but they can't censor their mind and heart.

It's not too late to change our way of life through an environment of mutual trust and respect, but, this instance shows the implications that eventually come with a decades-long occupation designed to create mentalities that intentionally act, determined, and react, China has done everything possible to wipe out the Tibetan identity.

China's psychological violence is inherent both in its discriminatory policies, and physical establishments. The geographical division between Tibet Autonomous Region (TAR) on the one hand and the Kham and Amdho territories seized roughly half of Tibet (modern-day Qinghai, Gansu, Sichuan and Yunnan) on the other, is traditionally manifested in east and north-eastern Tibet.  In recent years too many Chinese checkpoints are monitored by a huge military presence and watchtowers in north-east Tibet to prevent Tibetans from both sides to making it to the other side. This still provides live evidence of an occupation and colonialisation.

TAR is off limits to the Tibetans on either side. China's segregation and fragmentation of the Tibetan people through checkpoints finds clear reflections in the language and psychology of those affected by it. This external geographical disconnection has become so internalized that many Tibetans, when asked to introduce themselves including the names of their province, district, town or village where they are from, give Qinghai, or Gansu, or Sichuan and Yunnan as their reply; as if each were a right answer or politically motivated.

TAR Tibetan residents are constantly forced to treat their fellow Tibetans from Kham and Amdho regions as if it indeed were a separate county or province. This becomes evident when a 2149km drive from Dhartsedho to Lhasa, takes more than 4-5-days, 44 hours by train covering approximately 3,360kms and it takes 2 hours by air with 1334kms.

Dhartsedho town (Chinese: Kangding) that historically belonged to the Tibetan province of Kham, was a border town between China and Tibet, known for its trade—Chinese would bring brick tea from Chengdu to trade with Tibetans for wool.

People can easily cross from territory to territory, except Tibet and Eastern Turkestan, because, all people living in these regions are Chinese. There are no gates or x-ray machines, and not a single soldier or official is seen until the very end. The situation in Tibet is completely the opposite and this cannot be a coincidence. Indeed, the entire architecture of having Chinese soldiers or officials look down on you through windows or roofs of buildings in the Tibetan areas, is specifically designed to tell you that while you are 'down' and 'exposed,' they are 'up,' 'unexposed' and probably pointing their guns at you. There are countless incidents when Tibetans, including respected monks and nuns, were forced to strip down to their every belongings for no apparent reason.

The feeling of vulnerability that sweeps one's body and brain while in Tibet, particularly in Capital Lhasa is unfathomable. Lhasa does not strip Tibetans of their clothes or face only, but of their self-confidence for being a Tibetan as well. No matter how hard one tries to assure him or herself, he/she will still have to feel as though something was wrong with them. One begins to think hysterically about possible scenarios that might befall them and is filled up with complacency if nothing occurs. Psychologically, the brain forgets the torment it had to go through by simply moving through the procedures.

China's systematic violation of brain dynamics, has led to increased alienation on the part of many Tibetans who were forced to grow up under Tibet's education system, controlled entirely by the Chinese. Many young people, especially those who live or study inside China or abroad, can refer to this problem as an 'identity crisis.'  Notably, one can barely find a Tibetan with another citizenship writing or tweeting in any language other than Tibetan. These meaningful forms of preserving the Tibetan identity are becoming increasingly prevalent among young Tibetans all over historical Tibet, despite the systematic repression.

A Kenyan writer Ng?g? wa Thiong'o a highly-regarded intellectual, dubs such behaviours as a "cultural bomb" and in his book, Decolonizing the Mind: The Politics of Language and African Literature, he argues that the effect of a cultural bomb is to "annihilate a people's belief in their names, in their languages, in their environment, in their heritage of struggle, in their unity, in their capacities and ultimately in themselves."

One does not need to think twice to figure that China is following the exact divide-and-rule colonialist principle that was previously implemented in Latin America and all over Africa.

China is restless in its attempts to maintain the Tibetan internal rift while at the same time working hard to lure as many Tibetans as possible into its revolution-making illusion and shining economy. The Tibetan culture continues to be branded as barbaric and any kind of resistance, be it armed or unarmed, is quickly discredited as uncivilized acts carried out by savages with the aim of "splitting up the motherland and disturbing social order.”

Linguistically, the term colonization is constantly and unjustly reduced to apply to the Tibetan areas in Qinghai, Gansu, Sichuan and Yunnan. There are a number issues surrounding the culture of Tibet. One of the priority issues of Tibetans is regaining their status as a Tibetan speaking nation. This is by far the most volatile topic concerning Tibet, one that has deep roots that extend through both the political and historical facts.

Whenever the Tibetans attempt to think outside the box, China sends a harsh reminder to drag them down to their "designated" area. However, one must realize that Chinese colonialism is only a fraction of worldwide imperialist powers that continue to produce human suffering all over the world.

This article is dedicated to the memory of the 1.2 million Tibetans, including 126 self-immolators who have sacrificed their lives to protect Tibetan freedom and cultural identity and towards the hard work of Tibet supporters all over the world.