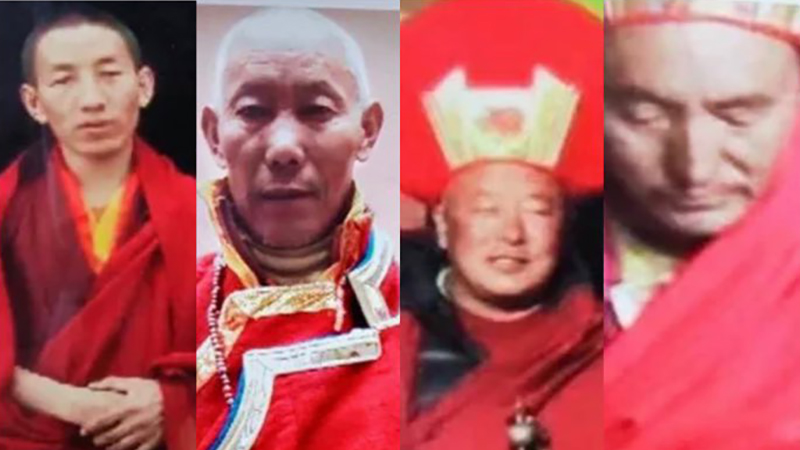 Dharamshala, India — Four Tibetan monks from Tengdro Monastery in Dingri County, Tibet, were arrested and imprisoned for 5 to 20 years for possessing cultural material, photos or literature related to His Holiness the Dalai Lama on social media and providing humanitarian aid to the Tibetan diaspora.

A report released by the Human Rights Watch (HRW) on July 6, 2021, gives detailed information on these events and the backstory that perpetuated them. "This report provides the first detailed account of the raid on the Tengdro monastery and its consequences, including multiple detentions and a suicide, that has appeared in any media within or outside China," said the HRW.

In September 2020, the four monks were reportedly tried in secret on unknown charges. The four monks, Choegyal Wangpo (46), the deputy head of the monastery, Lobsang Jinpa (43), Ngawang Yeshe (36), and the monastery's caretaker, Norbu Dondrub (64), were sentenced to 20, 19, 17, and 5 years in prison, respectively, by the Shigatse City Intermediate People's court.

Additionally, another 20 monks were detained. "Sources told Human Rights Watch that most of the 20 monks detained in or just after the raid, including monks Ngawang Samten, 50, Lobsang, 36, and Nyima Tenzin, 43, were held without trial for several months in the nearby Tingri county town. These detainees are believed to have been released after making pledges not to carry out any political acts, but were not allowed to rejoin the monastery," said the HRW.

There is a rather unfair background to these accidents that begins with a cell phone, which was mistakenly forgotten in a Cafe in Lhasa by monk Choegyal Wangpo. The lost phone was handed over to the police authorities by the Cafe owner. The police searched through it and found conversational exchanges between Choegyal Wangpo and a few Tibetans from Tingri but now living in Nepal. They had set up a monastery there. The messages reveal that the monk was trying to help fellow Tibetans and their community to recover from the well-known and devastative Nepal earthquake of 2015 by sending some donations from the Tengdro monastery.

On finding out that the phone belonged to monk Choegyal Wangpo, the Lhasa police detained him immediately. It has been reported that he was treated harshly, interrogated, and beaten severely.

The Chinese police and security forces raided Choegyal Wangpo's home in his village along with the Tengdro monastery. At that time, the aforementioned additional 20 monks were detained on the grounds of exchanging messages with Tibetans living abroad, sending earthquake relief to a sister monastery in Nepal, possessing cultural material, photographs, or literature related to His Holiness the Dalai Lama.

The Chinese authorities began interrogating the Tengdro monks relentlessly. A team of cadres contained government officials or Chinese Communist Party officials deliberately started organizing political education sessions for the monks of the monastery and residents of the village. As an apparent mark of protest against the authorities for the unfair treatment of his family and community members, monk Lobsang Zoepa committed suicide. Soon after the suicide, the village's internet connections were cut off.

"In this case, no reports have come to light indicating any political or dissident activity by the monks apart from routine misdemeanors, such as possessing pictures of the Dalai Lama on their phones and exchanging messages with Tibetans overseas, with no indication of any purpose considered subversive," reported HRW.

"The information available about the Tengdro case strongly suggests that the defendants had not taken part in any significant criminal activity, even as defined within Chinese law. While Tibetans in Tibet often avoid making politically sensitive remarks, they routinely communicate with people in other countries by phone or text message, and no Chinese laws currently forbid this. Sending funds abroad, also present in this case, is likely to be monitored but is not illegal in China unless it includes a specific offense such as fraud, contact with an illegal organization, encouraging separatism, or espionage, none of which appear to have been involved in this case," HRW added proving the extent of the declared punishment unjustifiable. "Even if authorities had considered the monks guilty of such offenses, the harsh sentences would be unprecedented," HRW said further.