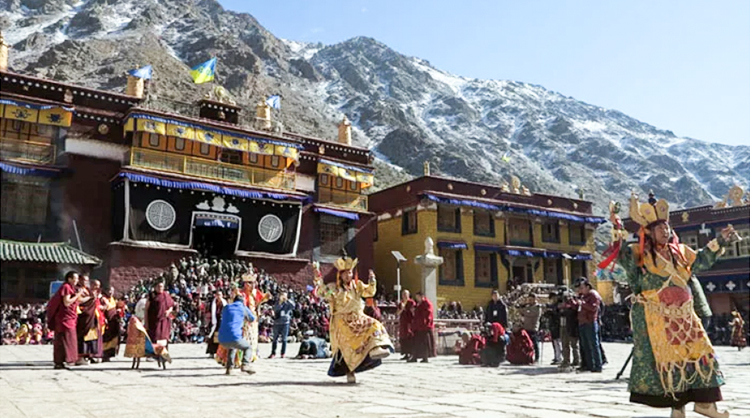 Dharamshala, India — Chinese authorities in Lhasa, Tibet's capital, have issued a notice restricting religious practices during the holy fourth month of the Tibetan calendar, which started on May 12, 2021.

The Lhasa City Buddhist Association has issued a notice dated May 9, 2021, told Tibetan Buddhists in the Tibetan capital to restrict their traditional religious practice during the holy fourth month of the Tibetan calendar.

According to Tibetan Buddhist beliefs, the holy fourth month, known in Tibetan as “Saga Dawa,” is when the Buddha was born, became enlightened, and passed away. Buddhists consider it a month to perform virtuous actions, including religious practice. Traditionally, Tibetan Buddhists would go on daily circumambulations and pilgrimages to religious centers.

"The notice states the reason as the “very significant” risk of contracting and spreading COVID-19, given the situation in “some neighboring countries” and “imported cases” continuing to appear in China itself. However, these warnings have come even though the Chinese government has not stopped Chinese tourists from visiting Tibet—which China has illegally ruled for more than 60 years—and has in fact boasted of a surge in tourism during the pandemic," said the International Campaign for Tibet(ICT).

The Lhasa City circular makes a four-point “proposal” that urges:

-Tibetans to adopt the “correct view” on religion and not go for the “Lingkor,” which is the most prominent circumambulation route.
-Monks and nuns to take COVID-prevention actions and do some planting to beautify the environment around their monasteries.
-General tourists to be “well-behaved tourists.”
-Monasteries to responsibly uphold harmony and stability and undertake the approach adopted by the Chinese Communist Party and the government on pandemic prevention.

While the announcement does not out rightly ban religious practice during this period, the implication is that engaging in religious rituals will impact the pandemic situation in Lhasa.

“Tourism, this reasoning is contradictory to the authorities’ claim that there have been no COVID-positive cases not just in Lhasa but throughout the Tibet Autonomous Region, other than one found and treated in early 2020. The TAR spans about half of Tibet,” said the ICT.

“The reference to possible imported cases emerging makes sense given that the authorities have not stopped any Chinese tourists from coming to Lhasa and other Tibetan areas. So far, COVID variants have been found in major Chinese cities,” mentioned the ICT.

"The state media outlet Xinhua reported on May 7, that despite the COVID-19 pandemic, the number of tourists traveling to the TAR “surged in the first quarter of this year compared with the same period of 2019, with tourists arriving by train up 20 percent and those arriving by air up 28 percent, regional data shows,” ICT added.

"In fact, during the May 1 holiday period alone, TAR authorities said they received a total of 706,700 tourists. In past years, the Chinese authorities have imposed restrictions on Tibetan Buddhists’ religious activities during this holy month," the ICT said.

"China has also spent decades severely violating Tibetans’ religious freedom, including by interfering in the selection of Tibetan Buddhist leaders, installing police stations inside monasteries, and arresting ordinary Tibetans simply for owning photos of the Dalai Lama," it concluded.