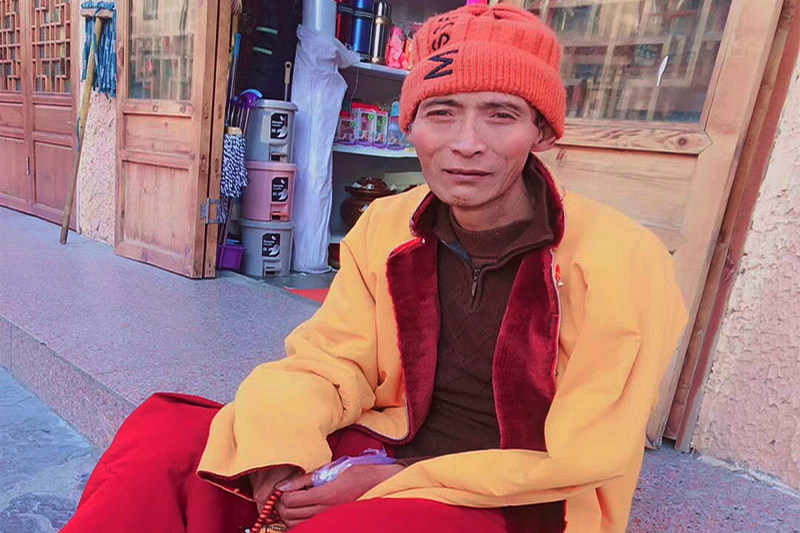 Dharamshala, India — Tashi Phuntsok, a senior disciple of Tulku Tenzin Delek Rinpoche, one of Tibet's most high profile political prisoners, passed away March 16, 2020, most probably after prolonged illness and imprisonment. He was 60.

The former political prisoner named Tashi Phuntsok, 60, a senior disciple of Tenzin Delek Rinpoche known as a Tibetan environmental defender has died on March 16, 2020. Ven Tsedor, another senior disciple of Tenzin Delek Rinpoche, currently living in India told the TPI that his health had been poor ever since his release from Yakra Phuk prison in July 2003.

"The thing is we got to know each other when we were very young. We then have worked together for the monastic community for a long time under the guidance of Tenzin Delek Rinpoche after he returned from India," Ven Tsedor added.

Phuntsok was sentenced by the Chinese authorities, alongside Tulku Tenzin Delek Rinpoche in 2002, and was released early in July 2003 due to his deteriorating health in poor prison conditions.

Phuntsok was arrested by Chinese authorities from his monastery, Jamyang Choekhorling Monastery in Nyachukha (Ch: Nyakchukha, Sichuan Province)in eastern Tibet in April 2002 after he was falsely accused of colluding with Tenzin Delek Rinpoche in trumped-up charges of involvement in a series of bomb explosions.

The so-called Karze People’s Intermediate Court sentenced Phuntsok to seven years’ imprisonment after a sham trial, in November 2002, over alleged charges of colluding with Tenzin Delek Rinpoche, while the latter, a prominent Tibetan monk was given a suspended death sentence in December 2002 for “causing explosions” and “inciting separation of the state”.

At the time of Phuntsok’s arrest, he was said to be in a serious health condition and suffering from tuberculosis. His health deteriorated while he was serving his seven-year imprisonment, apparently as a result of ill-treatment or lack of proper medical care in prison. The monk then was released prematurely from the Yakra Phuk prison near Dartsedo County (Ch: Kangding, Sichuan Province), in eastern Tibet later in July 2003, due to his deteriorating health as the the Chinese authorities feared the monk might die under their watch.

He also touched the souls of many Tibetans and supporters across the world, and their reactions of shock, sadness, and prayers for Phuntsok pour in following news of his death. Hundreds of monks gathered for chanting prayers and performing religious rituals in their assembly hall at the Drepung Gomang Hardhong Washul Metsen in South India, on Monday, the day he died.