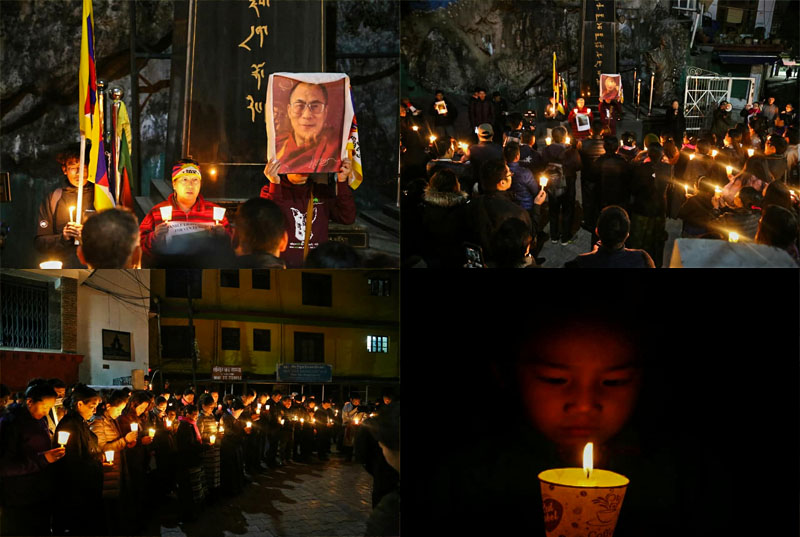 Dharamshala — Tibetans in exile gathered India's northern Dharamshala town for a candle light vigil and a prayer session to express their heartfelt solidarity with Tibetan monk, who self immolated protesting the People's Republic of China's repressive rule in occupied Tibet.

Dharamshala — Tibetans in exile gathered India's northern Dharamshala town for a candle light vigil and a prayer session to express their heartfelt solidarity with Tibetan monk, who self immolated protesting the People's Republic of China's repressive rule in occupied Tibet.

The candlelight vigil was organised on Wednesday, where Buddhist monks, exiled Tibetans and Tibet supporters gathered in large numbers to mourn and express solidarity with all those Tibetans who have self-immolated for the cause of Tibet. The vigil was organised by Tibetan Women's Association, Regional Tibetan Youth Congress and Students for a Free Tibet.

The Central Tibetan Administration (CTA) also held a prayer service on Saturday for the Buddhist monk who died after burning himself in protest against the Chinese government on November 26 in eastern Tibet. The prayer service was held the main temple in Dharamshala and attended by top officials and staff of the CTA along with local Tibetan public.

Tenga, 63, set fire to himself to death on November 26, 2017, Karze County of eastern Tibet. He died of severe burn injuries after setting himself on fire, in protest against China's heavy-handed controls on people of Tibet. Chinese police swiftly arrived at the scene and extinguished the flames and took away the body.

Tenga is the fifth Tibetan to carry out a self-immolation protest in 2017. The last self-immolation in Tibet was carried out by Jamyang Losel, in Chengtsa County of northeastern Tibet, on May 18, 2017. The source said the elderly Buddhist monk also shouted slogans such as "Tibet wants freedom" while he burned. Both of his parents passed away when he was young.

The latest self-immolation by Tenga brought the total verified number of self-immolations inside Tibet to 150. Of these, 126 are known to have died while the status of the rest remains unknown. Most of the self-immolators called for the return of His Holiness the Dalai Lama and freedom in Tibet.

The President also highlighted the growing international attention on the situation inside Tibet, citing the coverage of the latest self-immolation protest in leading international dailies and the discussion on status of Tibetan political prisoners in the Canadian parliament, according to the Central Tibetan Administration.

"The Canadian senate recently raised the issue of five Tibetan political prisoners including the status of Panchen Rinpoche. The Canadian foreign minister also stated in the parliament that China should allow human rights activists and UN officials to meet the Panchen Lama who has been forcibly kidnapped since the age of six. The United Nations has also released a report on the situation inside Tibet based on five urgent researches conducted between February and August this year," he said, and urged the international community to do more to alleviate the sufferings of the Tibetan people inside Tibet.

President Dr Sangay also underlined non-violence as the principal approach undertaken by the Tibetan people in their struggle for freedom including the self-immolaters. "At least 150 people have set themselves on fire in protest since 2009. However, not even a single person has resorted to violence or attempted to hurt someone while staging their protest. This is something that the world should know," he said.

Dr Sangay further urged Chinese president Xi Jinping to reform China's failed policies in Tibet in his second term, and said that repressive, hard line policies will never work, but rather they should address the genuine grievances of the Tibetan people to resolve the Tibet issue.

Tibet was invaded by the Communist regime in China, starting in 1949. Since that time, over 1.2 million out of 6 Tibetans died as a direct result of China's invasion and continued occupation of Tibet, over 6000 monasteries have been looted and destroyed. The communist regime continues to claim this a 'peaceful liberation', that the "Tibetans are living in a Maoist socialist paradise."