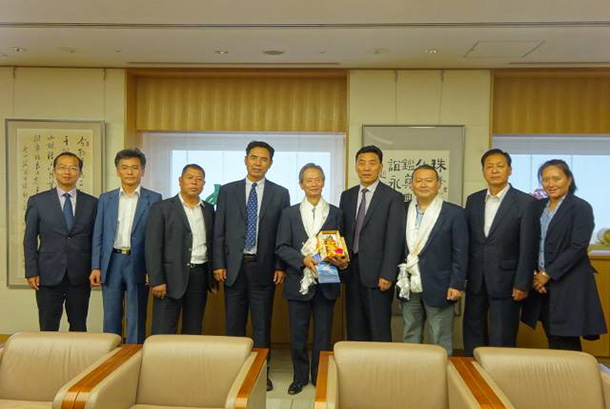 Tokyo — A group of the Chinese Communist party puppets from Tibet recently visited Japan and called upon Japan to "properly handle Tibet-related issues" during their meetings with the Japanese officials. They also reportedly held seminars with Japanese scholars and overseas Chinese in Japan during the visit.

It is not the first time that a group of Chinese puppets from Tibet who have made such outrageous claims on Tibet during their meetings with foreign officials. A group of communist party puppets from Tibet visited the United States and The group told the U.S. officials that Tibet has always been part of China, and there is no basis for "Tibet issue." during their official week-long visit to US, started from April 19, 2016.

The Chinese state-controlled news media "Xinhua" reported that "a Tibetan delegation of the National People's Congress (NPC) of China has informed Japanese officials and friendly groups about the current situation in Tibet and called upon Japan to properly handle Tibet-related issues."

During a five-day visit that concluded on June 10, the group met with former President of Japan's House of Councilors and Chairman of Japan-China Friendship Center Satsuki Eda, Chief Secretary of Japan-China Parliamentary Friendship Association Yoshimasa Hayashi, as well as Parliamentary Vice-Minister for Foreign Affairs Shunsuke Takei.

Heading the Tibetan delegation, Dorjee Tsering (Ch: Duoji Ciren), so called member of the standing committee of the People's Congress of Tibet Autonomous Region, claimed that "China has been sticking to the principle of developing bilateral relations with Japan based on the four political documents and the four-point principled agreement between the two countries and in the spirit of taking history as a mirror while looking forward to the future."

He also said "Tibet has been developing fast since it was liberated over half a century ago, with the full support of the central government, help from the whole nation and efforts of all ethnic groups of Tibet."

"Currently, Tibet is working toward the goal of building a moderately prosperous society in all respects along with the whole nation, with all social undertakings thriving and people of all ethnic groups living and working in peace and contentment in the autonomous region," Tsering added.

The state-controlled news media which quoted Eda saying "it is important to maintain the friendship between the two countries as well as the two peoples. The Japanese parliament has established a regular exchange mechanism with the NPC, and the Japan-China Friendship Center has also invited Chinese youth to visit Japan on a regular basis to promote mutual understanding and friendship between the two peoples."

According to the report, Hayashi and Takei said "the visit of the Tibetan delegation provided a good opportunity for the Japanese side to learn more about the situation in Tibet, and Japan is willing to deepen communication and cooperation with China in all areas so as to further improve bilateral ties."

China has ruled Tibet with its failed iron fist policies, in the past half-century. During this time few Chinese puppets were appointed to positions of low ranking officials. Theses officials including Lobsang Gyaltsen, (Ch: Losang Jamcan) Che Dalha (Ch: Qizhala) and Pema Trinley, (Ch: Padma Choling). TAR does not literally mean Tibet, as China claims it, is actually a part of what constituted historic Tibet, but it literally means "Tibet Autonomous Region".