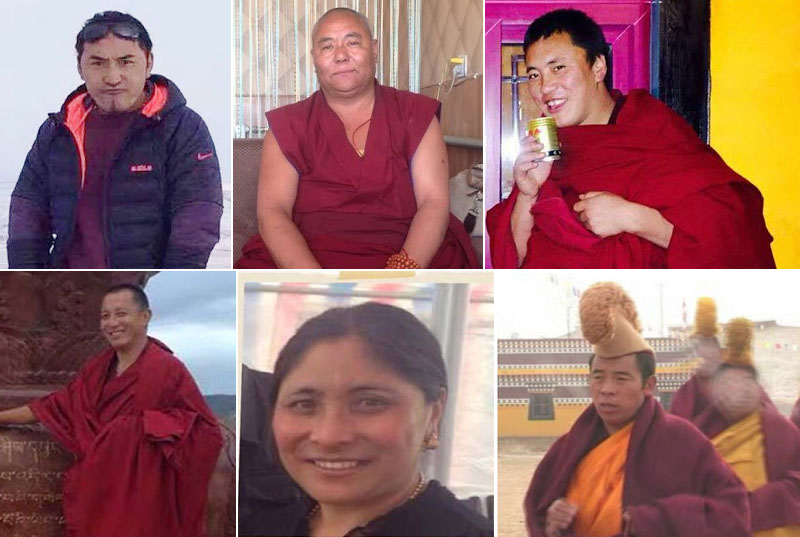 According to Kanyak Tsering and Lobsang Yeshe, spokespersons of the exile seat of Kirti monastery here in Dharamshala, the so called People's intermediate Court of Barkham County in Ngaba (Chinese: Aba) and Qiang Autonomous Prefecture, Sichuan Province, sentenced six Tibetans to varying prison terms for their involvement in a peaceful protest against Chinese rule in Tibet and its harsh treatment of the peaceful Tibetan people.

"The Intermediate Peoples' Court in Barkham, Ngaba prefecture Tuesday morning [December 6, 2016, around 10am] has sentenced 6 Tibetans, both monastics and laypeople, to between 5 and 14 years," Kanyak Tsering told the Tibet Post International on Tuesday evening. Sources indicate that they are probably sentence

The indicted Tibetans were identified as:

1. Drukdra, 50 year old Kirti monk, sentenced to 14 years. He was arrested from his room at the monastery one night at the end of November last year, and his whereabouts have been unknown since then. He is presumed to have been arrested because of suspicion that he arranged celebrations for the Dalai Lama's 80th birthday. He is a former political prisoner, arrested after 2008 and imprisoned for 1 year and 4 months. He is from Soruma, in Ngaba county.

2. Losang Khedrup, 44 year old Kirti monk, sentenced to 13 years. He was arrested and detained at the end of last year, and his whereabouts have been unknown since then. He was arrested on the strength of a voice message about setting up a group to keep a record of pujas done for the Dalai Lama's long life at the time of his 80th birthday. He was previously arrested in 2011 and sentenced to 3 years, but he became very ill in prison and had to be released early. He improved a little after a long period of medical treatment paid for by his family members and associates. He is from the Chukle Gabma area of Ngaba county, and his father's name is Toli. He joined th monastery at a young age, and was near the stage of competing for his Geshe degree.

3. Losang Gepel, 29 year old Kirti monk, sentenced to 12 years. He was arrested from his room at the monastery on the night of November 30th last year, and since then his whereabouts were not known until about a month ago. Earlier he was arrested in May 2011, detained for a long time, and sentenced to 3 years. He was released a few months early at the end of 2013. He is from village no.2 in the Me'uruma area of angaba county, eldest of the 9 children of father Urgyen Tsering and mother Lhamo Kyi. He joined the monastery at a young age and before his arrest he was a manager of the medical college.

4. Lodro, 41 year old Kirti monk, sentenced to 9 years. He was arrested from the monastery at the end of last year, and his whereabouts were not known since then. He was arrested in 2011 and sentenced to 2 years in prison. He is from Shongwa village in Andu area of Ngaba county, and his father is Dukko, a famous painter.

5. Bonko Kyi, 48 year old resident of Lhade Gabma, sentenced to 7 years. She was arrested around November 20th last year, and her whereabouts unknown since then. She is believed to have been arrested on suspicion of arranging popular celebrations for the Dalai Lama's 80th birthday. Earlier she was arrested in 2011 and 2012 and detained for a few months. Her relatives used various means to get her released, but she remained under surveillance. Her father's name is Yarpel.

6. Tsultrim of Dowa village in Trotsik area of Ngaba was sentenced to 6 years. He used to be a monk at Trotsik monastery, but nothing more is known about him.

7. Akyakya, age 35, sentenced to 5 years. Time of arrest not known. He was arrested in 2011 for demonstrating at the time of Losang Puntsok's self-immolation protest, and imprisoned for 3 years. He is from village no.1 in Me'ururma, his mother's name is Dungmo, and he used to be a Kirti monk.

The sources also said that three other Tibetans have been sentenced to jail terms from 6 to 8 year by the Chinese authorities- Tarey sentenced to 8 years, a Tsendra sentenced to 8 years and a Tsultrim sentenced to 6 years, but details about trial date and charges are still unknown. No details were immediately available concerning the condition of their health.