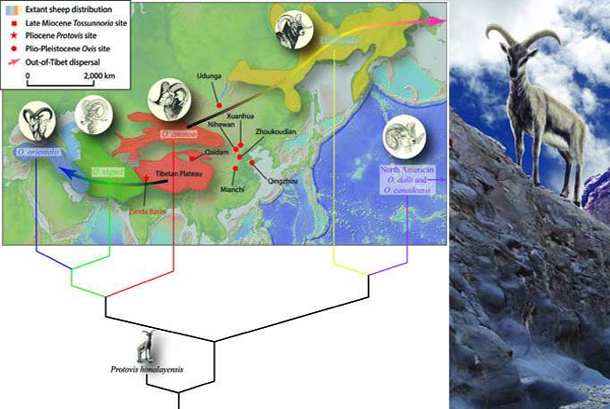 Dharamshala — Modern wild sheep, Ovis, is widespread in the mountain ranges of the Caucasus through Himalaya, Tibetan Plateau, Tianshan-Altai, eastern Siberia, and the Rocky Mountains in North America.

In Eurasia, fossil sheep are known by a few isolated records at a few Pleistocene sites in North China, eastern Siberia, and western Europe, but are so far absent from the Tibetan Plateau.

In a paper published May 4 in the "Journal of Vertebrate Paleontology", paleontologists from the Institute of Vertebrate Paleontology and Paleoanthropology (IVPP), Chinese Academy of Sciences, Natural History Museum of Los Angeles County and La Brea Tar Pits and Museum at Los Angeles reported a new genus and species of fossil sheep from the Pliocene of Tsadha County in Tibet (Ch: Zanda County, TAR).

Researchers believe a new fossil -- and the new species it represents -- proves mountain sheep originated in the highlands of Tibet.

Scientists have long argued that the last ice age's megaherbivores originated in Tibet and spread out across the regions neighboring the Tibetan Plateau as glaciation proliferated.

The only problem: until now, researchers weren't able to uncover the fossils of any ancient mountain sheep on the Tibetan Plateau.

The newly unearthed sheep fossil was discovered in a Pliocene layer of the Zanda Basin in Tibet. It belongs to a new extinct species, Protovis himalayensis. Scientists say the species is an ancestor of modern wild sheep, which are organized under the genus Ovis and found in the mountains of North America, Eurasia and Europe.

This primitive horned sheep adapted to the cold, hard demands of mountain living during the Pliocene, when most regions outside of the Tibetan Plateau were relatively warm. Protovis himalayensis eventually gave way to more recent ancestors of Ovis species. Despite morphological changes, its unique disposition towards harsh, cold climes remained.

When the last ice age arrived 2.6 million years ago, Ovis species were primed to take advantage of new territory.

"With the present discovery of a primitive sheep in the Himalaya, we thus offer another example of our previous out-of-Tibet hypothesis," Wang Xiaoming, senior curator of Natural History Museum of Los Angeles County, explained in a news release.

"Ancestral sheep were adapted to high-elevation cold environments in the Pliocene, and during the Pleistocene they began to disperse outside their ancestral home range in Tibet to northern China, northern Siberia, and western Asia," added Wang, a visiting professor with the Institute of Vertebrate Paleontology and Paleoanthropology in Beijing. "The sheep thus joined several other mammals, such as big cats, arctic foxes, hypercarnivorous hunting dogs, and woolly rhinoceros in their expansion out of Tibet during the Ice Age and gave rise to elements of the Pleistocene megafauna."

Unlike other megafauna species like mammoths and saber-toothed tigers, which succumbed to climate change and human predation, wild mountain sheep were able to seek refuge in the high peaks as the planet once again warmed.

Scientists detailed their latest discovery in the Journal of Vertebrate Paleontology.