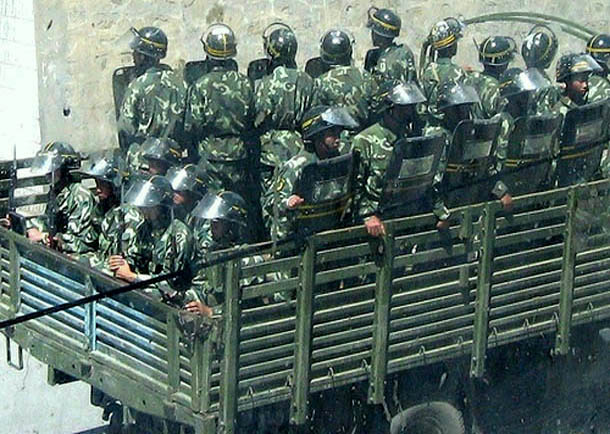 Dhokar, a 26-year-old Tibetan man from the township of Pogurshi, Bathang County was arrested on March 22 in the neighbouring county of Lithang, Mr Kelsang Gyaltsen told The Tibet Post International.

According to Kelsang, the Chinese police arrested him in Masha Thang (Peacock Meadow ) of Lithang county after he had been in hiding in the local wilderness for around three years. In 2008 he allegedly put up posters with Free Tibet slogans on the mountains and hills as well as bombing the police building.

After the arrest in Lithang he was handed over to the authorities of Bathang County who took him into custody. Since the Chinese government issued his arrest warrant in 2008, authorities had been searching diligently for Dhokar, questioning his relatives.

Chinese authorities have stated that Dhokar's crime is similar to that of the respected Tibetan religious leader Tenzin Delek Rinpoche, who was arrested for allegedly being involved in a bomb attack April 3rd 2002 and subsequently arrested four days later. Rinpoche was initially given the death sentence, which was later revoked. He is currently serving life imprisonment.

The authorities also said that anyone found to have been helping Dhokar in his time in hiding will be facing similar charges. Dhokar's family and relatives are extrememly worried that they will not be allowed to visit him or receive any information about him.

According to Chinese authorities, a blast in the Chinese police building in Pogurshi township in Bathang county went off in April-2009, later 70 Chinese authorities, including armed forces and police announced that they would carry out a door-to-door raid. On the night of 14 April 2009, the villagers in Porgushi set fire to a military compound, but there were no casualties. "We will not leave until we have arrested ten people," the military forces warned the local Tibetans. The situation is now very tense between the Chinese military and Tibetans in the area.

Mr. Dakpa, whose mother only is still alive, Dhokar, who has five living family members, Atsok, with six living family members, Pema Wangchuk, who also has six family members, are all suspected of being behind the incidence in 2009. Dhokar in particular, who knows how to speak and write in Chinese, is suspected of creating the banner. When Chinese armed forced police arrived in the town to arrest these four, they escaped into the mountains. Moreover, many men who held responsibilities in the town faced difficulties in staying there, and were forced to flee to neighbouring areas in order to hide from the Chinese military. Owing to the amount of people who have escaped, many farms are left untended.