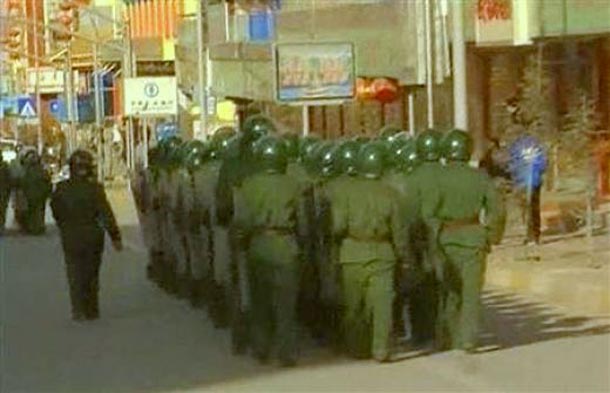 Dharamshala: - Chinese authorities have arrested at least 3 Tibetans, including an university student, after Tibetans and Buddhist monks in Ngaba region of Tibet staging several protests in the past weeks against the Chinese rule over Tibet, according to Ven Kanyak Tsering, Buddhist monk from India based Kirti monastery.

"At about 6 pm on March 25th 2011, a monk of Kirti monastery Lbosang Tsepak, aged 27, a student at the Beijing Minorities University, was arrested. His father, named Dhondrup, is deceased, and his mother's name is Dondema. He was studying at BMU, and the reason for his arrest and place of detention are not known," said Tsering.

"On March 24, another the Kirti monk Lobsang Choephel, aged 24, of Kanyag Dewa (pastoral community), Trotsik township in Ngaba county, was arrested and taken away from the monastery compound. The reason for his arrest and other details are not known," he added.

Also around March 24, Losang Ngodrup, aged 32, a monk at Kirti monastery's Tantric college, from upper Chukle in Cha township, Ngaba county, was also arrested. There are no further details on the reason for his arrest. The monks Samdrup, Losang Tenzin and the layman Puntsok, who were arrested earlier, are still in detention.

According to reports received by Tsering on April 1st, a large number of troops sent to enforce the blockade of Kirti monastery entered the compound today, and prevented even the 70 year old (elderly) monks previously removed to the outer perimeter from moving freely, and it is feared that if this blockade continues, the monks will face problems obtaining daily essentials.