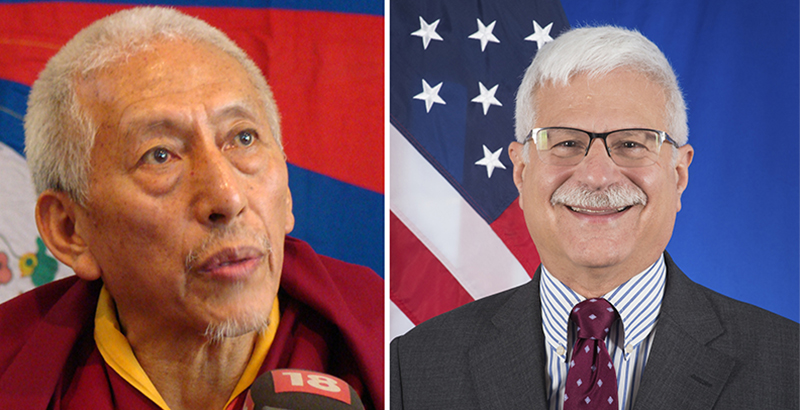 New Delhi, India — When President Xi Jinping speaks of Tibetan Buddhism "with Chinese characteristics", he only reveals China's intentions to destroy Tibet's unique cultural identity and subjugate it to communism, and Xi's claims about the exclusive rights of the Chinese Communist Party to install the next Dalai Lama of its choice are too ridiculous to matter to the people of Tibet or the world community.

These are the two main observations that emerged in the presentations of two experts of international eminence in a webinar which was organized to commemorate the 86th birth anniversary of the Nobel Peace Laureate His Holiness the Dalai Lama. The two experts Robert Destro, former Assistant Secretary of State and the United States Special Coordinator for Tibetan Issues, and Prof Samdhong Rinpoche, former ‘Kalon Tripa’ (President) of Tibet were speaking at an international webinar entitled “Significance of the Dalai Lama for Future of Tibet and China’s claims Over His Next Incarnation”. The webinar was organized jointly by the Centre for Himalayan Asia Studies and Engagement (CHASE) and Tibetan Youth Congress (TYC) at New Delhi, Dharamshala, and Washington (DC) to commemorate the 86th birth anniversary of Dalai Lama on July 6, 2021.

“When Chinese President Xi Jinping insists upon Tibetan Buddhism with Chinese characteristics or when the Communist Party of China claims to control the reincarnation of the Dalai Lama by force as they did in the case of the Panchen Lama, it is in the same line as what they have done to the Catholic Church in China, to Hong Kong, to the Uighur People of Xinjiang or the Mongolian people of South Mongolia. Their goal is explicit -- to eliminate whatever makes each of these communities unique. Their uniqueness will be subsumed in the collective materialism and the uniformity of communism,” said Destro.

It was during the tenure of Destro that the historic “Tibet Policy and Support Act-2020” of the US was passed by the US Congress and signed as a law by President Trump on the joint initiative of his Republican Party and the Democratic Party during the concluding days of his Presidency. Destro presented his perspective on Dalai Lama’s ‘Middle Way Approach’ as an effort to preserve the unique nature of Tibet and the freedom of the Tibetan People while recognizing that “when there is a great disparity of power – as it is today between the People’s Republic of China and the Tibetan People -- peaceful alternatives must be sought without conceding an inch.”

Underlining the relevance of His Holiness Dalai Lama’s advice to cultivate human values of compassion, forgiveness, tolerance, contentment, and self-discipline, Destro said, “were we to engage in the daily cultivation of each of these human values in our lives, the world would become a far more hospitable place in which to live and to raise our children.” Offering a philosophical and spiritual ground to the Tibetan struggle against Chinese oppression Destro said, “Given our commitment to preserving that which makes us unique as individuals and communities, we must find not only the strength to tolerate the arrogance of those who would enslave us, but also the compassion to devise a strategy of resistance and self-preservation that acknowledges their humanity of the oppressor, as well as the human weaknesses and insecurities that come with that humanity.”

Addressing the issue of President Xi Jinping’s persistent assertion that finding and installing the next incarnation of the present Dalai Lama is the exclusive prerogative of China’s Communist Party and the Central government of the People’s Republic of China (PRC) Prof Samdhong Rinpoche, an internationally acclaimed academician on Buddhist philosophy, dismissed this claim as ‘ridiculous’ and inconsequential. “Whenever Chinese leaders make such types of claims they are doing so because of their own fears and uncertainty in their mind. Such claims are so ridiculous that they neither deserve to be taken notice of nor qualify to be reacted upon. That is why I simply ignore what the Chinese government is saying.”

Besides being the founding Director of Central Institute of Higher Tibetan Studies at Sarnath and the Chancellor of Sanchi University of Buddhist Indic Studies Prof Samdhong Rinpoche has also been the President of the Association of Indian Universities.

Throwing an open challenge to President Xi Jinping and his CPC colleagues on the basic concept of reincarnation, Prof Samdhong Rinpoche said, “Does the ‘Central government’ of China, which claims to be communist or Marxist, believe in the continuation of the consciousness or reincarnation? Do they really understand what happens after death? If they do so then they should understand that human consciousness does not come to an end at the time of death and that it will have another birth. Only then you can talk of the idea of reincarnation. If they really believe in this then they should stop talking about the Marxist dialectical materialism which is based on the principle that the mind is the quality of matter and that it also ceases with death and hence there is no continuity of consciousness after death. If they don’t change this principle then it means that they don’t believe in birth after death or continuity of consciousness. In that case, their claims about recognition of next Dalia Lama is just hypocritical.”

Blasting the Beijing government’s claims about identifying Dalai Lama’s based on lottery from a golden urn Prof Samdhong Rinpoche said, “I am aware that during the 18th century Tibetans had good relations with the Manchu emperors in central China. They did advise us to use the method of lottery through the golden vessel for the selection of Dalai Lama and Panchen Lama. But in spite of their suggestions, neither of the 9th, 10th, 11th, or 13th or 14th Dalai Lama was selected that way. It was only the 11th and the 12th Dalai Lamas who were selected through a lottery from a golden vessel. Even in these two cases too, it was not exclusively through the golden vessel but the process was only a part of an entire religious process. There is no such tradition or past heritage that the Dalai Lama must be recognized through this way.”

Prof Samdhong Rinpoche reminded Chinese leaders of their frustrating experience in the case of the 11th Panchen Lama who was forcibly appointed by Beijing after arresting the five-year-old boy Gedhun Choekyi Nyima in 1995 who was recognized by the Dalai Lama from exile as the real incarnation of the 10th Panchen Lama. “Installing a boy of their own choice and the 11th Panchen Lama did not solve their purpose. The same thing is going to happen if they appoint a boy of their own choice and the next Dalai Lama. No people of Tibet, no people of the world would either recognize him or believe in him,” he said.

Talking about the qualities of the present Dalai Lama, 14th in the five centuries-old traditions of Tibet, Prof Samdhong Rinpoche said, “Though His Holiness the Dalai Lama is a Tibetan leader he never perceives future of Tibet as different from the rest of world or even that of the people of China. In his Middle-Way approach to handle differences or confrontation, there is no concept of a winner or a loser. He believes sincerely that the present century should be the century of dialogue which is based on mutual understanding, universal responsibility, secular ethics, and concern for the environment.”

Vijay Kranti, Chairman CHASE and an acclaimed Tibetologist moderated the discussion. His co-organizer Gonpo Dhundup, International President of TYC presented a vote of thanks and Prof Aayushi Ketkar, a scholar of international relations at JNU, handled the question-answer session. Answering a question during that session Prof Sasaid it is not necessary that the next incarnation of Dalai Lama must be a Tibetan child. He could be from any part of the world. In response to another question, Destro said that even a century is not a too long period in the history of a nation. Therefore the Tibetan people should work towards preserving their national identity and determination for a long period.