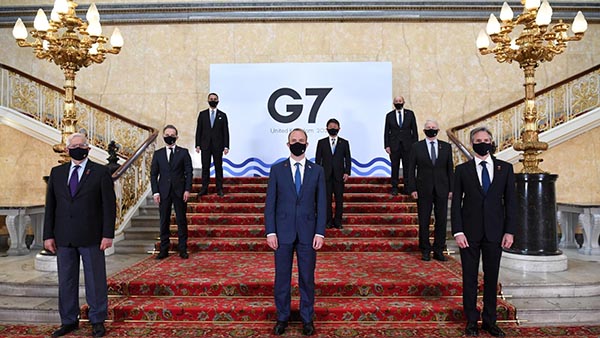 The Foreign and Development Ministers of the Group of Seven (G7) and the High Representative of the European Union met on May 3 to 5, 2021, at a time when democracy is under attack around the world, the pandemic continues to pose challenges to our healthcare system, new technological threats are on the rise, and the effects of climate change are only getting worse.

“We call on China to respect human rights and fundamental freedoms. We continue to be deeply concerned about human rights violations and abuses in Xinjiang and in Tibet, especially the targeting of Uyghurs, members of other ethnic and religious minority groups, and the existence of a large-scale network of “political re-education” camps, and reports of forced labour systems and forced sterilisation,” mentioned in the G7 ‘s Foreign and Security Policy communique.

Australia, India, the Republic of Korea, and South Africa were attending the meeting as guest countries to take forward notions of shared priority ahead of the G7 Leader’s Summit in June 2021.

The Foreign and Development Ministers called upon the Government of China to participate constructively in the rules-based international system. ‘It is in all of our interests, including China’s, to take action that addresses global challenges including climate change and biodiversity loss, to promote economic recovery from COVID-19, and to support the fight against the current pandemic and prevent future ones. We look for opportunities to work with China to promote regional and global peace, security, and prosperity'.

“Tibet’s inclusion in the agenda of high-profile meetings such as the G-7 summit at a time when the repression inside Tibet is at its peak sends a powerful message of hope and justice to the Tibetans inside Tibet and around the world,” stated the Central Tibetan Administration(CTA).

“Under the new and unprecedented cloud of internet and communication firewall, Tibet has virtually become a black hole for information. News emerging out of Tibet has gone down to a trickle drawing a grim picture of the scale and intensity of both military and digital surveillance in Tibet,” CTA added.

Tibet has been ranked among the least free countries in the world for the fifth year in a row, according to the Freedom House report in 2021, with only Syria being considered less free. Tibet had been given the “worst” ranking for years, with an average score of one, and had been ranked first among the least-free countries since 2015. The ranking for 2021 represents a fundamental shift as Tibet is now tied with Syria as the least free country in the world in terms of freedom.