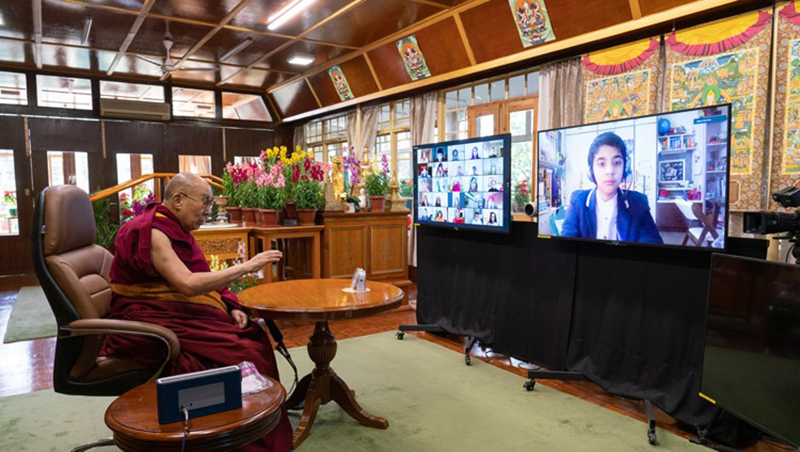 His Holiness the Dalai Lama answering a student's question during their conversation on Well-being and Resilience at his residence in Dharamsala, HP, India on January 22, 2021. Photo by Ven Tenzin Jamphel

Dharamshala, India – “As long as there is a way to overcome the problem, we must make the effort,” said His Holiness the 14th Dalai Lama while in a conversation with the students of The British School in New Delhi, from his residence at Dharamshala, HP India on January 22, 2021.

The virtual session, titled Well-being and Resilience was an online talk given by His Holiness, followed by a question and answer session with the students of The British School (TBS). The students, aged between 11 and 14, were in attendance from India and from across the world.

Firstly, Mrs Neelkamal Sihota, a mathematics teacher at the British School, thanked the Nobel Peace Prize Laureate for accepting the invitation and sharing his thoughts on well-being and resilience, amid the time of a global pandemic. His Holiness expressed his delight over the session being conducted with a diverse crowd of students, and mainly the students in India. “I, myself was educated about Indian tradition, the Nalanda tradition in my childhood. So mentally, every part of my brain was filled with Indian thought and Indian tradition. After that, a major portion of my life was spent in India,” he continued.

“Modern scientists have knowledge about material things, but regarding the mind there is not much knowledge. In that respect, there is a detailed explanation about the mind in Nalanda tradition such as causes of destructive and constructive emotions, all of these things are very clear. So, many scientists now appreciate this knowledge about the mind and emotion, and then how to combat those emotions,” he added.

His Holiness went to say that India has the ability to combine modern education with ancient Indian knowledge, and that parts of modern India are neglecting this ancient Indian knowledge. “Just as in the previous century Mahatma Gandhi showed the world the importance of Ahimsa, I hope that these young students can come to do the same in regards to peace of mind,” addressed the Tibetan spiritual leader.

“Through inner peace, real world peace can be attained. Every person desires a peaceful world. Getting rid of weapons can be thought of as a good step towards achieving this goal, but real world peace is connected with our emotions, with our mind,” He addressed while talking about developing inner peace. While being asked a question about the mental and social impacts of the pandemic, His Holiness laid focus on the health care workers tackling this huge threat and expressed appreciation for their efforts. “We cannot, in any way, discourage the health care workers, doctors and nurses working to combat the pandemic. When we face a problem, we must carry determination and courage, in order to fight. I want to thank those specialists and Health care workers, and I want to urge them to work as hard as before,” he expressed.

The next question asked by a student was about maintaining mental well-being, His Holiness responded by drawing a relation between the physical body and human emotion. “If our emotion is full of self-confidence and calmness, then that positively affects our body. If there is too much anxiety or too much fear mentally, then that can be harmful for our body. When we face a problem, we need to analyse it thoroughly and if we find a way to overcome the problem then we need to face it with full determination and courage. But, if we find no ways to overcome the problem then we need to accept it as a reality instead of building up too much anxiety, anger and frustration,” he explained.

Another student questioned His Holiness the 14th Dalai Lama if there will ever be a return to peaceful conditions in the world, “Yes” His Holiness replied, and further stated that many of the problems being faced today are essentially our own creations. “There is excessive emphasis on ‘we’ and ‘I’. We need to develop a sense of oneness with the whole world. There is also excessive emphasis on ideologies that create division through nations, religions and communities. Therefore, the need to achieve a sense of oneness of the whole world is paramount,” he said.

Answering a question about being consistently resilient, His Holiness put emphasis on determination. “As long as there is a way to overcome the problem, we must make the effort. Without that, there will come an eventual feeling of regret. When a problem is beyond our control, being completely discouraged is not good,” he stated. His Holiness further gave an example of his own struggles and talked about his escape from Tibet in 1959. “It looks almost hopeless. I escaped from Tibet on the night of march 17, 1959. I escaped with a feeling of suspicion, about whether I would come to see the next day or not. But I was determined. With that determination, we can eventually overcome our problems,” he affirmed.

The hour-long session came to a close with the main speaker thanking His Holiness the Dalai Lama for his presence and introspective dialogue. The secondary school principal Mr Mark Tate then went to thank His Holiness on behalf of the whole school community. “The thread of many questions that we have been hearing from students has all been about looking at our current situation and beyond. It’s been wonderful to listen to you, because you have shown that your depth and breadth of knowledge is a large lake that all young people can drink from,” he expressed.

The final words came from the Tibetan spiritual leader, wherein he expressed his excitement about discussing the importance of education with more institutes, universities and prioritized the need to revive ancient Indian knowledge and combine it with the modern educational system.