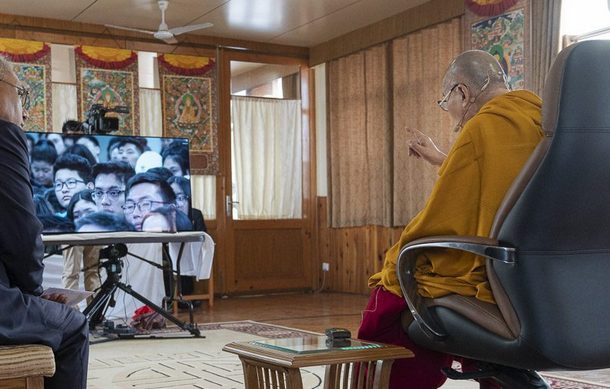 His Holiness answering questions from Chinese and Tibetan students in New York through a video conference, on January 11, 2020. Photo by Tenzin Phuntsok

Dharamshala, India — In a public statement, His Holiness the Dalai Lama called on people around the world to unite in the fight against coronavirus outbreak — making one of the deadliest battles in human history. "We need to reach out to each other with compassion".

“In this time of crisis, we face threats to our health and sadness for the family and friends we have lost. Economic disruption is posing a major challenge to governments and undermining the ability of so many people to make a living,” the Nobel Peace Prize Laureate stated.

His message to the Call to Unite, the spiritual leader of Tibet said, “It is during times like this that we must focus on what unites us as members of one human family. Accordingly, we need to reach out to each other with compassion. As human beings, we are all the same”.

The spiritual leader of Tibet further stated: "We experience the same fears, the same hopes, the same uncertainties, yet we are also united by a desire for happiness. Our human capacity to reason and to see things realistically and clearly give us the ability to transform hardship into opportunity."

"This crisis and its consequences serve as a warning that only by coming together in a coordinated, global response, will we meet the unprecedented magnitude of the challenges we face. I pray we all heed ‘The Call to Unite’," His Holiness concluded.

The spiritual leader of Tibet recently emphasised the importance of ensuring that frontline medical workers and care providers throughout the world are provided with fundamental necessities, such as clean water and effective means of sanitation and hygiene, as they work to limit the spread of the virus known as SARS‑CoV‑2.

He also noted that sustainable and properly equipped healthcare facilities are essential to effectively address the current crisis, as well as being a strong defense against future potential public health emergencies.

The Nobel Peace Prize laureate recalled developing an appreciation for the importance of environmental conservation after fleeing the Chinese invasion of Tibet in 1959: “Whenever we saw a stream of water,” he said. “There was no worry about whether it was safe to drink. Sadly, the mere availability of clean drinking water is a major problem throughout the world today.”

Over the last 60 years, he has traveled around the world spreading a message of peace and universal responsibility. He also believes that the common aim of all religions is to foster tolerance, altruism, and love. He retired from politics in 2011 but, as one of six million Tibetans, His Holiness said he will continue to serve Tibet’s cause.

In 1959, His Holiness the 14th Dalai Lama along with thousands of others escaped to India, where he was given political asylum. The spiritual leader has set up a government and rebuilt monasteries where masters pass on their teachings to young monks. Tibetans in exile have succeeded in gradually rebuilding their monasteries, preserving their culture, and restructuring their society, in spite of the extremely difficult circumstances.

The Chinese Communist totalitarian regime (PRC) began their invasion of Tibet in 1949, reaching complete occupation of the country in 1959. Since then, more than 1.2 million people, 20% of the nation's population, have died as a direct result of China's illegal invasion and ruthless occupation.