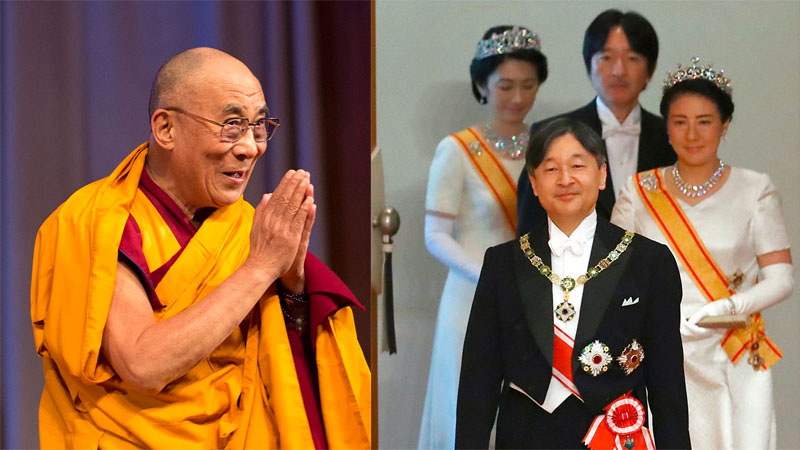 His Holiness the Dalai Lama Congratulates the New Emperor of Japan. Photo: TPI

Dharamshala — The spiritual leader of Tibet, His Holiness the Dalai Lama on Wednesday congratulated Japan’s new Emperor Naruhito on his enthronement and the dawning of the new Reiwa era.

The new emperor succeeded his father, Akihito, who became the first emperor to abdicate since 1817. Akihito now holds the title of joko and has retired from public duties along with his wife, now Jokogo Michiko.

“I warmly admire Your Majesty’s determination,” His Holiness wrote, “to continue your respected father’s, the Emperor Emeritus’s, compassionate approach of interacting closely with the public, while fulfilling the responsibility of Symbol of the State."

“I have profound respect for the resilience of the people of Japan and for the way the nation rose up again from the ashes of World War II. In subsequent years too, Japan has faced unprecedented, natural disasters but has recovered thanks to a combination of hard work and strength of spirit," the spiritual leader of Tibet said.

"I have seen this with my own eyes when I had the opportunity to visit areas struck by the devastating earthquake and the tsunami of 2011. I met there with people affected by these calamities and we prayed together for those members of the community who had lost their lives," the 83-year-old Nobel Peace Prize laureate added.

“Over the last fifty years or so, during regular visits to Japan, I have deeply appreciated the interest and enthusiasm that people from all walks of life have shown in my efforts to encourage the cultivation of such fundamental human values as compassion and religious harmony.”

In his congratulatory letter, His Holiness concluded with a prayer that His Majesty’s reign will be successful, that the people will be happy, and that the new era will contribute to a more peaceful, compassionate world.

Dr Lobsang Sangay, President of the Central Tibetan Administration sent greetings to Shinzo Abe, the Prime Minister of Japan and the people of Japan on the historic occasion of the enthronement of crown prince His Majesty Naruhito. In his letter, President said: "The reign of the next Japanese emperor which will be known as the ‘Reiwa‘ era translates as ‘Hope’ in the Tibetan language."

"The official Japanese translation of Reiwa is ‘beautiful harmony’. “I would like to extend our heartfelt congratulations to the people of Japan today on the historic occasion of the enthronement of crown prince His Majesty Naruhito as the new emperor as it ushers Reiwa era, which coincidently means hope,” Dr Sangay added.

In modern Japan, imperial era names, or "gengo", are widely used in Japanese calendars, on coins and on official documents, and the new name was announced on April 1 to facilitate changes to these. Reiwa is translated by the government as "beautiful harmony". Leaders around the world offered congratulations to Japan's new Emperor Naruhito, who ascended the Chrysanthemum Throne a day after his father Akihito abdicated.

Former Emperor Akihito, enthroned aged 55 on January 8, 1989, a day after his father Emperor Hirohito died, indicated his wish to abdicate in an August 2016 video address, saying he might not be able to fulfill his duties due to his advanced age. In 2017, Japan enacted one-off legislation to enable him to step down.

Emperor Naruhito succeeded to the Chrysanthemum Throne recently and pledged to stand with his people following the example set by his father, who abdicated the previous day as the first Japanese monarch to do so in 202 years. The 59-year-old emperor, the first to be born after World War II and to have studied overseas, also vowed in an enthronement ceremony to fulfill the symbolic, nonpolitical role in accordance with the postwar Constitution.