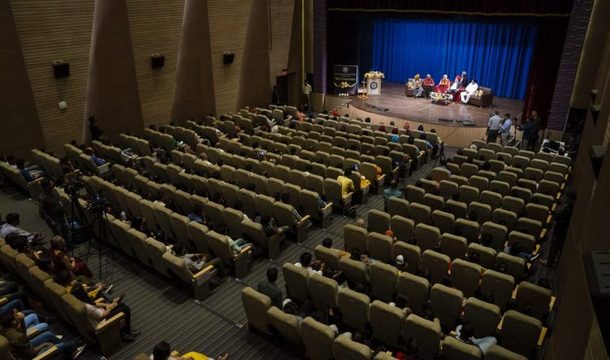 A view of the auditorium during the 25th founding anniversary celebrations of Guru Nanak College of Arts, Science & Commerce in Mumbai, 13 December 2018. Photo/Lobsang Tsering/OHHDL

Mumbai, India — "Despite all the hardship Tibetans have faced, their spirit is unsubdued and remains strong. Chinese hardliners have failed to suppress Tibetan language and culture," His Holiness the Dalai Lama said, adding: 'Things are changing and that a totalitarian system has no future.'

The Nobel Peace laureate's comment came during a question-and-answer session at Guru Nanak College in Mumbai, where His Holiness delivered the Silver Lecture on compassion at the college on 13 December 2018. His Holiness answered to questions about the future of Tibet and why there was no Bhikshunis system in Tibetan Buddhist tradition.

On the issue of Tibet, His Holiness said despite all the hardship Tibetans have faced, their spirit is unsubdued and remains strong. Chinese hardliners have failed to suppress Tibetan language and culture. These days, Chinese Buddhists are increasingly coming to appreciate the Tibetan Buddhist tradition. He remarked that things are changing and that a totalitarian system has no future.

His Holiness said he is committed to speaking up for the protection of its natural environment. He mentioned a Chinese ecologist’s observation that Tibet is as important to the balance of the global climate as the North and South Poles, so he referred to it as the Third Pole.

He added that he is committed to keeping Tibet’s knowledge of philosophy, psychology and logic alive, as well as the Tibetan language in which it is most accurately expressed.

A member of the audience asked why there were no Bhikshunis, fully ordained nuns, in the Tibetan tradition that Shantarakshita established the Mulasarvastivadin monastic discipline in Tibet. He said, “According to that tradition, the ordination of Bhikshunis requires the presence of a Bhikshuni abbot and no such person came to Tibet. In recent years, however, some Tibetan nuns have taken the ordination in the Chinese tradition.”

In the past, Tibetan nuns generally did not study extensively, but over the last 40 years, His Holiness has encouraged them to do so. Consequently, there are now nuns who have been awarded the Geshe-ma degree indicating that they have training and knowledge equivalent to similarly qualified monks.

Speaking on his second commitment: promotion of religious harmony, the Tibetan spiritual leader offered his deepest admiration for Guru Nanak, who came from Hindu background made a pilgrimage to Mecca as a mark of respect. “What a great gesture?

“India sets an example to the rest of the world when it comes to religious understanding, the practice of ahimsa, Karuna. We need such qualities here and now in the 21st century because as human beings we are essentially the same and we all have to live together on this small planet.”