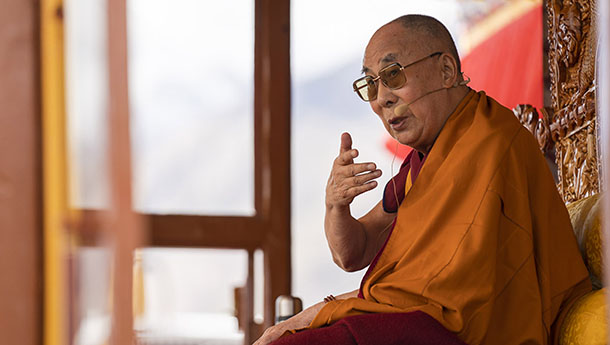 Tibetan plateau is staring at ecological destruction due to extensive mineral extraction, deforestation and unscientific construction of highways and railways by the Chinese in the name of development. Photo: File

Dharamshala, HP, India — The Tibet Policy Institute a think-tank run by the Central Tibetan Administration has released a research paper contradicting China’s claim over progress made in Tibet ecology. The paper called Chinese White paper a ‘brazen lie’ and said “it would be wonderful reading to someone who knows very little about Tibet”.

The think-tank paper said the white paper, published by the China State Council Information was full of contradiction, lies with no real backing and data to substantiate it's claim.

“The case of waste from lithium mines been flushed into the Lichu river in Minyak Lhagong ( Karze region of Tibet) by the Ronda Lithium Co Limited is one such example. The toxic waste caused (May 4, 2016) mass death of fish and polluted the drinking water source of the local communities.

In a similar case on September 23, 2014, more than 1,000 local Tibetans of Dokar and Zibuk villages near Lhasa protested against the poisoning of their river by the Gyama Copper Poly-metallic mine. The mine is located close to a river that locals use for drinking, irrigation and feeding their livestock.

Another example of lack of proper water management is the rampant dumping of rural and urban wastes into nearby rivers. The paper states that RMB 6.3 billion was spent on domestic sewage and waste disposal projects but in reality, the garbage collection and management facilities are almost non-existent across Tibet, especially in rural areas”.

Amchok anti-mining crackdown is clear example of the above circular. On May 31, 2016, around 2,000 local Tibetans of Amchok in north-eastern Tibet gathered to protest against mining on their sacred mount Gong-nyong Lari. But the Chinese government brutally suppressed the protesters by seriously injuring many and detaining six local Tibetans.

The research paper also strongly criticised China of ignoring important issues. The paper said there was no any mention of floods, landslides and mudslides havocking Tibet in recent years.

“The mountainous Tibetan Plateau faces the severest impact of climate change due to its high elevation at low latitude. The situation is further exacerbated by unregulated constructions and mining activities in the region. The plateau has seen an unprecedented number of natural disaster across Tibet since 2016. There are numerous floods and landslides occurring in North-eastern and Central regions of Tibet as we write. Unfortunately, the paper does not mention these natural disasters or efforts taken by the Chinese government to mitigate the impact”.

The piece also made accusation against China for their lack of understanding of the current socio-environmental situations in Tibet.

“The Chinese government has done very little to address climate change and put forth any preventive measures to mitigate the impact of increasing incidents of natural disasters. As is often the case, it has been the Tibetan monasteries who have rushed to the scene of natural disasters to help the public. The lack of jobs and educational opportunities in the resettled areas have pushed the nomadic population into the margins of the society where they are compelled into alcoholism, prostitution, and children engaging in petty crimes. A whole generation of Tibetans are impoverished and forced into destitution”.

While it welcomed stricter regulations on environmental protection, the paper called for similar policy in ‘regulating the influx of millions of tourists into the plateau’.