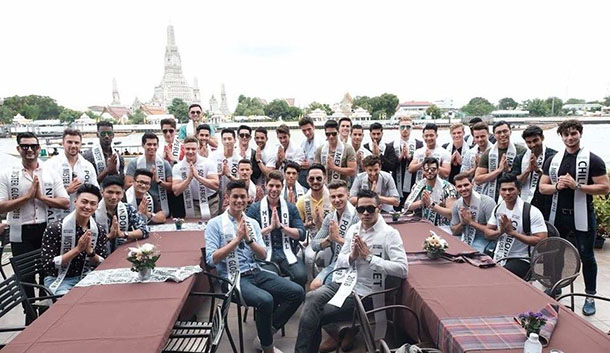 Bangkok — Mister Global 2018 has officially started as some of the most handsome men from all around the world arrived in Thailand on Thursday. Mister Tibet joined with other contestants as some of the first to touch down in Bangkok July 12, 2018.

Over the next five days nearly 50 men from around the world battle it out to become the 5th Mister Global.

Each representative received the sash of the country they are representing upon their arrival and the group had their official photo shoot followed by more sightseeing.

The contestants were welcome with a special event at the Vertigo and Moon Bar at the Banyan Tree Hotel where they got to get to know each other better while enjoying the spectacular view of Bangkok.The official sashing ceremony also took place on Saturday and contestants also visited Wat Arun Ratchawararam Temple in Bangkok on Monday.

“It was never easy for me to get there but finally, it got done. A long dreamed dream has finally come true. I will never be more proud than to represent my beloved country, Tibet before the world," said Tenzin Nyima, the 25 year old man who became the first to win the the Mr Tibet title.

"My deepest gratitude to all the people whose supports and encouragements made my every step faster. I will never stop dreaming bigger and never let you all down. It is time to make an another big step Mister Global 2018.” added Nyima in a Facebook post.

“This year, we will be celebrating our 5th Mister Global. We promise that it will be a production design you have not seen yet,” said Mister Global chairman Pradit Pradinunt in a Facebook post on January 16, 2018.

The organizer says it "motivates" every man to be their personal best, self-assured, and personify the company’s goal of having "Handsomeness, Attitude and Intelligence."

Mister Global, is an annual male beauty pageant founded in 2014 and become a member of Grand Slam of Beauty Pageants™on its 3rd edition.