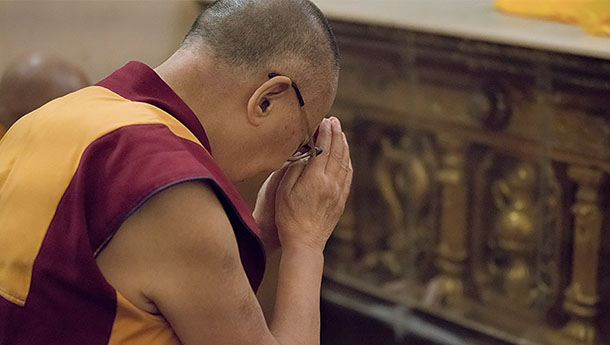 Leh, J&K, India — The spiritual leader of Tibet, His Holiness the Dalai Lama Monday expressed deep condolences to Prime Minister of Japan Shinzō Abe over the deaths and numerous injuries in the widespread floods and landslides taken place in Japan because of torrential rain.

As rescuers in Japan race to find survivors after torrential rain caused floods and landslides that killed at least 119 people, His Holiness the Dalai Lama has written to the Japanese Prime Minister, Shinzo Abe, according to his official website.

“I am writing to express my sadness over the loss of life, devastation of property and hardship caused to so many,” his letter made clear. “I have visited Hiroshima several times and am familiar with that part of the country. I feel a great sympathy for the families of people who have died and those who have lost their homes.

“I appreciate the efficient steps that are being taken to seek out and rescue those affected and provide relief. I pray for the success of the measures being taken.

“Over the years I have been able to visit Japan regularly and have appreciated the interest and enthusiasm that people from all walks of life have shown in my efforts to encourage cultivation of fundamental values such as compassion and religious harmony. Today, I want to express my concern for all those facing distress as a result of this severe natural disaster.”

In conclusion His Holiness wrote, “I would like to recommend that recitation of the ‘Heart Sutra’ would be of benefit at this sad time.”

The Meteorological Agency is warning that that landslides and flooding continue to pose a danger and the number of casualties is expected to rise further. Many people are believed to be stranded in their homes where roads have been cut off by the flooding.

As of Monday morning, around 23,000 people were sheltered in evacuation centers, and Prime Minister Shinzo Abe announced that a special disaster response unit has been boosted to 73,000 and said it is “putting in utmost efforts to save lives.”

Prime Minister Abe also cancelled a planned trip to Europe and the Middle East as the government stepped up rescue operations, and is reportedly arranging visits to areas hit hard by the massive flooding and landslides that began last Thursday.