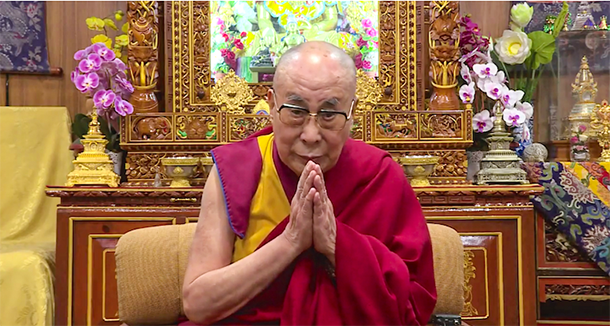 His Holiness the Dalai Lama thanking the Government of Canada for supporting Tibet and Tibetan people. Photo: Screenshot from YouTube Video

Dharamshala, India — His Holiness the Dalai Lama on Wednesday thanked the Government of Canada and people for its continued support for Tibet and Tibetan people.

In a 4-min video message released on June 13, 2018, the spiritual leader of Tibet thanked Canadian government and people for its significant contribution towards the Tibetan exile community and supporting it to become quite successful in the past 60 years.

His Holiness’ message was screened at the ‘Thank You Canada’ celebrations held on Wednesday at Parliament Hill, Ottawa. The event was jointly hosted by Office of Tibet, Parliamentary Friends of Tibet and Canada Tibet Committee.

“Dear Canadian brothers and sisters and including leaders, I just want to express my thanks. For many decades, Canada has been one of the staunch supporters of Tibet. Also, a large number of Tibetan settlements accepted. Personally, you gave me honorary citizenship of Canada. Therefore I would like to express my deep appreciation. Then also Canada, it seems many refugees or people from the difficult area, you accepted quite easily. That also I feel is wonderful," the Nobel Peace Laureate said in the video message.

“I always emphasise the 7 billion human beings on this planet, we are same human being and we are social animal. Someone passing through a difficult period, then the other one has the moral responsibility to help them, to look after them. In the name of different nationality and religious faith and some other human brother and sister passing through a difficult period, but you more or less ignore, that’s immoral," His Holiness continued.

“I think according all major world religious traditions, the Indian tradition, some non-theistic religion, then we consider good action, compassionate action as a source of happiness. Then theistic religion, we are all created by one god, almost like our one father. That father infinite love, so we all 7 billion human being on this planet are actually brothers and sisters; same father," he further added.

“So all major religious traditions teach us the practice of love and compassion. It is not just lip service but actually when a group of people or individual (is) really passing through difficulty then help them. That is the implementation of God’s message; love. So I just want to express these things and thank your country, your government and people. We as a refugee, homeless, stateless, however, we survived with compassionate sense of caring, we survived. Now around 60 years, quite successful, so Canadian government and people really made a significant contribution for that. Thank you”.