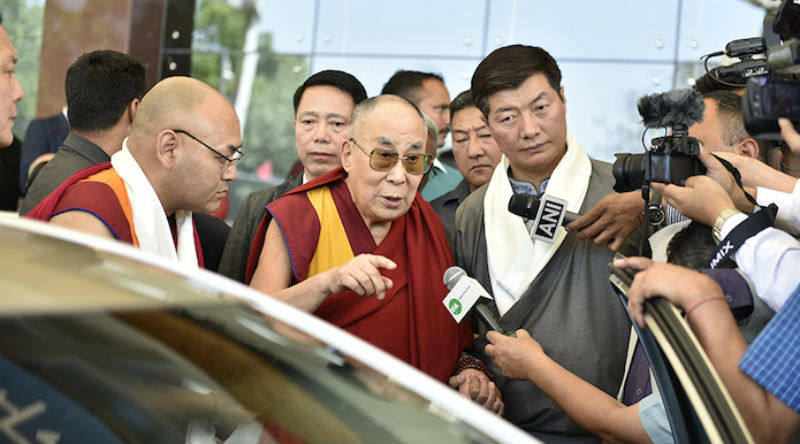 His Holiness the Dalai Lama speaking to members of the media on his arrival at Gaggal Airport in Dharamshala, India, April 25, 2018. Photo/Tenzin Jigme/DIIR

Dharamshala, India — Speaking to members of media on his arrival at Gaggal Airport in Dharamshala on Wednesday, the spiritual leader of Tibet, His Holiness the Dalai Lama said that the 11th Panchen Lama Gedhun Choekyi Nyima, “according to reliable information is alive and carrying normal education”.

The Nobel Peace Prize Laureate who had just returned from a four-day visit to Indian capital New Delhi, was asked to respond on the occasion of Panchen Lama’s 29th birth anniversary.

His Holiness commented on Gedhun Choekyi Nyima, recognised by His Holiness the Dalai Lama as the reincarnation of Panchen Lama and on Gyaltsen Norbu, officially appointed by the Chinese government as the Panchen Lama.

“I hope, the official Panchen Lama also study quite well under the guidance of one good teacher. Then the Panchen Lama, which I recognised, sometime back [there were] no news, but then according to reliable information, he is still alive and carrying normal education. So we will see,” he told the reporters.

His Holiness further commented that there are instances in Tibetan Buddhist tradition, where a reincarnate lama took more than one manifestation.

“One century ago, one very famous Khyentse Wangpo, he manifested five incarnations (Body, Speech, Mind, Quality, and Activity). Ofcourse holding of the seat is just one, but something like, manifestation of the previous incarnation could be more”.

Prior to media interaction, His Holiness had a brief meeting with Jillian Turner, Program Officer from the US State Department, Bryce Isham, First Secretary at the US embassy, and J P Das, Country Exchange officer at the American Center, Ngawang Younten, Department of Education and Tenzin Choephel, program coordinator at Tibet Fund.