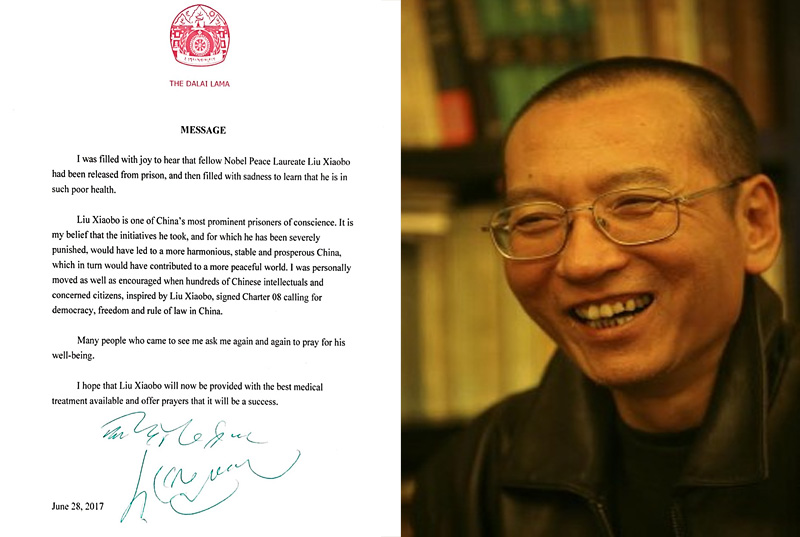 Dharamshala — The spiritual leader of Tibet, His Holiness the Dalai Lama has expressed concern, for Liu Xiaobo, the Chinese Nobel Peace Laureate who has been released from prison after being diagnosed with late-stage cancer.

"I was filled with joy to hear that fellow Nobel Peace Laureate Liu Xiaobo had been released from prison, and then filled with sadness to learn that he is in such poor health,"His Holiness said in a letter dated 28 June,

"Liu Xiaobo is one of China's most prominent prisoners of conscience. It is my belief that the initiatives he took, and for which he has been severely punished, would have led to a more harmonious, stable and prosperous China, which in turn would have contributed to a more peaceful world," the Tibetan leader said.

"I was personally moved as well as encouraged when hundreds of Chinese intellectuals and concerned citizens, inspired by Liu Xiaobo, signed Charter 08 calling for democracy, freedom and rule of law in China," he said, adding: "Many people who came to see me ask me again and again to pray for his well-being."

"I hope that Liu Xiaobo will now be provided with the best medical treatment available and offer prayers that it will be a success," His Holiness added.

Many government leaders, Human rights groups and fellow dissidents around the world react after Liu Xiaobo is transferred to hospital with late-stage liver cancer. They demanded that Liu be granted the best medical care in China or abroad and criticised his treatment.

China's dissident community has expressed anger, shock and sadness that the country's best-known political prisoner – the democracy activist and Nobel peace prize winner Liu Xiaobo – has been transferred to hospital after being diagnosed with terminal liver cancer.

Liu, 61, had been serving an 11-year prison sentence for inciting subversion of state power. His lawyer, Mo Shaoping, who has been in contact with Liu's family, said he was now in the late stages of disease. Another of Liu's lawyers, Shang Baojun, said he had been diagnosed on 23 May.

In a statement, the Norwegian Nobel committee, which awarded Liu the prize in 2010, said: "Liu Xiaobo has fought a relentless struggle in favour of democracy and human rights in China and has already paid a heavy price. Chinese authorities carry a heavy responsibility if Liu Xiaobo, because of his imprisonment, has been denied necessary medical treatment."

Liu was arrested in 2008 after writing a pro-democracy manifesto called Charter 08, in which he called for an end to one-party rule and improvements in human rights. Following a year in detention and a two-hour trial, he was sentenced to 11 years in December 2009.

More than 1,400 political dissidents are detained in China, according to a US congressional database, but the number is probably higher because information about topics deemed sensitive by the ruling Communist party is heavily censored.

Since coming to power in 2012, the Chinese president, Xi Jinping, has overseen a wide-ranging crackdown on civil society, including the arrest of feminist activists, human rights lawyers and book publishers.